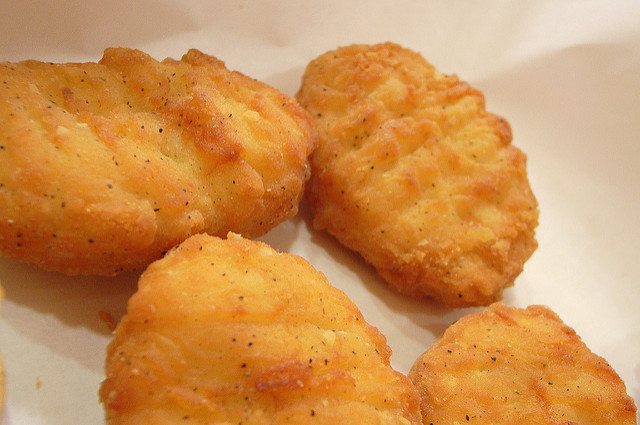 Bad news broke Monday after the U.S. Department of Agriculture announced a food recall for nearly 4,530 pounds of chicken nuggets product that was produced for Applegate Farms by food giant Perdue Foods.

Yes, you read that correctly, there may be small pieces of plastic in your chicken nuggets.

The recalled nuggets are a part of the Applegate Naturals Chicken Nuggets, which were produced during September of last year. Applegate Naturals Chicken Nuggets recalled their 8-ounce boxed packages with expiration dates before 09/27/2016. All the recalled packages contain a “P-2167 number inside the USDA mark of inspection. The company says that the packages were shipped out to retail distribution centers in Florida, Georgia, Indiana, Massachusetts, Pennsylvania, New York and Texas.

The problem wasn’t discovered by food giant Perdue Foods LLC until they received customer complaints that there chicken nuggets had pieces of small, solid, clear plastic inside the companies nugget line of Applegate Naturals Chicken Nuggets.

Fortunately there hasn’t been any reports of adverse effects from eating the plastic, aside from an unusual bland taste.

Over 4,000 Pounds of Chicken Nuggets Recalled Due to Possible Plastic Contamination https://t.co/KRMbBP5UFT pic.twitter.com/huXtLSaAYg

“At Applegate, we’re committed to your health and well being and making sure our products meet the highest standards – from the farm to your table. Consumers who have purchased these products are urged not to consume them. These products should be thrown away or returned to the place of purchase,” the company release states. “We’re committed to bringing your family the best products possible, and we appreciate your attention to this notice.”Perdue Foods isn’t the only company facing a recall for contaminated food over pieces of plastic. Just a few weeks ago, the candy producer Mars Company got hit with a recall because pieces of plastic were found in their chocolate.