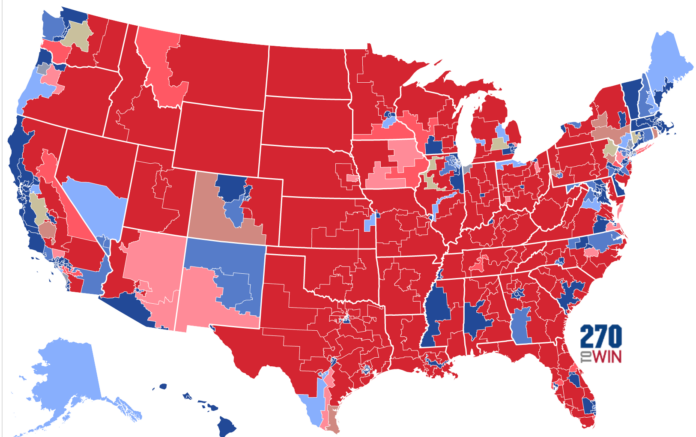 It’s Friday, November 11th, and neither party has won a majority in the United States House of Representatives. With most of the races set to gain clarity in the coming days and maybe weeks, now seems like a good time to go through the uncalled races and see where each party stands.

Those numbers reflect the races called by the Associated Press. However, there are some races they have not yet called that should be. Democrats have functionally won ten races that are not yet called. These ten are:

NY-18: All votes other than late-arriving mail-ins (they can arrive until Tuesday) and disputed ballots are counted. Pat Ryan has won.

MD-06: Don’t be fooled by the fact that Republican Neil Parrott is currently leading. The majority of the mail vote won’t be counted until next week. There are about 29,000 such ballots remaining, and given mail ballot results and the partisan mail rate in the district, David Trone should win them by a margin of 20,000-9,000 at worst for him. Parrott’s lead of almost 1,700 votes is a mirage, and it will evaporate.

CO-08: All the votes are counted in this district, and Yadira Caraveo has won by about 1,800 votes.

NV-01, NV-03, NV-04: Democrats currently lead in all three races, with a decent chunk of ballots remaining in Clark County. Republicans are hoping that these ballots–which are likely mostly mail-ballots that were dropped off on Election Day, not those that arrived by mail–are more Republican than mail ballots have been so far. If the Republican hopes are correct, that could possibly be enough to save Adam Laxalt in the U.S. Senate race. No matter what, though, it can’t get any of their House candidates to overcome their deficits. Susie Lee, Dina Titus, and Steven Horsford have all won.

CA-15, CA-34: Neither of these races are callable yet because the winner is in doubt, but they’re both between two Democrats. So no matter who wins them, Democrats get the seat.

ME-02, AK-AL: Neither of these races will be called any time soon because they go to a ranked-choice runoff instead of being called immediately, but the math is not there for Republicans to win either of these seats.

This puts Democrats at 202 seats, 16 shy of a majority. However, there are also two uncalled races that Republicans have won.

NY-22: As above with NY-18, all ballots are counted. The gap is about 3,900 votes, and there just won’t be enough late-arriving mail-ins or provisionals for Francis Conole to catch up. Brandon Williams has won.

CO-03: All the votes seem to have been counted, and Lauren Boebert has won by about 1,100 votes. Adam Frisch would even need to gain over 400 votes from provisional ballots (exceptionally unlikely) to even trigger an automatic recount.

So, the state of the race is 213 Republican seats, 204 for Democrats. Of the 19 remaining, Republicans need five for a majority, Democrats 14. Now it’s time to look at those 19 districts and see how they look. (I’ll be counting up from a Republican point of view as they are closer to 218 and it will give a better feel for where the odds of the majority lie.)

It looks very likely that Republican Lori Chavez-DeRemer has won this seat. Deschutes County seems to be done counting votes, and she is holding things very even in Clackamas County. The most important area in this district for Democrats is a sliver of Multnomah County (Portland). However, votes there seem to be exhausted. The county has reported all of its votes, and while mail-in ballots are allowed to arrive until next Tuesday as long as they are postmarked by Election Day, it’s unlikely we’ll see too many. 13,000 such ballots arrived the day after Election Day (in the whole county, not just this district), but that number trickled to only 400 by Thursday. Unless there’s a huge stash of ballots stuck in the mail somewhere, the county is basically done, which means that Chavez-DeRemer can’t lose.

This seat might surprise you being towards the top of the board, but it shouldn’t. Republican David Schweikert trails Jevin Hodge by a little under 4,600 votes. However, there should be close to 50,000 votes remaining, the vast majority of which are “late early” votes–an Arizona term for votes mail-in votes filled out at home and handed in to an election center on Election Day instead of delivered by mail. The clear trends in Arizona recently have been that the “late earlies” will favor Republicans far more than other early votes. Schweikert needs to win these votes by about 10% to win. Considering that he lost regular early votes by 12% while winning in-person Election Day votes by 50%, odds seem pretty good that he hits that 10% margin.

Incumbent Republican Ken Calvert has a history of underperforming a bit, and his seat got much less red in redistricting. Riverside County came in very strong for his opponent, Will Rollins, at the start, but the votes were reported the same way in the primary. As long as general election trends are even somewhat similar to primary trends, Calvert’s position looks closer than he’d be comfortable with, but not one he can lose from.

Michelle Steel currently leads by over 13,000 votes. And while the primary trends weren’t so favorable to Republicans from this point in Orange County, there is reason to believe that the votes weren’t quite counted in the same order this time, and that Republicans might be hiding a serious revival in the OC right now. Steel will likely win regardless, though it could get close if primary trends repeat themselves.

Republican Mike Garcia currently leads by over 16,000 votes in his bid to beat Christy Smith for a third time. Los Angeles County has a lot of votes left to count and the trends went heavily against Republicans in the primary (and in Thursday’s unscheduled vote drops), but that lead is pretty wide, and there might not be a ton left to count. It’s a strong lead for Garcia, but not a wholly comfortable one.

Republican Kevin Kiley has a history of electoral overperformances and currently leads by almost 10,000 votes. However, this district is really very tough to predict as it has so many varied communities and areas. On average, it trended pretty sharply away from Republicans in the primary as counting went on. If that continues, Kermit Jones has a real chance to come back.

This race is actually really simple. Joe Kent trails Marie Perez by a little under 6,000 votes. There are a few Republican counties with some vote left, so the lead should really be viewed as about a 4,000-vote lead. Clark County has 45,000 votes left to count. In the primary, the later vote was much more heavily Republican than the early vote (Washington counts votes in the order they’re received). That trend has continued throughout this district. So far, Perez is leading in the district by 14%–but that number was much higher before Thursday’s drop of 25,000 ballots was basically dead even. So, if Kent wins the final 45,000 ballots by about 9%, he’ll come back and win. Otherwise, he’ll fall short.

Like with AZ-01, don’t be surprised where this is on the list. Republican Juan Ciscomani leads Kirsten Engel by about 5,400 votes. However, Pima County likely has around 70,000 votes left in this district. It seems that about 40,000 of those are early votes, and about 30,000 are “late earlies.” So far, Engel has won the early votes by close to 20% in this county. The early votes are enough to give Engel the lead. However, Cochise County has about 6,700 “late earlies,” which should skew heavily towards Ciscomani (it would not be surprising if he won them by over 40%). Assuming Cochise cancels out about the extra lead that Pima earlies gain Engel, this will entirely come to who wins the Pima County “late early” votes. That really could go either way (Ciscomani easily won Election Day votes in the county), but Engel is likely in a slightly better position.

There’s not too much to say about this one. Scott Baugh’s hopes of knocking off Katie Porter rest on the aforementioned possibility that the remaining Orange County vote is much redder than the vote we’ve seen counted so far. If that’s true, Porter is in serious trouble. If the general follows the same trends as the primary, Porter should survive.

This is a similar situation, with a slight twist. Mike Levin and Republican challenger Bryan Maryott are each doing about the same (up 12%) in their base counties–Maryott in Orange, Levin in San Diego. Fortunately for Levin, the San Diego County part of the district has about 70% more people than the Orange County portion. For Maryott to come back, he either needs the Orange County part to become significantly more Republican (as we’ve discussed in several races above), or he needs the later San Diego votes to not be as blue. Not impossible, but Levin is probably feeling okay about his chances right now.

It’s really hard to say much about this district, with so much left to count. It’s also tough to judge too much from the primary, as the dynamics in that race were different than this one. Rudy Salas did gain pretty heavily as counting went on in the primary, so it’s difficult to gauge how safe David Valadao’s 3850-vote lead really is.

Republican John Duarte has consistently gained in updates since Tuesday night, but this district is still very tough for him. It trended heavily away from Republicans in later counts in the primary, and a lead of under 300 votes doesn’t seem at all safe unless counting trends are different in November (not an impossibility), or unless his campaign gained serious crossover appeal in the final five months of the campaign (also not an impossibility). Either way, Adam Gray likely should feel more confident here, deficit notwithstanding.

Republican Mike Erickson put up a strong showing in a district that probably shouldn’t have been so competitive, but it’s hard to see a path to him winning from here. The bulk of the remaining vote is in Washington County, which Salinas is winning handily. There are some votes left in Erickson-friendly Marion County, but not nearly enough to cancel out what’s left in Washington, let alone reverse a 4,000-vote deficit. This race is borderline call-able for Salinas.

This race should likely be called already. Democrat Greg Stanton’s lead over Kelly Cooper is just under 29,000 votes. Even if Cooper wins the “late earlies” by the same 32% margin he won the in-person votes, he would need there to be 90,000 votes left in the district to win. The 90,000 total is unlikely but not impossible, but that margin is unreasonable. Unless something astonishing happens the rest of the way, it’s tough to see Stanton losing.

This last batch of six seats are uncalled California seats that the Democrats should win, though Republicans are technically not out of it if ballot-counting patters shift. Some of these, perhaps, are somewhat closer than others (it would take much less of a drastic shift to see CA-26 flip, for example), but all of these are likely off the board for Republicans.

So Republicans seem a bit favored to take the House. Their path to 218 is much simpler, and they likely have the easiest path to around 220 seats, though it starts to get tricky to be confident about a 221st seat. Democrats seem to have a floor of about 212, though (barring any big surprises in California), so the GOP is looking at an 11-seat majority at maximum, and probably a few less than that.