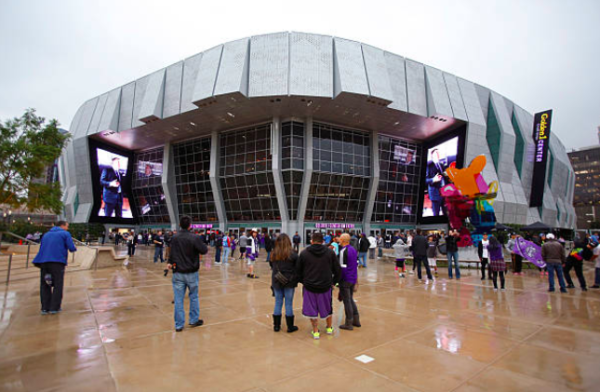 In today’s world, the traditional sports stadium experience just doesn’t cut it. Gone are the days when overpriced beers, sports snacks, and communal cheering in the stands were enough to satisfy fans. With home entertainment systems becoming more advanced, fans are able to watch players from every angle, in high-definition, all from the comfort of their homes. Technological advancements have made watching a game at home an immersive experience, with the added benefits of cheaper drinks and refreshments, no long lines for the bathroom, and none of the hassles of parking. Simply put, sports arenas today aren’t competing with other areas — they’re competing with the comforts of home.

With this in mind, sports stadiums have had to up their game in recent years to lure fans from their couches. While technology has revolutionized home entertainment, today, it is also being used to transform stadiums and arenas. An example of this is the famous new Tottenham Hotspurs stadium, that is in its final stages of construction. As stated in an article in The Guardian, “The 61,000-seat behemoth will feature the longest bar in the country, heated seats with built-in USB ports, a glass-walled tunnel so you can see the players before the game and even a “sky walk” allowing fans to clamber over the roof of the arena.” Apart from premium seat tickets, the stadium will offer membership to its exclusive H Club, which allows for guests to store their personal vintage alcohols in a temperature-controlled, purpose-built on-site reserve.

In addition to lavish catering, the field also has unique features. This will be the first field to be split into three parts and slide under seating stands, with an astroturf field beneath for American football. Slated to be the most technologically advanced stadium in the world, architect Christopher Lee — from Populous, the firm behind the stadium’s design — says that the stadium must “provide a reason for people to get off their sofas and leave their 50-inch flatscreen TVs” — and judging by what’s been promised, it certainly will.

So what’s next for the future of stadiums? Populous, in a joint effort with National Geographic, has envisioned what is called “The Stadium of Tomorrow.” The global firm has conceived a “self-sustaining, highly connected and versatile arena that is more of an eco-village of sport and recreation than a traditional football stadium.” Whether it’s creating a multi-experimental ecosystem incorporating LED and augmented reality to bridge the gap between players and the fan, or the potential for an underground viewing area, the Stadium of Tomorrow is a vision that has it all. Amenities are envisioned to be completely automated, with drones delivering refreshments to one’s seat, and robots clearing up garbage. Since late 2016, drones have taken the business world by storm and, considering their capabilities in delivering goods and even relief packages, these implementations to stadiums don’t seem so far-fetched.

Ultimately, while all these possibilities might take a while to be turned into one cohesive actuality, the technology to incorporate some of these ideas already exists. For instance, in its bid for the 2022 World Cup, Japan promised to record games in “360 degrees with 200 HD cameras and broadcast them around the world live in 3D, allowing players to appear in hundreds of stadiums simultaneously as holographic projections.” This is a whole new way of viewing games, with fans in other countries able to watch holographically projected games from across the world in their local stadiums. While Japan may not have won the World Cup bid, it is America that shows much promise in developing the stadiums of the future.

Consider Golden 1 Center, home of the Sacramento Kings. Although unassuming from the outside, this arena is built to support 20 to 30 years of dynamic technological advancement. According to experts at Ohio University, “650 miles of fiber-optic cable and more than 300 miles of copper run throughout the stadium like a central nervous system, providing for 100’s of WiFi access points (points where wireless internet is spread). There is enough connectivity to handle 500,000 snapchats being sent and received within the stadium.”

Secondly, the Sacramento Kings app seamlessly syncs stadium capabilities directly with a fan’s smartphone. The app shows fans available parking spots and even guides fans to their exact seats so as to relieve walkways. Boasting an 84-foot digital screen visible from every seat, Golden 1 Center is also eco-friendly and entirely solar powered!

There’s no doubt that technology is changing stadiums for the better. Slowly but surely, advanced features such as the ones listed above will start to become commonplace in arenas around the world, in turn, enticing fans to leave the comfort of their homes to view sporting events. Whatever the stadiums of the future bring, one thing is for sure — the sports viewing experience is set to be revolutionized.