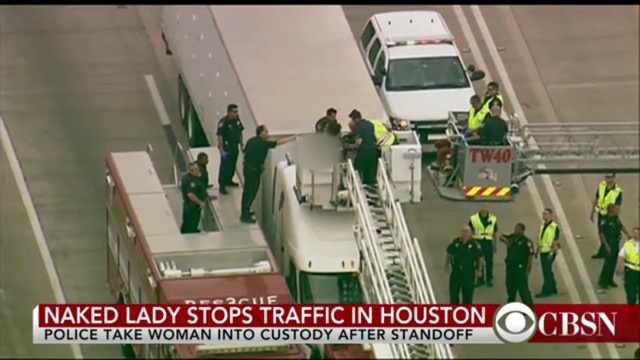 In Houston, Texas a naked woman was dancing on top the cab of an 18-wheeler for two hours before area responders coaxed the nude dancer off the truck.

Houston area emergency responders used a fire truck ladder to reach the unidentified woman off the truck on Monday morning. Officials still have no clue what caused the bizarre public display.

A CBS affiliate got a birds eye view when vehicles were seen slowing down to get a glimpse of the woman dancing on the big rig.

Authorities are unsure what sparked the woman to get on top of the cab and dance without any clothes on. They are also unsure if the woman was ever inside the big rig before a three-vehicle accident was caused nearby.

CBS affiliate KHOU did report that the woman is believed to be the driver of one the wrecked cars.

Traffics was stopped along a large stretch of freeway. Officials detained the woman but did not say whether or not she was going to be booked for any charges.

If there is anything that we do know, it’s that “only in Houston, Texas” would this happen.