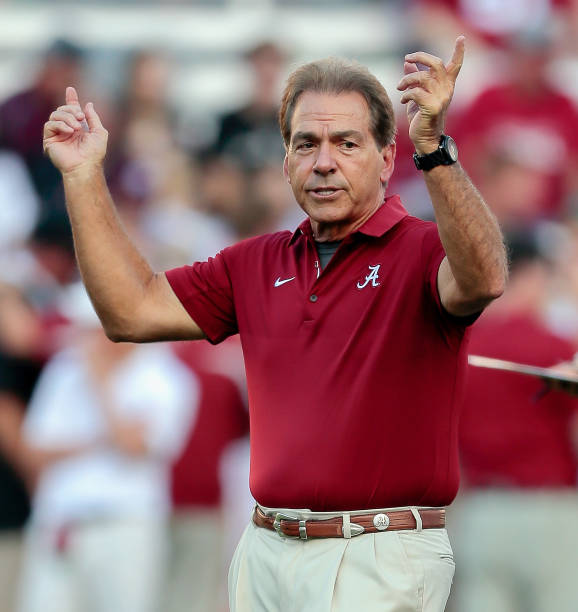 Nick Saban is beloved by around half the state of Alabama that prefers Crimson and White over Blue and Orange, but that popularity and public fame did not translate into a significant number of write-in votes in Alabama’s crazy Senate special election. Of the 21,000 write in votes cast by voters who couldn’t stomach the choice between now-Senator Doug Jones, a Democrat, and former State Supreme Court Judge Roy Moore, a Republican, Nick Saban has thus far tallied only 264 write-in votes, with 41 of Alabama’s 67 counties having reported their write-in ballots. Out of 21,000 write-in votes, that’s hardly substantial, and pales in comparison outgoing Republican Senator Luther Strange, Republican Congressman Mo Brooks, and military veteran Lee Busby, all of whom have already tallied 1,000 or more write-in votes. Strange has over 5,000 votes and Busby well over 3,000. Busby was the only choice who actively solicited support for himself, and he did generate some media prior to the election.

Write-ins didn’t end up impacting Jones victory, as he won by enough votes it can be argued he would have won anyway, even without some Republicans and Independents voting for Strange, Busby, and Brooks rather than Moore. Those Republican holdouts include Alabama’s Senior Senator Richard Shelby, but it was still interesting to see what voters would end up doing.

Saban has no reason to be disappointed though; he has never actively solicited political support for himself, and still has a national championship to play for in a few days as the Crimson Tide will take on Clemson in a rematch of last year’s title game, though this time the game is a College Football playoff semifinal.

The media, however, should take some responsibility for parroting the claim that Saban got significant support in the Senate race, either by picking up on fringe voters who advertised they cast a ballot for Saban, or outright claiming Saban got a vast majority of the write-in votes without proof (as Michigan Live did) after the polls closed. Reporters need to learn more about the elections reporting process before they start running with a headline.

Should Saban decide he wants to take his obsession with excellence on the gridiron to Washington, he’d have good company in former Nebraska Coach Tom Osborne, who became a Congressman for multiple terms after achieving legendary status in Lincoln as a National Championship winner. Former Congressman Heath Shuler, former Alabama Governor Fob James, and one-time Presidential candidate and Senator Bill Bradley also achieved political success after first making a name for themselves in the world of sports.

Democrats would love Saban to reveal himself as a member of their team, and pursue politics, given they normally face long odds in Alabama, but first he may need to remember when election day is.