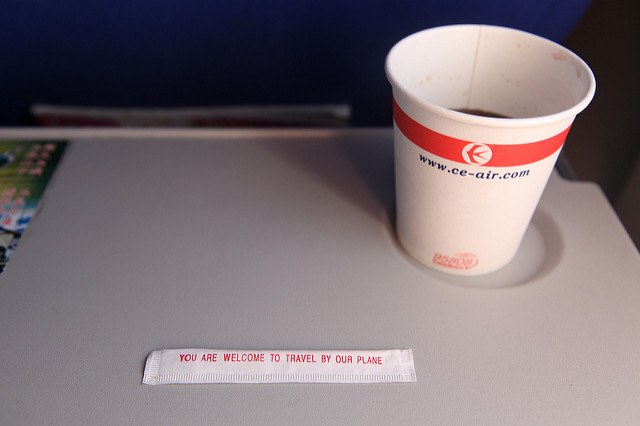 A few weeks ago, airline employees posted some industry secrets on an Ask Reddit thread, about why their coffee tastes so bad. One user named Muddbutt7 wrote:

“Sometimes, the vehicle that fills the potable water for washing hands and making coffee is parked next to the vehicle that is used to dump the [toilets] and fill the blue juice for the lavs. They’re not supposed to. Sometimes, they’re parked at a distance from each other, which is policy, yet the guy who is filling the water is using gloves that he hasn’t changed in over 2 years.”

“The coffee is absolutely disgusting because no one washes the container that goes out every morning. The station agents who get paid way too little don’t give a [expletive] about cleaning it. I certainly didn’t when I worked for AA. Also, because we weren’t given the proper supplies to clean it. We pretty much just rinsed it out and dumped coffee into it.”

Now you could be saying to yourself that anybody could have posted those claims, and you’re right. For this reason, Huffington Post questioned the statements by seeking out former airline employees.

“It is true that the potable water tanks are not cleaned. But they are only filled with potable (drinkable) water, so it’s not like there is old coffee in a big container somewhere. The water doesn’t make for an excellent cup of coffee, but it’s not unsafe.”

It’s the water that’s making your coffee taste bad. Years ago in 2004 The Environmental Protection Agency stepped in and began to investigate that safety of airline water. Unfortunately the results weren’t good as the agency discovered that the water in 1.5 out of every 10 planes tested positive for coliform bacteria.

Nine years later NBC 5 conducted a “checkup” on airline water and discovered that 12% of the tested planes had at least one positive test for coliform.

While the EPA has yet to report any cases of passengers getting sick from the water onboard the plane, they have concluded that the water tanks and its hoses can be pretty gross.

In 2013, former US Air employee John Goglia wrote an article on Forbes called “Why Airline Crews Skip the Coffee and Tea On Board.” In his article Goglia said:

“Thirty years ago when I was working for USAir, we began a process to bleach the water tanks that hold the water and flush out the system. This was done on a regular basis. Yet, it was clear to anyone working on these tanks and their hoses that a lot of sediment was accumulating in the system, sediment that was akin to pond scum. Even after the tanks were bleached and flushed, some sediment always remained.”

Skeptics such as the folks over at Cornell University believe the loud and inescapable sound of cabin noise affects the way we taste food during flight.

Despite this claim, you may want to get your coffee before flight.