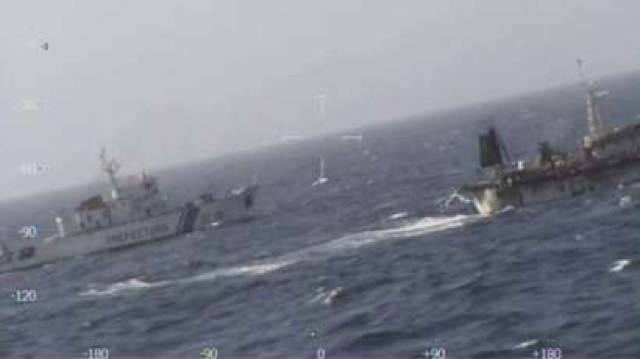 Argentina’s coastguard pursued and sank a Chinese vessel that was reportedly fishing illegally in Argentine waters this past Monday.

The real life game of battleship began after the Argentine coastguard fired warning shots at the Chinese boat “Lu Yan Yuan Yu 010” as it made its way towards for international waters.

The coastguard attempted to get a response from the Chinese vessel before firing upon the boat. All 32 of the Chinese crew members were rescued from the boat.

The sinking has come with its fair share of controversy after China expressed a serious concern over the sinking of their water vessel.

A spokesman for the Chinese foreign ministry said that Beijing has “made urgent representations” to Argentina that demands a thorough investigation of the incident.

Apparently illegal fishing is a growing problem in the Southern Atlantic.

In the statement by Argentina’s coastguard, they said:

“The vessel was hailed over radio and both visual and audio signals were sent to make contact. However, the vessel turned off its fishing lights and proceeded to flee towards international waters without responding to repeated calls over various frequencies. On several occasions, the offending ship performed manoeuvres designed to force a collision with the coastguard, putting at risk not only its own crew but coastguard personnel, who were then ordered to shoot parts of the vessel.”

China is the world leader in the seafood market and currently possesses the largest long-distance fishing fleet that exceeds 2000 vessels.

This isn’t the first time a Chinese vessel has had a run in with the coastguard of Argentina. Back in 2010, the coastguard captured two Chinese vessels that were illegally fishing for squid in an exclusive economic zone. The altercation caused warning shots to be fired but no damage was caused.

In 2012, Argentina captured two Chinese vessels it said had been fishing illegally for squid in its exclusive economic zone. Warning shots were fired.

The incident also comes at a time where Argentina and a China have been cultivating a better relationship.