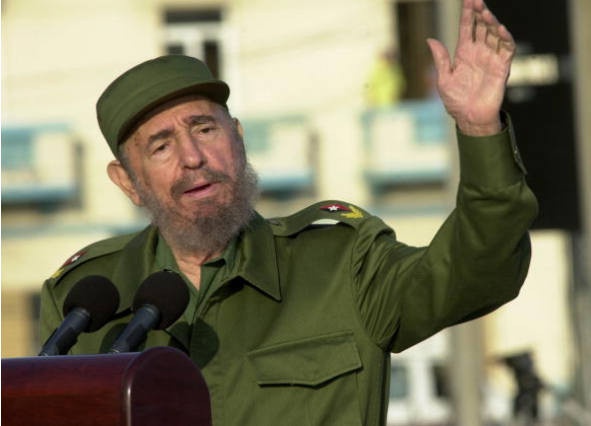 The once both admired and detested former Communist Leader, Fidel Castro (1926-2016), passed away in the early Friday evening on November 25th, 2016, at the age of 90 years old. Since his death was announced on the news on Friday night, many Cuban people in exile in Miami, Florida rejoiced at the death of their former repressor and dictator who ruled the island of Cuban, whose reign began in the 1960s. The Communist Party was once dominated by the Fidel Castro regime of repressed freedom of speech, expression, and human rights depravity.

Since the overthrow of the Batista regime in the early 50s and 60s, Fidel Castro was known to be a revolutionary, a ruthless leader, and a shaker of political will. Castro envisioned to take down the former President Batista, and did not establish a democratic state. But instead, he brought a brutal dictatorship of human right repressions, civil liberties, and imprisonment for dissidents who were enemies of the state. Fidel Castro made his name in the early guerilla warfares to overthrow the Cuban government.

Castro’s plans were to rule Cuban and instill his strong belief in Marxism and Communism following the footsteps of the German philosopher, Karl Marx, who wrote “The Communist Manifesto” in 1848. Fidel Castro wanted to transform Cuba into a control state of propaganda, repression of human right activists, and jailed dissidents who opposed its dictatorial regime and fought Communism on the ground. He also wanted to create a working class of workers called the “proletariat,” in which the state controls the means of production and the wealth of goods and services redistributed to employees and citizens by the centralized state on a bright even field.

Many Cubans in the ’50s decided to exit the island where freedom was a previous view of bittersweet revolution of Cuba, which drove many citizens to escape Castro’s net of opposers, dissidents, and defectors. In the 1960s, the Cuban Missile Crisis emerged as one of the most strategic decision between Russia, the United States, and Cuba. The island of Cuba favored Communism so was the former Soviet Union ruling under the President, Nikita Kruschev, who did not like the United States’ spread of capitalism and worldwide acceptance of democratic ideals.

AHistory Channel Documentary released a declassified file on Fidel Castro, and an emblematic quote still resonates today in the minds of millions of Cubans, “If surviving assassination were an Olympic event, I would win the gold medal.” The former leader and Communist icon who received many assassinations attempts who wanted Castro dead from his infamous regime. There are witnesses that said that life in Havana was beautiful, where cigars, alcohol, freedom of going out, and enjoying life in Cuba, was the ideal time for Cubans to thrive and prosper. But underneath that, there was military, economic, and a political revolution and Castro rose to power by jailing dissidents opposing his new ruling power was a fearless leader who will pursue his dream of the Communist Party at all costs.

The Washington Post reports, ” Mr. Castro, a romantic figure in olive-drab fatigues and combat boots, chomping monstrous cigars through a bushy black beard, became a spiritual beacon for the world’s political far left.” (26 November 2016). His religious belief was to metamorphose the island of Cuba into a haven for the world’s poor in fighting poverty and proving education nationwide to those who could not be educated formally. From the same source, “His admirers said he educated, fed and provided health care to his people, as well as to the poor in other countries, more equitable and generously than the world’s wealthy nations, most notably what he called the ‘Colossus to the North.’”

Castro grew up in a poor environment, and his desires were to abolish poverty and save the people of Cuba from the ruling of the Batista regime. It is understandable that the former leader wanted revolutionary changes for his country, but it quickly turned into a dragnet of pursuing enemies of the state and foreign journalists were imprisoned in jail cells in which conditions were beyond deplorable. For more than 50 years the United States imposed economic sanctions and blockades, rendering the island to limited supplies and open economic diplomacy onto the rest of the world.

Since Cuba became a significant Communist island, threats of Communist attacks as a destabilizer of democracy was a substantial threat to global peace in America’s eyes. The United States imposed economic sanctions, and blockades were rendering the island to limited supplies and open economic diplomacy onto the rest of the world. Chicago Tribune reports,” In March, Barack Obama became the first sitting U.S. president to visit Cuba since 1928; he has called on the U.S. Congress to end a failed 52-year trade embargo against Cuba. As the changes unfolded, the ailing elder Castro was mostly silent and rarely seen.”

President Obama’s idea was to re-open diplomatic and economic ties with the former Communist island and as a result, allows Cuba to re-emerge as a power. Cuba today is introducing a new democratic establishment branch of promoting small businesses, open tourism, and allows international flights to land on the island. The brother of Castro, Raoul who is the actual Cuban President, is a believer in his brother’s idealism of Communism, but with more openness and less aggressive policy reforms which could help the state to be an open society for peace, prosperity, and freedom.