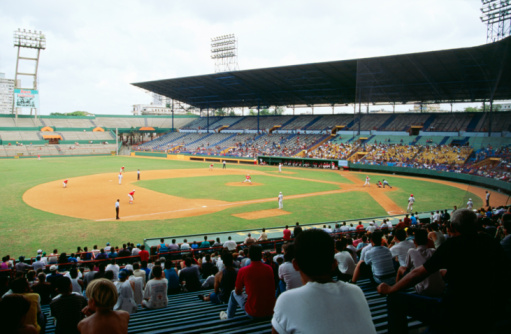 The death of Fidel Castro will have ramifications in many arenas of life in different parts of the world, but no sector of culture in the United States of America could be more affected than Major League Baseball. While there is a bevy of unknowns, there is solid reason for cautious optimism that MLB could not only grow its product but that in doing so, MLB’s structure in Cuba could become a model for future economic exchanges between the United States and the island nation that Castro once dominated.

Despite the fact that Castro had officially been out of power for eight years already – he ceremonially transferred power to his younger brother Raul Castro in 2008 – his influence on all matters concerning Cuba was still very strong. It could also be argued that the transfer of power was simply that, ceremonial, and not actual. This has been most obvious in Fidel Castro’s responses to the United States’ attempts to normalize relations with Cuba.

The widely-publicized visit of U.S. President Barack Obama to Cuba was just one of several moves to normalize relations. The United States has also re-opened its embassy in Cuba. Obama rescinded a restriction that limited Cubans living in America to visiting their home land once every three years. He also repealed a restriction that put a cap on the amount of money Cubans in America could send back to Cuba at $300 per year.

After staying mum through most of these changes, Castro issued a statement shortly after Obama’s visit, saying he doesn’t trust the politics of the U.S. and the Cuban people don’t need anything from “the empire.” Castro also reintroduced price controls on agricultural products, which could be perceived as “tightening his grip.”

It’s clear that Castro opposed the expansion of any American entity in Cuba, including MLB.

Changes in Cuba in Concert with Improving Relations

Despite Castro’s obtuseness toward American enterprise in his country, there has been some momentum building toward that exact thing that Castro opposed.

The first aspect of the situation to consider is the changes that have been made in Cuba. Using whatever amount of power Fidel actually gave Raul, Raul has used that to effect significant reforms. In the past eight years, Cubans have been granted the freedoms to own computers and cell phones. They have become able to sell their own cars and homes, and purchase those items from other Cubans. They now have the ability to travel freely within the island.

Most remarkable, however, are a couple of major economic structure changes. The list of privately-owned businesses that Cubans have been able to start has expanded. A larger list of service providers such as barbers and taxi drivers can now sell those services directly to customers.

The combination of Cuba/U.S. relations gravitating toward normalcy and expanded economic freedom in Cuba has led to minimal, but encouraging for interested parties, economic exchange.

Primitive Economic Exchanges Between the U.S. and Cuba

Since these events have been set in motion, American investors have been working toward embracing a new market; Cuba.

Then there was the Tampa Bay Rays‘ exhibition game with the Cuban national team that coincided with Obama’s visit and the fact that commercial flights to Cuba from the U.S. actually exist again.

Cuban-American businessman Mike Fernández has gone on the record saying that he believes the value of the Cuban economy could spike to as much as $350 billion within 15 years. Given the island’s reputation for turning out talent and the optimism regarding the economic potential, it’s not hard to understand why MLB is interested despite the challenges it is facing in Cuba.

While some restrictions governing trade have been lifted, the meat of the U.S. embargo on trade with Cuba remains intact. Additionally, there are obstacles from the Cuban government that would have to be overcome as well. Finally, the current system of acquiring talent from Cuba needs significant reform.

The U.S. embargo still outlaws any commerce by U.S. entities that will result in money being placed in the hands of the Cuban government. Effectively, that would inhibit MLB from paying salaries to Cubans for any products and/or services which the Cuban government could tax. In an economy where most of the country’s goods and services are still nationalized, it’s going to be hard to circumvent that legal obstacle.

There are also legal obstacles to getting the “products” that MLB is most interested in as far as Cuba goes, the on-field talent. The Cuban Adjustment Act of 1966 and the 1995 amendment which created the “wet-foot, dry-foot policy” still act as one of the biggest barriers to Cuban players emigrating to the United States. While it allows for Cuban immigrants to receive special treatment as far as applying for green cards is concerned once the players have arrived on U.S. soil, it also makes the actual act of entering the United States a more treacherous endeavor.

Those situations have produced a nightmare for Cuban players who are brave enough to attempt the migration to the United States. Coercion, kidnapping, and violence are all part of the story of Cuban players’ journeys, often at the hands of agents like Bartolo Hernández who act as the go-between for the players and MLB franchises.

Despite the challenges, the MLB has been working to create a system that meets the legal stipulations of both countries and stymies the smuggling rings which have created terrifying scenarios for MLB prospects.

MLB’s Efforts to Create a Work-Around

MLB has submitted a proposal to the United States’ Treasury Department for review, which in theory would allow Cuban baseball talent to sign contracts with its member franchises directly.

According to Ben Strauss of the New York Times, a board of Cuban entrepreneurs, league officials and players’ union representatives would be formed. The board would act as a clearing house for Cuban talent and facilitate the signing of the players by MLB teams. In exchange, a percentage of the salaries would be paid back toward the non-profit organization which would use the funds to support youth baseball, education and the improvement of sports facilities in Cuba.

Comments by the president of the Cuban Baseball Federation, Higinio Velez, make the stance of the Cuban government clear. “We hope that in the future, Cuban players can go anywhere in the world and play, representing their federation, and that there are not intermediaries that take advantage of them.”

While not opposed to Cuban players playing elsewhere, the CBF’s desire is for them to do so under the banner of the CBF, not for any other organization. Additionally, it’s possible that Cuban officials could view MLB franchises as responsible for individuals like Hernández, if not the “intermediaries that take advantage of them” themselves.

Possible Outcomes for the Future

As the structure of this potential new system is being negotiated, it’s possible to speculate on its eventual form. Could a “loan system,” like the one often used by European football clubs, be something that MLB could work out with the CBF? While the U.S. embargo would have to be lifted or the CBF would have to disassociate itself with the Cuban government for that to work, it would satisfy the desires of the CBF for its talent to play “representing their federation.”

Could MLB sell itself to the Cuban officials as an international business, citing its Canadian presence and express a desire to facilitate the creation of a Cuban franchise? If the investments used to create a Cuban MLB franchise were made by Cubans, even the Cuban government itself, the U.S. embargo would have no jurisdiction over such activity. There would be legal issues to wrangle in regards to Cuban players coming to the U.S. and earning a paycheck that would be taken back to Cuba, and with MLB’s revenue-sharing system, but in theory the embargo could not prevent a Cuban baseball team from applying for membership in MLB.

Because Fidel Castro has died, and his ideology that has stood as a barrier to the progress of American enterprises like MLB is no longer supported by the power of his living persona, all this speculation about what MLB in Cuba could look like in the future becomes more realistic.

While there is still much yet to transpire in order for MLB to have a robust presence in Cuba, some of the groundwork has already or is currently being laid. Castro’s death means that if there has ever been a time appropriate for optimism regarding MLB’s future in Cuba, that time is now.