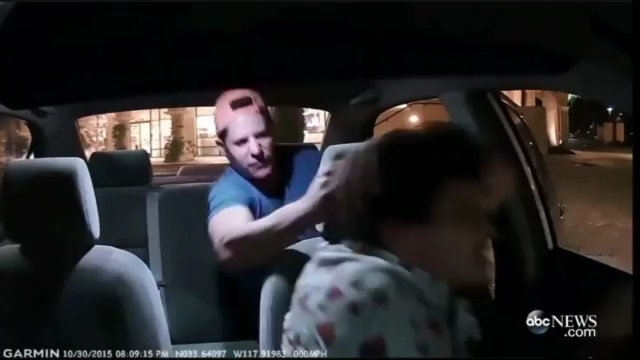 The drunk Taco Bell executive who was caught on video assaulting an Uber driver after he was fired from his job is now suing the driver for 5 million dollars.

Benjamin Golden, a 32 year old former executive accuses Uber driver Edward Caban of illegally recording Golden’s assault on October 3oth. Golden argues that he should not be blamed for the injuries that Caban suffered during the attack.

The claim comes after an emotional Golden cried during a CBS L.A. interview where Golden claimed he had no recollection of what happened that night.

In the interview Golden said:

“[I’m]sincerely sorry. I’m ashamed to say I got to that point. I don’t normally do that and this is a situation where I did. I handled it wrong in a wrong way. I crossed the line. It was caught on camera. I have to face it.”

After this a Taco Bell spokesperson said:

“Given the behavior of the [Golden], it is clear he can no longer work for us.”

During one portion of the video, the driver, Caban pulls over the car and turns to Golden and tells him that since Golden isn’t giving him directions he needs to get out of the car. After refusing, Golden slaps Caban across the face and then is maced

Golden was later arrested by police and charged with multiple misdemeanor charges of assault and battery.

Golden’s lawyer Courtney Pilchman says that the video evidence should be disposed of because California law states that it’s illegal to record someone in the state without their consent. But Caban’s attorney says that it only applies to audio recordings, not video.

Since the attack, the video has gone viral and in many people’s minds Golden is guilty. However, Golden claims that the video has caused him severe emotional distress and it’s Caban’s fault for picking up an apparently drunk Golden.

It’s crazy how Golden is trying to rationalize his drunken rampage that caused personal injury to Caban. Let’s hope that Caban wins this lawsuit and his other one.