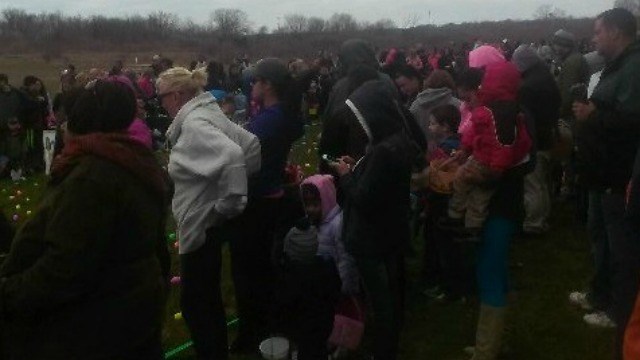 An annual Easter Egg Hunt in Orange, Connecticut that was sponsored by Pez turned into a shoving and fighting match after aggressive parents ignored the rules and sent the event into chaos.

Saturday’s event drew hundreds of area citizens, including a group of entitled parents who failed to wait for the start and ended up overwhelming the Pez employees supervising the hunt.

“rushed the field and took everything.”

West Haven resident Nicole Welch, one of the parents at the event said:

Originally the staff placed 9,000 eggs on three different fields to stagger group start times. However, things quickly fell apart after people started going from field like “locusts” as Peterson said. Within minutes, all of the 9,000 Easter Eggs were gone and the event hadn’t even started yet. Shawn Peterson also said that some parents trampled other children and stole Easter baskets during the chaos.

“people chose to enter the first field prior to anyone from Pez staff starting the activity. The crowd moved to the second field, waited for only a couple of minutes and proceeded to rush the field without being directed to do so and before the posted start time,” Pez officials said in a statement on Saturday.

The statement went on to say that the unfortunate situation was a mess caused by a few impulsive individuals.

“We made efforts to get everyone something before they left and passed out tons of candy and coupons and the front entry and tried to make the best of an unfortunate situation. Due to the actions of a few, the good intent quickly turned into a mess. I would like to sincerely apologize to each of our guests, this was not something created to frustrate or make people angry. We only wanted to do good for the local community,”

Although no injuries were reported from the event, it’s situations like these that leave a sour taste in some peoples mouths. Furthermore, it’s absurd that a few entitled parents thought rules do not apply them and opted to start stealing Easter baskets from children for personal gain. The entitled parents took a fun event for children and made it about themselves and it’s just sad that a few idiots stole the spotlight.