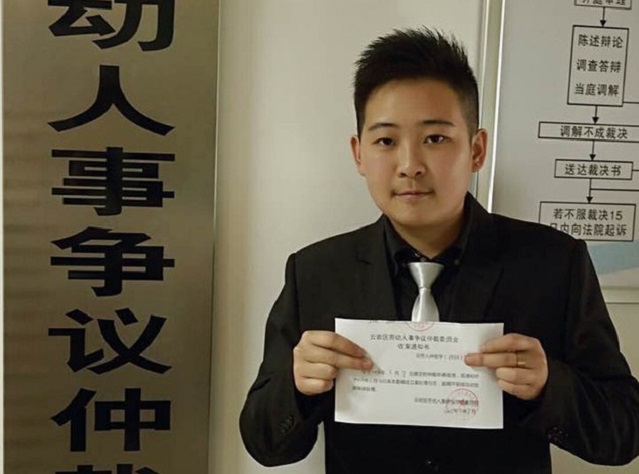 A transgender man who calls himself “Mr.C” for the sake of privacy filed a complaint with an arbitration committee in China after a former employer fired him for wearing men’s clothing in the office.

Mr. C has said that:

“They say I’m a lesbian, and that I damage the company’s image,”

Mr. C said he went a long period of time without knowing that he had legal options to sue for unlawful termination. Currently China, one of the least progressive societies has no labor laws that protect transgender people. However, after attending a legal panel back in January held by the Wider Pro Bono Legal Service, learned that he had grounds to sue. At the event Mr. C met his eventual lawyer Huang Sha and they now claim they have voice recorded interactions between Mr. C and his former boss.

There is only one clause in China’s Labor Law  that uses the word “sex”. The law states:

“Laborers shall not be discriminated against in employment due to their nationality, race, sex, or religious belief.”

The country’s legislature, The National People’s Congress has been battling labor law reforms that would protect transgender individuals from being discriminated against and shield them from lower pay. However, Sha does not think that the law will ever be passed.

Sha has said that “This is an invisible issue for the government,”  as he cited a recent example where a Chinese reporter asked a government official about gay couples’ right when it comes to domestic violence and the official denied the existence of same-sex couples in China.

When Sha was asked about his client he said:

“My litigant is a transgender man, but in mainland China, nobody really know what that means. His ID card [which shows his gender] is female, but he dresses like a man, so the sales manager suspected that Mr. C is gay.”

The OutRight Action International says that in China, police harassment against transgender people is common and that trans people have trouble getting jobs. In 2009, the country even put into effect certain standards on getting reassignment therapies. One such regulations require that a person must be at least 20 years of age, unmarried, inform family members about the surgery, which can be an in issue family members are no longer living.

Even though this case is outside of the United States, we should realize that some societies still deny the idea first that transgender people exist and second create no protections for transgender people because they are considered outside the norm. This case could quite possibly be a landmark for China and should put the world on notice of the continued oppression of those in the transgender community