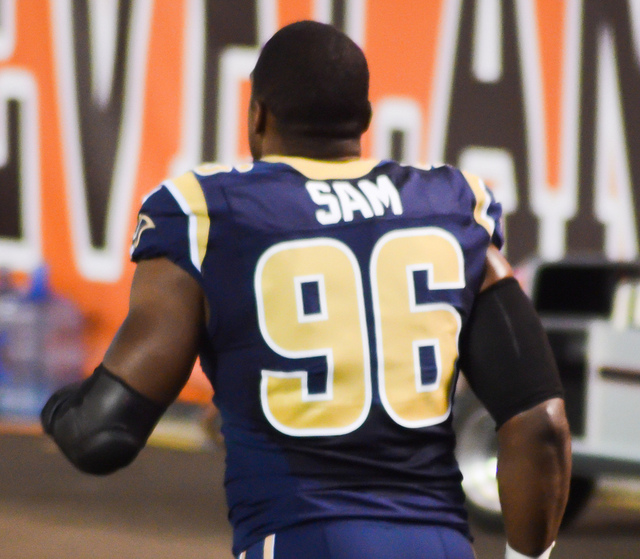 A few days ago sports radio and sites like deadspin published reports that the St. Louis Rams drafted openly gay football player Michael Sam so they could be avoid being featured on “Hard Knocks”.

The reports said that St. Louis Rams made an under the table deal with the league. Both suggested that the NFL attempted to rig the draft and socially engineer for public relations purposes and profit.

A report by Howard Balzer said:

“It’s been almost two years since the St. Louis Rams selected defensive end Michael Sam in the seventh round of the 2014 draft At the time, the Rams were hailed for being progressive and drafting the first openly gay player in the National Football League. It turns out, according to multiple sources, that the league agreed not to ask the Rams to appear that year on HBO’s yearly summer series, HARD KNOCKS, if they drafted Sam.”

The timing comes at a point as the formerly known St. Louis Rams set up shop in Los Angeles. Some have said that the report was foolish and a lousy attempt by former Rams employees who were fired as the team uprooted.

Balzer implied that the NFL was the mind behind the deal but that could just be his interpretation.

However, with that said, the Rams denied any involvement in a shady deal.

“That in itself is absolutely absurd, it’s 100 percent incorrect,”

Sources then told yahoo sports that the Rams decision to draft Michael Sam was made by the coaching staff and front office in the spur of the moment. The decision did not involve the team owner whatsoever.

Kroenke did not learn of the Michael Sam pick until a phone conservation with Jeff Fisher. The phone conservation account can be back up by Michael Sliver of NFL.com. Silver was imbedded in the Rams war room and said Kroenke was not there. Silver said that the Sam pick wasn’t going to happen until the Rams until it was known that they had consecutive seventh round picks.

Silver said that Jeff Fisher never left the room at any point to take private calls and that ownership would have been contacted if there was any shady deal happening.

After Fisher called Kroenke, the teams owners said he was all for drafting Michael Sam and showed no signs of other motives.

“We had three seventh-round picks. When we drafted Michael he was the best player on the board. Who in their right mind would think that you give up a draft choice to avoid doing something like that?”

Furthermore, it makes sense that the NFL would want to satire the Rams on Hard Knocks because of the market change and profitability potential of the Rams move.

The Atlanta Falcons, a market twice as big as St. Louis was featured in 2014 on the show. This makes it a very unlikely possibility that the Rams were even an honorable mention in the shows choice.

Balzer said that the Rams drafted Sam because the media wouldn’t want to report on the Rams because they drafted a gay player. So he claims they distracted the league by drafting Sam because it would take the spotlight away from them, even though it did the opposite.

Balzer put on his tinfoil hat when he said:

“There is no direct evidence that the teams picking after the Rams were urged (told?) not to draft Westbrooks, but would anyone be surprised if that was the case as a thank-you to the Rams for taking everyone off the hook?”

It’s inconceivable that the NFL would urge them to draft a non-gay player. If so, the league could have had some sort of lawsuit on their hands for discrimination. Either way this investigation into what happened is far from over and now it might be time for Balzer to take off his tinfoil hat.