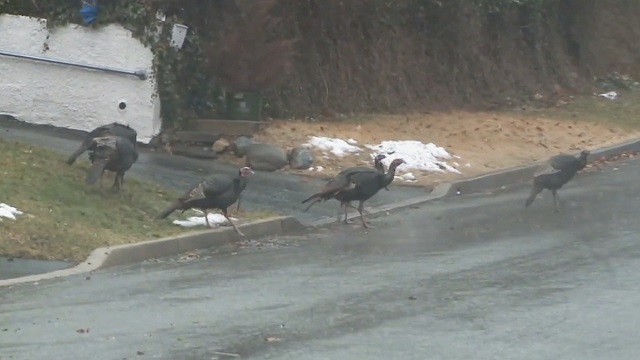 In New Jersey, a community is looking for answers after residents claim they’ve been victims of wild turkey attacks.

Residents in the town of Teaneck held a meeting with New Jersey Fish and Wildlife on Tuesday to discuss their concerns about temperamental birds that have terrorized the town.

Courtney Lopchinsky is a town resident who says she’s been a victim of the turkey attacks. Lopchinsky claimed she at the dinner table with her children when a wild turkey flew through a window and landed on her table. Lopchinsky said:

Turkeys have been roaming the streets around the Lopchinsky house and neighbors even captured video of a turkey chasing her.

At the meeting on Tuesday, the New Jersey Fish and Wildlife told community members that they should:

“humanely harass them, spray them with a hose, bang pots and pans, use a dog on a leash to kind of chase them away.”

She also made clear that only people working for the state are allowed to physically touch the birds.

Not all is lost for residents because Animal Control Officer Vincent Ascolese said he is going to give away air horns to the public to help keep the birds away.

The town of Teaneck is not the nly New jersey community who has come face to face with the flying foes. Back in February, a Hillsdale postmaster called 911 when one of his carriers was held hostage in a mail truck by turkeys. One East Brunswick man also claimed a family of wild turkeys tried to enter through his back door.

The New Jersey Fish and Wildlife said that this year they’ve received at least 2o calls for turkey related incidents. In New Jersey, turkeys are a protected species so residents are only encouraged to harass them, but never harm them.

Lopchinsky said that she’s still traumatized by the incident.

“I hear it sometimes at night, that loud noise of the turkey breaking through the glass. It’s just one of those things where, when you’re in it, at the time, it’s so scary. It happens so suddenly, that it’s just one of those moments where: Is this the time when life is going to change in a moment?”

I’m not quite sure what’s in the water down in the land of Chris Christie, but it surely isn’t sanity.

The Week in Review: July 1st-8th