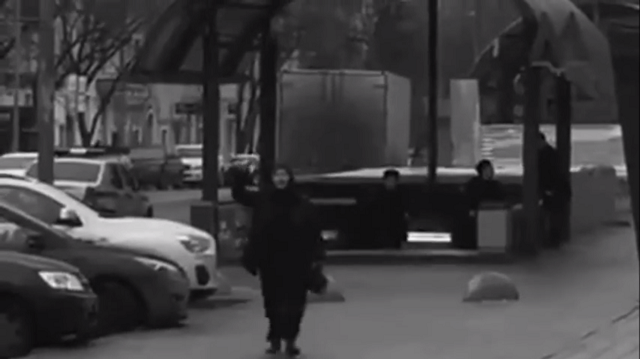 A Russian nanny in Moscow was arrested on the suspicion that she murdered a child after she was seen carrying a decapitated head through the streets.

The woman is believed to the nanny of the victim and apparently killed the child before she set fire to the parents’ apartment.

The women was first spotted walking near a metro station with a severed head in her hands.

The video published on Youtube shows the woman walking around by the metro station as she makes a very public scene with the severed head.

The suspect was placed in the hands of psychiatric care to determine whether or not she can fully understand her actions and the crime she just committed.
A full scale criminal investigation has been launched after the discovery of a young child’s remains in a charred north-western Moscow flat.

“[a]ccording to preliminary information, the child’s nanny, a citizen of one of the Central Asian states born in 1977, waited for the parents and elder child to leave the flat and then, for reasons not established, murdered the infant, set fire to the flat and left the scene,” it added in the statement.

The suspect was later identified by Russian media as Gyulchekhra Bobokulova.

Life News reported that a policeman asked the woman for her identity documents outside a metro station before the woman pulled the head out of a bag and threatened to blow herself up. Police later found no traces of any explosives on the individual.

One video posted shows the black-clad woman outside a metro station as she shouts  “Allahu Akbar” which means “God is Great). The woman later chanted “I am a terrorist” and “I am your death”.

One Russian journalist witnessed the incident and said:

“I was on my way to the metro station from home. She was standing near the metro entrance and caught my attention because she was screaming Allahu Akbar.I saw that she had a bloodied head in her arms but I thought it was not real. People in the crowd said it was real.”

In 2010, a bombing occurred in a Moscow metro station and the blast killed at least 38 people. One year later, another bomb attack at Domodedovo airport killed 37 people.

[quads id=”3″]
An Islamist group from part of Northern Russian have been believed to be behind most of the attacks, though the woman’s connection to these groups are unknown.
Uzebekistan, where the woman is from has long supplied migrant labor to the Russian capital.Image via screengrab