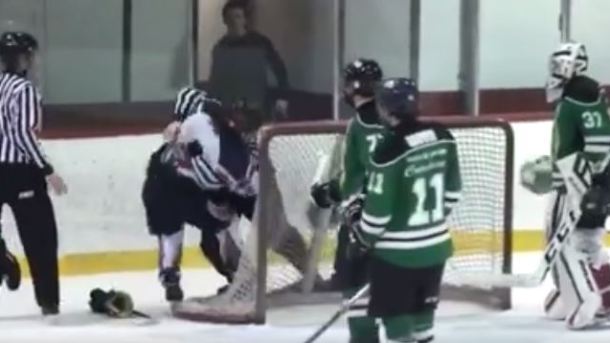 Not long ago Dennis Wideman, a hockey player for the Calgary Flames got slapped with a 20-game suspension for his “physical abuse of an official.”

A junior hockey league game in Sherbrooke, Quebec went beyond Wideman’s behavior towards an  official.

Olivier Marcotte, a player on one of the team was handcuffed after attempting to wrestle a linemans and then proceed to spit on the official.

Forunately for Marcotte, he was not arrested or charged but his actions are just disgusting as you can see by the video below.

No words…… >:( 😮 >:( Junior AA player gets handcuffed and arrested by the Police during game after wresting and spitting on linesman… (Full Video)(via: TVASports)

Posted by HockeyWebCast on Wednesday, February 24, 2016