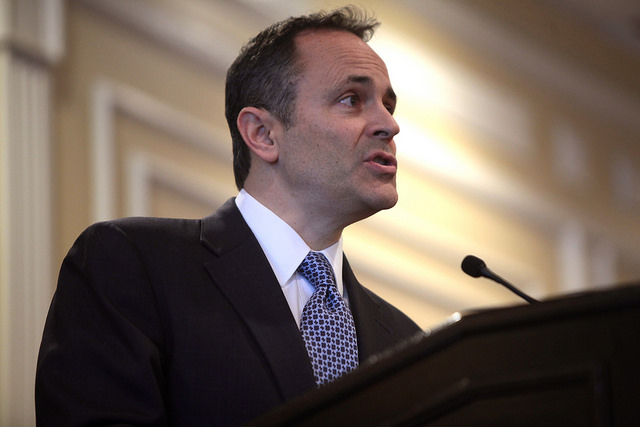 Kentucky’s new Gov. Matt Bevin (R) opted to bypass the legislative process this spring when he unilaterally cut $41 million in funding for college education. Now the governor has been slapped with a lawsuit after he played the role of judge, jury, and executioner.

The States Attorney General Andy Beshear (D), son of former Kentucky governor Steve Beshear is suing Bevin for violating state law and governors authority. The suit came after Bevin slashed college education budgets by 4.5 percent in March and Andy Beshear told him he had one week to rescind his cuts or face a lawsuit.

Gov. Bevin chose not to reverse the budget cuts and now Beshear is taking his promise to court.

“No governor has the power to do what this governor has done. Under (the governor’s) view, a budget is merely a suggestion and the legislature is merely an advisory body.”

Beshear is seeking an injunction to restore college funding to lessen the damage done to Kentucky’s higher education and on Thursday, Beshear will state his case.

Bevin has already said that the cuts were necessary and plans to keep fighting:

“As best we can make sense of his rambling press conference, we strongly disagree with the Attorney General and will respond as necessary in court”

Bevin also went stuck his hand in the gutter and claimed that Beshear was only suing him to cover up for corruption and personnel violations in the attorney generals office.

“I would sue any governor who did this, whether Democratic or Republican,” he said in the Monday press conference.

Bevin, a Tea Party favorite rose to prominence after he lost by a landslide Senate election to Mitch McConnell in 2014. Now Bevin has become the poster child after he told the EPA to “pound sand” and said the minimum wage was unconstitutional. Bevin also sided with Kim Davis after she refused to sign gay marriage licenses.

Bevin is just the latest of governor being sued over education funding. In January, school officials and parents sued the state of Connecticut. Michigan’s Gov. Rick Synder has also been hit with a suit after the states emergency manager law left school financial decisions up to unelected state bureaucrats.

For a nation that has a history of the worlds greatest college systems, Bevin’s decision to cut funding will leave an even darker clouds over an already gloomy term in office.