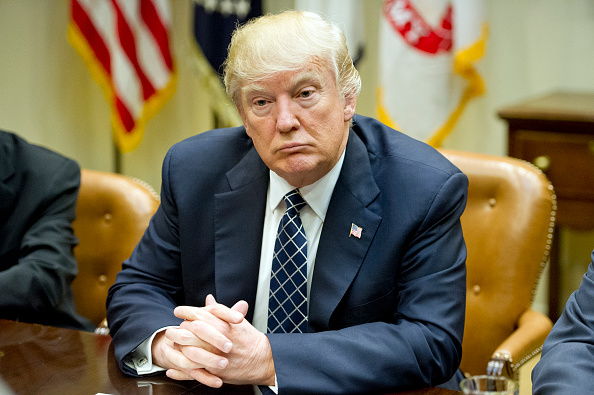 Two days of hearings and more to cover than anyone can do without a 24 hour “news” team, but we here at As The Donald Turns will do our best to sift through the critical moments as we bring you, “Hearing Problems.”

• We cut straight to the chase with Jim Comey. Not since the Iran Contra Hearings in 1987 has congressional testimony been so eagerly anticipated. Of course Comey’s opening statement was released yesterday at his behest so that the Senators could be more prepared with questions. After a brief opening statement, we were off and running.

• He made it clear that he was concerned and disturbed by Donald’s questions and conversation topics at the first meeting on January 6th, so he decided he needed to make notes after every meeting. There were nine contacts between the two….NINE. Bearing in mind that it is inappropriate for the president, any president, to be meeting one-on-one with the head of the FBI, nine contacts, (phone and in person) in five months is stunning. Knowing that this particular FBI director was heading an investigation involving Trump’s staff/Russia, it is off the charts!

• The former FBI director made it clear that the aftermath of his firing included Trump and his people lying about him and smearing his name. Here is why that matters. The New York Times has been reporting on conversations between Trump and Comey. Trump has been calling it fake news. It turns out the reports were 100% spot on, according to Comey’s notes. It’s because Comey was the leaker. After he got fired, he sent a copy of his notes to an old law school friend. When Trump’s army went after Comey, those notes were leaked, with his blessing, to the Times. Trump had his thoughts given to Lester Holt and to Fox News. Comey had hundreds of pages of notes taken immediately after the meetings, that went to the media and we got a windfall of REAL NEWS.

• He also made it clear he turned over all of his notes to special counsel Robert Mueller. That matters because it moves the investigation from something that was wholly about the Trump campaign/Russia in 2016 to Donald’s activities as president in 2017.

• Comey made it clear that part of the reason he felt the need to protect himself was because of the now infamous February 14th meeting. Trump specifically asked Attorney General Jeff Sessions, Chief of Staff Reince Preibus, Son-in-Law/majordomo Jared Kushner to leave the Oval Office so that he could speak alone with Director Comey and thus came the Michael Flynn conversation that is at the heart of the obstruction of justice question. What compelling reason, other than to have plausible deniability, would Trump ever have to ask everyone to leave the room? He said he took Trump’s request to let Michael Flynn go as a directive, which he of course did not do.

• He also addressed that Donald tweeted about potential tapes of Oval Office conversations. “Lordy, I hope there are tapes.” Comey made it clear he had no qualms about anything that would be on the recordings, but clearly Donald should be concerned.

• The taping became a question at the press gaggle Thursday and the administration embarrassed itself. Because of the hearings and Donald having other meetings there was no formal briefing. In the gaggle, Sarah Huckabee Sanders was asked if there was a recording system in the White House. She said had no idea. For the love of all that is hallowed, answer the dang question! This is four weeks of the media asking Huckabee Sanders and Sparkle Pony. It is a yes or no answer. Huckabee Sanders mocked the question. She was asked if she would find out and she chuckled and said, “Sure, I’ll try to look under the couches.” Look, you don’t get to be so cavalier about something that will inherently prove one person right and the other wrong. What has become clear as they get asked questions about things specific to Donald is that the two primary spokespeople for the White House, have near zero access to the president himself. That alone is an alarming trend. All they had today was firing back at Comey by contending that the president is not a liar. If that is your headline of the day from the press team, you have some real problems.

• We say this with all possible compassion, but can someone check in on Senator John McCain? To say he looked and acted like the doddering old Muppets in the balcony would be an understatement. His questions were rambling and incoherent. He asked about why the investigation into Hillary and her emails ended but the investigation into Donald and the Russians has not. HUH? Comey told him, one was completed and one was not. McCain was still not getting it. He asked why the Trump/Russia investigation was not completed. Senator, you may not have noticed this but Comey got fired, so this is the wrong guy to ask. Hey, Arizona, we assume you saw this. It’s time to bring your Senator back home for a long quiet nap.

• Donald himself was quiet today, but Donald Jr. was not.
@DonaldJTrumpJr 5h5 hours ago
“Flynn stuff is BS in context 2 guys talking about a guy they both know well. I hear “I hope nothing happens but you have to do your job”

Yeah just two guys shooting the breeze, about someone who was secretly working for other governments while being in on classified meetings. No biggie.

• To make Donald’s case further, and to make it worse, his personal attorney, Marc Kasowitz, held a press conference where he misrepresented much of what Comey said, but he also accused Comey of leaking privileged information. He also said Donald never demanded loyalty and the conversation about Flynn was a lie. Take a step back. These are not run of the mill rebuttals. First of all, there is no constitutional attorney who is going to say Comey’s personal notes written in the back of his SUV are protected material, short of classified info. But beyond that, Comey took an oath before his testimony Thursday. Kasowitz is not accusing him of lying. He is accusing him of committing perjury before Congress. Words matter counselor. Just ask Donald.

At the end of the day, it is advisable to see where we are. A Quinnipiac poll released Tuesday has Donald at a 34% approval rating. His legislative agenda is stuck in the mud because of the investigation and his polling. A dysfunctional president has devolved into a dysfunctional presidency. We would also do well to remember that it took the FBI and the special investigator(s) more than a year of work before they had conclusions on Richard Nixon and Watergate. They didn’t even start for a year until after the WAPO had it first reports of wrongdoing. If crazy rides give you a weak stomach, better load up on the motion sickness pills. This is going to be a long road with lots of potholes.