This has been anything but a normal first six months of a presidency, but clearly things are moving at a rapid pace, and thus we bring you the latest installment of As The Donald Turns, “Busy, Busy, Busy.”

• Donald has had a busy week distorting facts and telling tall tales. He started Monday with a gathering of people who do not like the Affordable Care Act and he gave a speech about how Obamacare has been a drain on the country for 17 years. Clearly, we are in some Mr. Peabody and Sherman Way Back Machine, since 17 years ago, George W. Bush was president, and Barack Obama was a state senator in Illinois. 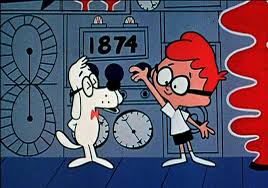 Donald does not let facts get in the way of what he wants to say though, and he has been busy with his phone.

@realDonaldTrump Jul 24
“Republicans have a last chance to do the right thing on Repeal & Replace after years of talking & campaigning on it.”

We are not sure why he thinks it is the “last chance” but certainly it is what the GOP has lived off for years, repealing and replacing Obamacare, and now that they have the power to do it, all they do is get busy work with no significant legislation on any topic actually passing

• Since he was busy taking photo ops in the West Wing, it was a good time to do it with the White House interns. The only thing missing was Sarah Huckabee Sanders trying to tell the media it was also “Diversity Week” at the White House.

• After all those warm, fuzzies, it was time to get busy and make a campaign speech….you know…the kind every president makes six months into their first term. Who better to give that stump speech to than a bunch of 10-13 year old Boy Scouts who will still not be old enough to vote for you in three years? Donald went to the national Boy Scout Jamboree in West Virginia to talk about things every Boy Scout is eager to talk about; the healthcare bill, the unfair media, how much he won the election by, how he did in Michigan and Pennsylvania. I mean, Donald had them riveted. He said, just like during the 2016 campaign, that the fake media would never admit how big the crowd was, as if all these pre-teens got tickets and willingly drove themselves to a presidential campaign rally.

He even jokingly threatened to fire Health and Human Services Secretary Tom Price if he did not get the needed votes to repeal Obamacare on Tuesday. Price, who was there, chuckled at the thought. And then a brave young boy who was clearly better versed in the working formation of the federal government ran up on stage and told Donald that it was the not the duty of the HHS Secretary to wrangle Senate votes. Okay, that last part didn’t happen, but it could have. We hold out hope that the youth of this country is taking Government classes beyond Donald’s comprehension.

Donald did tell a really long story about how he hangs out with the best people and has a history of going to parties on yachts in New York, because somehow, he wove that into a tale about momentum, and that was his message. That and loyalty. He said he needed more people with loyalty, apparently hoping one of these 13 year old kids could clear Senate confirmation hearings to replace Attorney General Jefferson Beauregard Sessions.

• Yes, Attorney General Sessions is still on the chopping block. Monday Donald referred to Sessions in a tweet about Hillary.

@realDonaldTrump
“So why aren’t the Committees and investigators, and of course our beleaguered A.G., looking into Crooked Hillary’s crimes & Russia relations?”

So instead of asking his attorney general something directly he prefers to throw him under the bus in a tweet, calling him beleaguered. That was the easy part for Sessions. Tuesday, Donald went at him again on Twitter.

At his joint press conference with the Lebanese prime minister Tuesday, Donald was asked about the future of Sessions, and the only nod he could give was, “Time will tell.”

So, clearly, this insistence on loyalty only goes one way for Donald. He has taken the first US Senator to endorse him during the campaign and thrown him to the wolves because he followed federal government protocol and recused himself from the Russia investigation. Sessions should stay and make Donald fire him and watch a constitutional crisis unfold for hoots and giggles.

• New White House Communications Director Anthony Scaramucci got busy on this in a hurry.

He said the tension between Donald and Sessions is clear. Appearing on the Hugh Hewitt radio show, Scaramucci said,

“Probably correct that President Trump wants Attorney General Jeff Sessions gone.” He followed that up by saying he did not want to speak for the president. Can we get that Boy Scout back here to also teach “Mooch” about how the White House communications team does, in fact, speak for the president?
Scaramucci went on to say that Donald wanted loyalty out of the position and probably needed, “a hockey goalie,” style of AG to protect him. Man, this Boy Scout with the good Government class grades is going to be busy at this rate.

• With that it was time for Congress to get busy and vote to debate a healthcare bill that does not technically exist. The Senate voted 50-50 (2 Republicans voted no), to adopt the procedure that will bring back the bill that did not have enough votes to pass two weeks and allow debate and amendments. So now the bill will become a legislative Christmas tree, with Senators hanging amendments on it to get make it palatable to their state. John McCain returned from post-op recovery in Arizona and immediately voted yes, and then took to the floor to lecture the entire body. He said the bill, as is, has no chance to pass and that the GOP should include Democrats in the development.

There is much busy work to come in the weeks ahead.