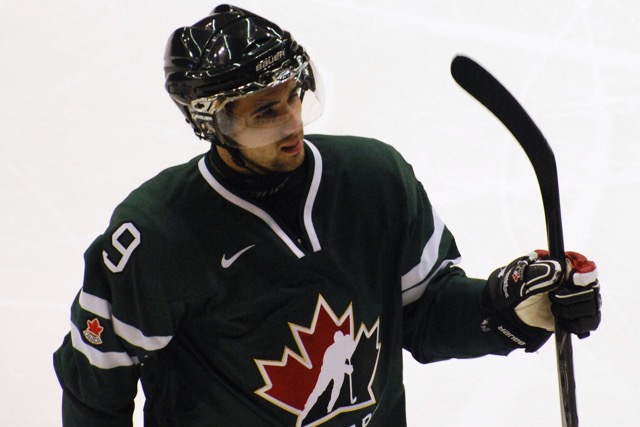 With the worst record in the NHL, the Toronto Maple Leafs got knocked down yet again after forward Nazem Kadri was suspended for the remainder of the NHL season.

Kadri originally had a four game suspension handed down after he cross-checked Luke Glendening in the second period of a contest against the Detroit Red Wings.

Kadri immediately insisted that he didn’t intend to head target Glendening and during gameplay was punished with a minor penalty.

Kadri has told reporters after the game that:

“My cross-check kind of rode up on his shoulder a little bit and, yeah, that’s a penalty for sure”

Because of the collective bargaining agreement, Kadri is considered to be a repeat offender and has to forfeit $200,000.

This is third violation of league polices by Kadri in his NHL career so the penalty is much stiffer. Back in 2013 he was suspended after running over former Minnesota Wild goalie Nikolas Backstrom. Then last April he got a four game suspension after a hit to the  head of Matt Fraser.

Kadri latest incident with Glendening is the second time in a mere matter of days the forward has been disciplined by the league. The 25-year-old had to pay a $5,009 fine on Friday for diving diving/embellishment.

Kadri has continued to defend his reputation as a diver saying:

“I’m not really too concerned about it to be honest. It’s not going to change the way I play.”

Kadri is currently leads the Toronto Maple Leafs with 45 points in 76 games but also has accrued 73 penalty minutes, which is the most by a Maple Leafs player this year.

For the Toronto Maple Leafs, this season has become a disaster enroute to a 28-39 record as they sit in the cellar of the Eastern Conference.