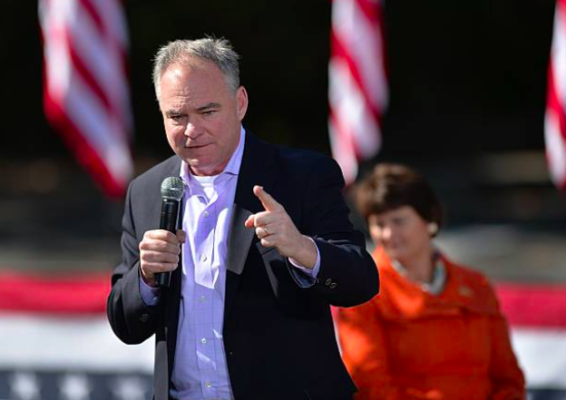 As Election Day 2018 approaches, this column is focusing on the Latino vote in a three-part series. Last week offered a general overview of the situation facing the Democratic Party. This week’s installment will focus on the 2016 election as a prelude to 2018. Next week will focus on the media angle regarding this topic.
*
In 2016, Tim Kaine was Hillary Clinton’s pick as her vice-presidential running mate. Kaine spoke fluent, if measured, Spanish. He volunteered with the Jesuits in Honduras in the very early 1980s. He went to a Jesuit high school and was inspired to work with Jesuit missionaries. When Hillary picked Kaine, the Virginia Senator was supposed to deliver three states: Virginia, North Carolina and Florida. (Yes, North Carolina had become a lot more multi-ethnic due to an infusion of labor from various industries.)
Naturally, a big part of Kaine’s presence on the ticket — in pursuit of those three electoral prizes — was his ability to speak Spanish on television. You would think that Kaine would have given all-Spanish speeches on numerous occasions.
The actual number of times he gave an all-Spanish speech at an organized campaign rally: one.
He also gave a non-stump-speech address for a mere five minutes at a Miami church group.
Not using Kaine’s linguistic diversity more was one of many failures from the Clinton campaign in 2016, but it also has to be said that whatever Kaine did in North Carolina and Florida was obviously ineffective.
While Clinton roughly matched Barack Obama’s share of the Latino vote from 2012, getting about 67 percent of the Latino vote in Florida, Trump reached the 30-percent mark.
Given the reality that Donald Trump injected more incendiary rhetoric into the campaign, to the extent that Hillary and the Democrats were hopeful for a push above 70 percent of the Latino vote and a corresponding downward effect which would drag the Trump share of the Florida Latino vote under 25 percent, Hillary didn’t get what she wanted.
That doesn’t even account for a lack of a surge in turnout. The pool of Latino voters in Florida (as with the nation at large) increased, but so did the numbers of eligible Latino voters who didn’t cast a ballot. Whites and blacks voted at a much higher rate, minimizing the effect of the (roughly) 2-to-1 margin for Clinton among Latinos in Florida.
The percentage of actual Latino votes in Florida wasn’t bad, but it wasn’t great under the circumstances. Yet, that was the secondary problem for the Clinton campaign in 2016. The main problem was the number of voters who stayed home. What applied to Latinos in Florida applied more generally to blacks in the Midwestern states Trump won by narrow margins. Blacks who had voted for Obama in 2008 and 2012 in Wisconsin and Michigan and Pennsylvania didn’t come out in force.
I digress.
If we are focusing on the Latino vote, Kaine didn’t get enough voters to the polls in Florida or North Carolina.
Let’s now get to the heart of the matter for the Democrats in an attempt to conclude this installment of our Latino vote series: Turnout was close to 50 percent for Latinos in 2016. Rounded to the nearest whole number: 48 percent.
Imagine, then, if Democrats could get 65 percent turnout among Latinos in 2018 or any other election, very much including 2020. The party would still fail to get roughly 1 out of every 3 Latino voters to the polls, but compared to the current situation, that would be a banquet table of riches. A 65-percent turnout number would simultaneously make Latinos the foremost minority voting group and depress the share (as a percentage of the vote) of white voters in elections. That is the demographics-as-destiny path the Democrats need to win present-day elections in the United States.
Next week, this column will look at how the media landscape feeds into voter apathy, the exact opposite of what the Democrats are looking for.