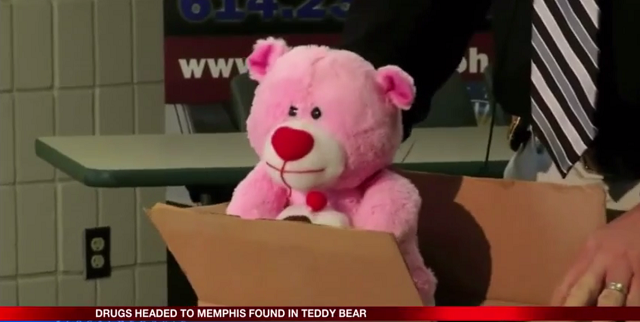 In Ohio, police foiled a plan in which a man attempted to ship a teddy bear filled with drugs to Memphis.

The clerk who tipped off police about their suspicion said that:

Upon a closer examination by the Whitehall, Ohio police, they found that the cuddly, pink teddy bear had more than just stuffing inside of it. The bear was was filled with liquid codeine, a medication you can only get with a prescription.

“We have no idea where it came from. This bottle was not labeled for prescription, it wasn’t issued by a doctor. It’s not something that somebody took from their mother,”

Police received a call from the unidentified clerk at nearby shipping business, when she thought that it was strange that a man came in asking to send the toy to Memphis, Tennessee.

“[the ] [woman] noticed it was heavy and it seemed odd to her. Just as things went along, he was giving bad information for his address. She was just very suspicious,”

After the clerk ripped open the bear, she found a small pint size bottle filled with codeine. Police have said drugs such as codeine are used by people to mix with Sprite to create what is known as “purple drank” or “lean”, which can produce a toxic high for users.

“It’s used illegally as a party drug and something that kids are doing.”

The Whitehall police say the suspect is unknown at this point because the information he provided to the delivery service was false. Police asked local delivery services to be weary of any suspicious packages that are being sent out and to contact the authorities.