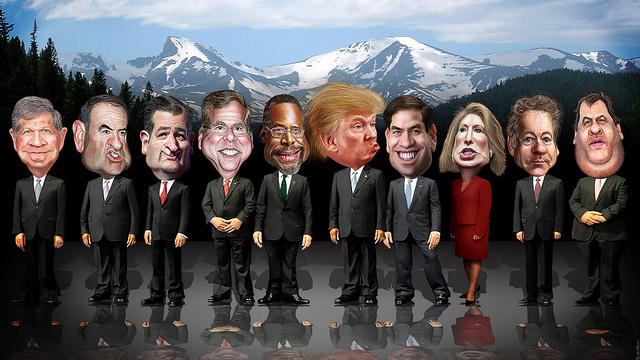 The Iowa Caucuses are just three weeks away and the wasblood boiling on Thursday night as the  Republican race gets closer and attacks get meaner.

Much like in 2008 when Barack Obama was hammered by Donald Trump for “not being born in the United States”, this time Trump turned his sights to Ted Cruz. Cruz was notoriously born in Canada by his American mother but was granted “birth right citizenship.”

But Cruz didn’t take the comments lightly as he called out The Donald. Cruz said:

“Back in September, my friend Donald said he had his lawyers look at this from every which way and there was no issue there [and] [now] [Trump] is dismayed that his poll numbers are falling in Iowa.”

2. Cruz And His Goldman Sachs Loan

After a New York Times article called out Ted Cruz for not reporting his Goldman Sachs loan on a federal form, the Republican hopeful fired back.

And after bashing the media and Democratic candidate Hillary Clinton for it, Cruz finally took responsibility and admitted it was a paperwork mistake.

Cruz also spun Trump’s comments about evangelicals not coming from Cuba by saying:

“not a lot of conservatives come out of Manhattan”

Essentially Cruz was attacking Trump for having the decency to allow people a choice with their own decisions. Free from Religious opinion.

Remember when Rob Ryan threw the whole kitchen sink at Tom Brady? If not, Marco Rubio did it to Ted Cruz during the debate.

Rubio took another shot at Cruz by calling it:

However, Rubio couldn’t figure out that maybe Cruz was trying to bridge party lines and not be one-sided.

Cruz played along and was glad Rubio decided to:

“[dump] [his] research folder on the debate stage”

Rubio and Chris Christie lock heads in a heated debate over the State of New Jersey.

“I like Chris Christie but we can not afford to have a president of the United States that supports common core,”

It seemed however Christie had last word as he fired back at Rubio saying:

“I like Marco too. And, two years ago he called me a conservative reformer that New Jersey needed. That was before he was running against me. Now that he is he’s changed his tune.”

The debates are only going to get better and the attacks are about to get even worse as candidates struggle to find ground through tv attack ads and dig up bad history of competitors. It surely will make for an interesting three weeks.