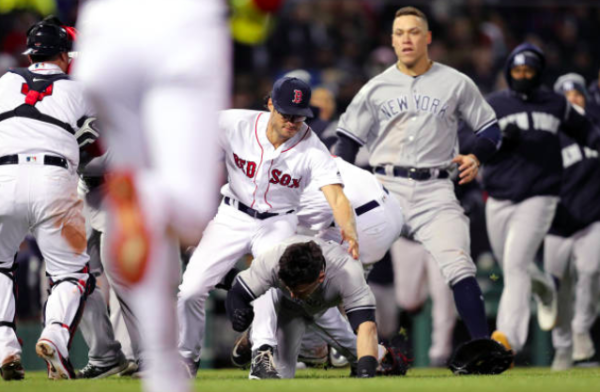 Wednesday night, as every sports fan knows, it was essentially an odd mix of the French Revolution and Armageddon in the baseball world. First, as an amateur-quazi-sports media member, I want to say thank you to every baseball player whose testosterone-rage levels are out of control, resulting in fights. It really gives me something exciting to write and talk about. Without you, I’d be forced to break down the Knicks firing of Jeff Hornacek and bore myself to death, so thank you.

Wednesday night, Tyler Austin slid into Brock Holt to break up a double play, and Brock Holt and the Red Sox acted like he knocked up his girlfriend, as if breaking up a double play isn’t standard in baseball. Of course, thanks to baseball’s mafia-esque unwritten rules, this lead to Sox reliever Joe Kelly to throw at Tyler Austin, resulting in a bench clearing brawl. Only in the worlds of baseball and global politics do fights escalate after they’re seemingly over. In any other sport, this whole fight would be over, but now the Yankees and Red Sox are embroiled in a Cold War.

Boston is completely indefensible in this whole debacle. Tyler Austin’s slide wouldn’t even have been a story in either Boston or New York if Brock Holt didn’t cry over spilled milk. Seriously, there’s no chance this would happen in any other sport, which makes baseball good and bad at the same time. If you really feel that reacting to a routine slide at second base warrants throwing a 98 mph fast ball towards the guy’s head, then you’d probably be willing to fight over anything. That’s like trying to start a fight if somebody accidentally bumps into you at a bar. Don’t become fight guy.

Baseball fights and PEDs are like drugs and sex scandals; we can’t have them, but also need them at the same time.

Bench clearing brawls in baseball are like PEDs; we can’t allow them to continue to happen, but at the same time, we need them. Think about it, how much more entertaining was the MLB when pitchers and hitters were juiced up? I personally loved the steroid era–it made for entertaining baseball. Similarly, we can’t condone fighting in the middle of games, but it takes a mediocre game and turns it into a must-see. The truth about baseball is that it’s the best fighting sport. The NHL as a sport in general fights too much for it to be special, football fights are all awful because none of the players are macho enough to take off their helmets and fight (besides the games are good enough anyway), and NBA fights rarely turn into bench clearing brawls, except for a few notable classics. In addition, there’s fewer people on each bench for a fight to be as much fun as a baseball fight. But in baseball, the storm is perfect. Regular season baseball is slow, at times boring to death. As a writer and talker, I don’t like talking about regular season baseball too often, because there’s usually not much compelling conversation I can make out of it. But fights and PEDs are the perfect cure. If I break down Noah Syndergaard’s leg kick, nobody cares, but a PED scandal or a bench clearing brawl? Let’s go! That’s ratings and page views gold. In fact, I hope there’s another PED era in baseball, and that more fights break out this year.

Like drugs, leaked nudes, and sex scandals, we need it. How much less entertaining would American politics be if Anthony Weiner never got caught sending a picture of his junk, if the Monica Lewinsky scandal never happened, or if the Mayor of Nashville never banged her security detail in Greece? Or if you never heard about the most recent sex scandal teacher, or if you never heard stories of the ’86 Mets or Lawrence Taylor getting jacked on cocaine? The list can go on for years. We can’t tolerate any of these aforementioned details from an ethical perspective, but I’m willing to admit that I love these scandals and my life would be less entertaining without them.

You know what else nobody ever talks about? Is that what makes baseball fights so great is that baseball players can’t fight. They’re all awful at it. Just think of it this way, how often do you hear about baseball players throwing punches and missing? The punching average in baseball fights has to be under .500. Just think about it, if you’ve ever been in a fight in your life, how often have you ever thrown a punch and flat out missed? Not very often. High school kids on World Star can fight better than most baseball players. What make baseball fights complete, is the one coach that feels the need to get involved. Back in 2004, it was Don Zimmer, who I still haven’t stopped making fun of. I like to call him Tumblin’ Don.

In a weird way, baseball fights spark a sense of passionate sports nationalism, better than anything else in sports. As a Mets fan, if you were to ask me about my happiest moment as a fan, it was either when the Mets beat the Dodgers in Game 5 of the NLDS or when they clinched a playoff spot that season. But what’s made me the proudest to be a Mets fan, and given me a die for my team mentality, it was during fights. Most notably, either the fight between Jose Reyes and Miguel Olive back during the ’07 collapse season. This one hits home for me because I was at that game. Benches cleared and even players I legitimately didn’t like (most notably Jorge Sosa and Guillermo Mota because they sucked) I all of a sudden loved because they were on my side. Hell, if security weren’t there I would’ve ran out onto the field and fought the Marlins myself that day. That’s how high my sports nationalism levels were that day. Literally, the next day, all of these feelings dropped into a depression after Tom Glavine gave up seven runs in the first inning.

The other example was when Chase Utley broke Ruben Tejada’s leg on a dirty slide during the NLDS. I was watching the game at home and I wanted to jump through the TV and throw hands with Chase Utley myself. I’ve never liked Utley before that, but ever since then, I’ve been convinced that Chase Utley is the devil who walks among us. I hate him more than any other athlete or coach in sports. It may be kind of embarrassing that I have such passionate hatred for a guy who doesn’t even know I exist, but I’m willing to wear that somewhat pathetic fan-boyishness label on my sleeve.

Anyway, I hope there’s another fight tonight, and while I’m at it, more sex scandals, PED use, and drug stories. Happy scandals everybody!