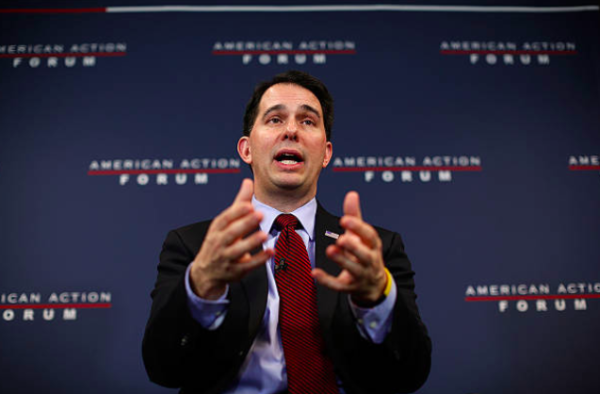 I knew that Judge Michael Screnock was doomed to fail last August. I was at work when I got a call from the Republican Party of Wisconsin, asking for donations and calling to inform me of all of the various races coming up in the next year. Me, being a political nerd and researching the candidates as soon as they file, told the young man on the other side of the phone, “I already plan on donating and supporting Judge Michael Screnock next year,” to which he confusedly said “Who?”

Then again, on April 3rd (Election Day), I got another call from the GOP. I assumed it would be a robocall encouraging me to get out the vote. Instead, it was someone from the RNC calling to ask me about which news sources I find trustworthy, because when the Republicans are facing massive losses nationwide, it is of the utmost importance to make sure that Fox News’ approval ratings are high.

For the first time in years, the Democrats in the state of Wisconsin picked up a major electoral victory from the Republicans who have had a stranglehold on the ballot box in the Scott Walker era. Screnock’s loss wasn’t surprising; everybody knew that there would be a lot of energy and enthusiasm coming from the left, and that this would be the case more or less across the country. Meanwhile, many people on the right have become apathetic after underwhelming results from the national party despite holding every branch of government. This, coupled with a poorly-run campaign on Screnock’s behalf and complacency on the part of the state GOP, was a recipe for disaster for conservatives in Wisconsin.

The enthusiasm gap is very real. The Trump effect is very real. The Blue Wave is very real. And the biggest indication of this isn’t in congressional special elections like with Conor Lamb in Pennsylvania; it is in the most local of races, such as state legislature seats or this Supreme Court election. And while it is easy to dismiss this under the premise that the party in power always experiences losses in the midterms, this feels different. Trump is way more polarizing than those previous presidents–he hasn’t just energized a lot of people on the left, but he’s also alienated a lot of people on the right. Whether it is fair or not, every single race on the ballot this year is going to be a referendum on the president and every candidate with an (R) by their name is going to be held accountable for his actions (and to an extent, the inaction of the Republican-controlled Congress).

But the thing to remember for conservatives out there, is that while a blue wave is inevitable, it is not invincible. It will only be as strong as you let it be. If the GOP continues to sit on its hands being complacent while focusing on petty issues like “fake news” and Hillary Clinton, it will deservingly see every single gain wiped away. However, if they can focus on a clear agenda–not tactics, but an actual bold agenda–it is possible to resist the #Resistance. We cannot afford to play it safe and avoid votes that may seem to be too controversial. Conservatives elected these officials on the basis of passing bold reform, and that is how they can motivate voters to do so again. They need tangible victories to do so, and in order to accomplish this, they need break free of the tribalistic culture war and petty issues and focus on the things that actually matter.

Wisconsin has proven to be somewhat of a political microcosm for the GOP in the past few years, and a lot of the problems that I’m seeing at the state party level here I am also seeing at the national level. It has become a party more concerned with tribalistic pandering than it is with bold solutions. If it wants to survive the impeding Blue Wave, Republicans cannot afford to play it safe or water down their message to appeal to the centrists that they believe gave Trump the election–they need to Make Conservatism Great Again–real conservatism, not anti-Democrat tribalism.