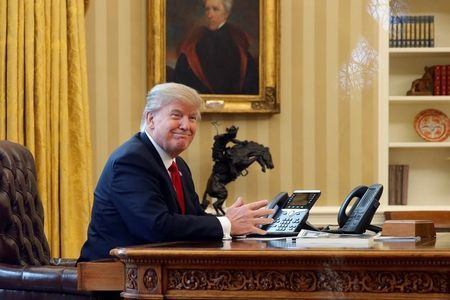 Communication, the lack of it, and lack of coherence in it, seems to be a big problem for the Trump administration. After a brief respite, As The Donald Turns is back with, “Who’s Calling?”

As The Donald Turns; Who’s Calling?

These two get along well, but if you listen to their speeches, they agree on nothing in terms of policy. Donald keeps speaking about blowing up the Iranian agreement. Macron talks about how the current agreement is a one of many steps. Donald talks about how he does not like negotiating with the European Union. France is a proud member of the EU. Much of the oddities in the communications come in the official press briefings and the unofficial press sprays in the meeting rooms.

Tuesday, Donald had to answer questions about the impending doom of the nomination of his VA Administrator, Dr. Ronny Jackson, the swap of votes to get his Secretary of State nominee Mike Pompeo out of committee, and his admiration of a certain North Korean dictator.

You did not read that last part incorrectly. Donald said North Korean dictator Kim Jong Un has been “very open” and “very honorable.” That is a far cry from “Rocket man” and “fire and fury” of a month or two ago. Obviously there has been no significant change in anything North Korea has done since the name calling.

He went before all the TV cameras for two weeks discussing his issues with Pompeo. In typical Rand Paul fashion, once he got all the attention he needed, and got a phone call from Donald, (Who’s calling?), he flipped his vote to a yes. The nomination made it out of committee and will pass the full senate later this week. Nevermind that a couple of weeks ago Pompeo appeared on a conspiracy radio show and claimed that Muslim fundamentalism was growing in small town America…you know…the parts that overwhelmingly voted for Donald.

“Democrats, especially on the Foreign Relations Committee, are really engaged in shameful political behavior,” Cotton tweeted during the week.

Naturally, in this day and age of everything stays with us forever in the digital world, it was easy to go back and remind ourselves that it was Cotton who held up an Obama nominee until she died. Cassandra Butts, a friend of President Obama’s since law school, and was Deputy White House Counsel. She died on May 26, 2016 at the age of 50 — 835 days after he nominated her to be the ambassador to the Bahamas. It was Cotton who admittedly put a hold on her nomination in retaliation for a Secret Service leak regarding a GOP congressman. Butts died and then Cotton released his hold.

And hey, here is a thought. Someone should call Sarah and have her read her boss’s twitter feed; the one where he tweeted 10 times over the weekend about the investigation, (as well as another 17 times about other issues). Yeah, no comment.

The reason, is that it keeps calls from going through the White House switchboard, and thus are not subject to monitoring by Chief of Staff John Kelly. Yes, Donald is now finding ways to go around his own chief of staff. And oh, the phone is not encrypted. Hey, it’s not like any foreign country has ever found a way to influence Donald. “Who’s calling please? Yeah, this is Donald! Where’s my burger order?”

Like we said, Donald still has a country to run. There is the TPP to trash, the Iranian Nuclear deal to trash, the Paris Climate Accord to Trash, NAFTA to trash, a wall to never build. And there is the pending meeting with the honorable rocket man, Kim Jong Un. It occurs to us that only two Americans have ever met the North Korean dictator; CIA Director Mike Pompeo…and Dennis Rodman.

We guess that makes Donald the logical next step.