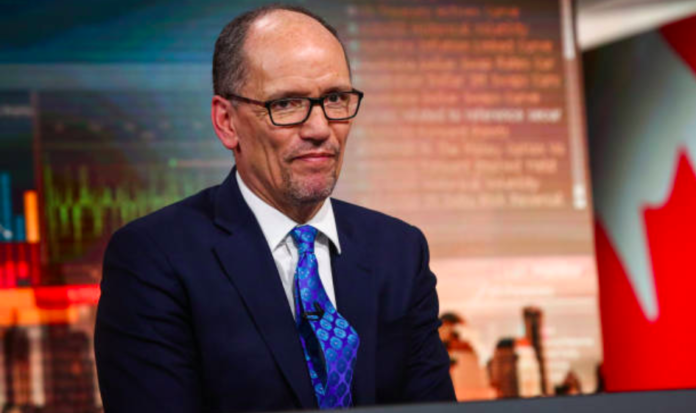 When Tom Perez and Keith Ellison competed to be the chair of the Democratic National Committee, the constant refrain from the establishment and centrist coalitions of the Democratic Party was that it didn’t really matter which person won that contest. The party’s larger vision and identity would persist. The party would continue to be committed to the right principles and ideals. A party is so much more than one leader. A large, widespread organization would mobilize to counter and defeat Donald Trump regardless of the person in the No. 1 spot at DNC headquarters.

Some of you who read this column are progressives. Others might be moderates, and some might be conservatives who are generally familiar with the Democratic Party’s infighting, but might not be aware of some especially specific internal disagreements in the party. Regardless of what you think about the above attitude expressed by establishment Democrats during the Perez-Ellison battle, this much can be acknowledged:

It is very common for politicians and their advocates to publicly speak about communal themes and broader notions, but privately hunger for individual control of large apparatuses and the power associated with it. The people need to think that a politician is mindful of their identity and concerns, but the politician has to do whatever he or she can behind the scenes to fight, conquer and win. This is how the game is played.

It is how the game has been played for a very long time.

The point is that the Democratic Party has been playing a specific kind of politics for a very long time… and that form of politics has not worked — not on a broader level if we’re being ruthlessly honest as sober evaluators of the political scene in America.

At a time in American history when a liberal CULTURAL worldview is ascendant — gay marriage becoming legal and mainstream, minorities becoming more represented in popular entertainment, Barack Obama becoming POTUS, non-traditional family arrangements proliferating, and so on — one might be inclined to think that liberal POLITICS should be dominant… but they’re not.

This goes beyond Democrat and Republican, but let’s start precisely there: Republicans control a strong majority of state legislative chambers, own most gubernatorial seats, have control of the United States House AND Senate, and the presidency. If liberal cultural ascendancies of various kinds really did translate and carry over into the political world, minority groups would show up in every election, turning out in the 70th percentile or better.

But we know this isn’t the case.

Latinos struggle to get 60 percent of their eligible voters to the polls, let alone 70 percent. The black-Latino coalition, which was supposed to be the difference maker for Hillary Clinton in the 2016 election, stayed home — enough, at any rate, to fail to provide the extra 150,000 to 200,000 votes which could have shifted the electoral math in Florida, Michigan, Pennsylvania, North Carolina, and Wisconsin.

Hillary lost Florida by roughly 113,000 votes, Pennsylvania by roughly 44,000. That’s a total of 157,000 votes in an election in which under 137,000,000 Americans cast ballots. That represented a 58-percent turnout mark, meaning 42 percent of all eligible voters in the country did not cast a ballot for a presidential election.

The Democratic Party would dominate American politics if national turnout rates consistently resided in the mid-70s or higher. Younger voters, poorer voters, minority voters — the groups that don’t vote as reliably as older, college-educated whites — could give the Democrats the demographic advantage which would make them nearly impossible to beat… but those voters rarely show up in the bulk numbers needed to turn the tide.

The very reality that the Democratic Party’s politics don’t change is a key source of that… and this past week, we saw why the Tom Perez-Keith Ellison contest was important.

We saw why it actually DOES make a difference who leads the DNC or any other major political organization.

Very simply, Perez is backtracking on the Democratic Party’s professed commitment to not accept donations from fossil fuel companies. It is extremely hard to imagine Keith Ellison having done this, regardless of your political outlook.

You might be a conservative who thinks this is not a problem as a point of merit — that’s totally fine, but it’s not what I am emphasizing.

What I am emphasizing is that within the Democratic Party, this is exactly the kind of move which — if identified and noticed by a 19-year-old who is thinking of becoming a first-time voter in the 2018 midterms, or by a 17-year-old who has been thinking about voting for the first time in the 2020 POTUS election — will turn that voter off. At the very least, while it might not turn the voter off entirely, it will certainly increase skepticism and therefore improve the odds that said young voter (a first-time voter) will not remain loyal to the Democratic Party over the longer run of time.

This is how the Democrats fail to get younger, poorer, minority voters in their column.

Who, in the Democratic Party’s messy world, is lighting a fire right now, and getting people excited? It’s a 28-year-old Latina who wants to overturn the existing corporate, neoliberal order.

Republicans, regardless of what you might personally think about them, scored enormous gains at the state legislative level and controlled Congress and governorships.

Maybe young/new/nontraditional voters will be too focused on candidates this fall and in 2020 to care about what the DNC chair does. Maybe Tom Perez’s actions on fossil fuel companies will have a minimally damaging effect on Democratic Party turnout in the upcoming elections. Narrowly viewed, that might be true.

However, if there was ever a way for Democrats to change the game in American politics — chiefly, by creating elections with 75 or 80 percent turnout instead of the 58-percent rate of 2016 — the Tom Perez path certainly is NOT the answer.