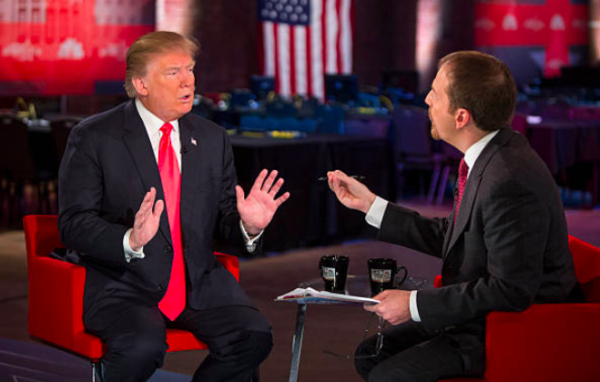 One of the most difficult and uncomfortable topics to cover in the Trump era with a level head — such that one can speak to a vast range of constituencies and make them feel that their voices are all being heard — is the identity of the American media, writ large.

References to “the media” are broad. Given that large-scale focus, it is easy to lump together all or many subgroups within the whole community of journalists and commentators. Because it is so easy to paint all journalists or journalistic outlets with the same brush, the bad journalistic outlets get thrown into the same pot with the smaller number of good ones. That in itself is a complication when discussing the identity of the American media these days… but it is not the central complication provided by the Trump presidency, and its very potent appeal to the idea that the media is the “enemy of the people.”

First things first: Of course, no president should be stoking fires of resentment to the degree — and at the level — Trump does. Of course, no president should have to refer to journalists as enemies, given the rich Nixonian flavor of that phrasing and the ugly memories it creates for a lot of people in this country. Of course — and I say this especially to my conservative friends on Twitter — even if you agree with the underlying points of Trump’s critique of the media, there is a more professional and statesmanlike way of expressing disagreement with, and disapproval of, the media’s performance.

Yet, for all the ways in which the Trump presidency has lacked the professionalism — read: organizational and operational competence — of a typical White House, this much remains: The American press, writ large, HAS done a very poor job.

To be sure, there are some outstanding individual outlets such as ProPublica and TV programs such as PBS’s Frontline, plus many more individual journalists of distinction who either freelance at multiple outlets or anchor issue-specific coverage at various publications. Ryan Devereaux, immigration reporter for The Intercept, is one of hundreds of examples. Yet, when encompassing the broader scope of media outlets (especially the cable TV “news” networks) and publications (especially the New York Times and Washington Post, plus The Atlantic and The Daily Beast), one finds a very narrow range of allowable worldviews, a comfortable home for establishment voices, and reportage which will fundamentally not challenge entrenched corporate interests.

One can make a very strong case that the quality of a lot of TV and print journalism in the year 2018 does not serve the citizenry’s best interests. One can easily furnish evidence that journalism, produced 24/7/365 on a mass scale in contemporary America, is not helping a lower-middle-class single mother of three kids in Los Angeles to live her life better or gain information she can use to improve her family’s situation.

No, this doesn’t mean journalists are our enemies… but the journalism industry (which, I hasten to say, is not the same as the working journalists on the ground) is often failing to help the American people.

From that simple point — one which MANY would agree with — Trump can make the “enemy of the people” claim and not only get away with it, but politically benefit from it. Say what else you want to about Trump, with Twitter rants and divisive, belittling language which should be beneath a President of the United States, but give him this: The insistent critique of the press is and has been his go-to move above all others, and while Trump should never call journalists the “enemy of the people,” his callout of the American media remains his most fundamentally accurate criticism. It is a severely overstated one, much more fierce and uncharitable than it needs to be, but the core accuracy — the media is doing and has done a poor job — is not going to recede.

Two tweets from Sunday very neatly illustrated why Trump’s critique of the media remains potent… which in turn enables Trump to use incendiary language and not pay a price for it.

In this tweet, one can see two tweets — the initial statement by Trump, followed by a reply from Chuck Todd, as much of an establishment Beltway journalist as there is:

This is outrageous. I’m sorry, I don’t know what else to say to someone accusing me and my colleagues of causing war. I know he’s baiting us to respond. I’m taking the bait in hopes that rational folks realize this is wrong and dangerous. https://t.co/yhS3a8wEaU

You can hate Trump all you want, but he is NOT WRONG in his central assertion that the media “can also cause war.” The media DID aid the run-up to the 2003 Iraq War. The New York Times — Judith Miller in particular — produced inaccurate and tonally sympathetic reportage which gave the Bush 43 White House, Dick Cheney in particular, the leverage needed to advance the war effort. Colin Powell’s United Nations speech was also part of the series of events made possible by mainstream media reportage, either flawed or sympathetic, if not both.

Damn straight the media can cause war. Just because Trump tweets it, Chuck Todd, that doesn’t mean it’s untrue. You, Chuck, are wrong here, and you look HORRIBLE as a result.

This is the exquisitely difficult reality of media analysis in the Trump era: No, journalists are not enemies, and it is profoundly irresponsible of Trump to stir up such visceral hatred of journalists at campaign rallies. That said, what are we to do or say when journalists — more precisely, journalistic publications (this is much more about publishers, owners and especially executive editors, such as the totally-out-to-lunch Dean Baquet of the New York Times, who is doing a legitimately terrible job of editing that once-esteemed but now mediocre paper) — perform poorly? No, they aren’t enemies, but they certainly aren’t serving the public well.

As is the case with so much else in life, we have to be able to not use Trump’s incendiary language but also not blindly become cheerleaders for the press.

The media — not just Trump — has to exhibit a lot more professionalism, but as long as the media continues to do a poor job, the pearl-clutching from the White House Press Corps will ring very hollow…

… and the potency of Trump’s best critique will only continue to grow, thereby serving his political interests.

The American media, writ large — Chuck Todd being a central example — continues to make Trump look good, and the sad thing is that Chuck doesn’t seem to realize why that is the case.