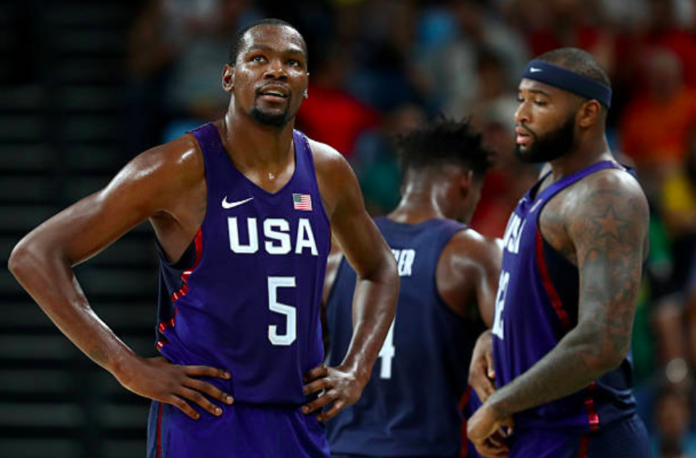 Within the past few days, NBA fans have begun losing their minds. Why? Because a large swath of sports fans, especially NBA fans on Twitter, are hypocritical, illogical, and love to make stories and scream out of thin air. Let me say that I completely understand the argument that Demarcus “Boogie” Cousins joining Golden State isn’t great for the NBA’s product, but the spasms of apoplexy and vitriol directed towards the Warriors and Cousins have been short-sighted and ridiculous. Allow me add some perspective to this story.

Why, all of a sudden, are so many sports fans hopping on the anti-NBA train? Nothing about the product of the NBA has really changed much throughout the years. Sure, the Warriors are a dynasty, but the NBA has never had any real parity throughout the league at any point since the ’80s. Moreover, the NBA’s regular season and even the first round of the playoffs are generally quite boring anyway. I’ve been on this train for a while, where have you all been? In other words, basketball isn’t football; the products just don’t compare, just look at the ratings. I’ve always said the product the the NBA puts out is vulnerable as a result of player mobility (like now) and a potential drop in the level of play (early 2000s). At the same time, there have been some positives this free agency, including the fact that we have playoff Rondo back. (Why is nobody talking about this? Seriously, playoff Rondo is “watch the tape 20 years later” level fun.) and the strong possibility of Kawhi Leonard joining forces with LeBron, which would also be fun to watch. Not saying everything that happens in the NBA is great–it never is–but what happened to any level of rational thought and a good way to weigh out the positives and negatives?

You know what else nobody is talking about? The fact that Cousins is coming off an achilles injury. There’s a significant chance he’ll never be the same player he was before the achilles injury. Keep in mind, Cousins is 6’11 and weighs 270 pounds; it’s actually rather common for a player of his size to get injured and never fully recover.

In a weird way, even though the NBA’s product isn’t great on TV, it still creates the best storylines. Think about it, no storyline can match the drama of what goes on in the NBA. Even though I like football more than basketball, there is no story in football that I would love to pass on to my kids and grandkids quite like LeBron vs Golden State, KD vs Westbrook, Cousins to the Warriors, and the overall soap opera that is the NBA. The NBA is just the Days of Our Lives, with a taller and more athletic cast. Just look at everything going on in sports right now, and look at all the 30 for 30’s that can be created. The NBA can produce the most and the best documentaries of any sport.

Another question I ask myself is why people are so mad at Golden State and Demarcus Cousins? Cousins decided to ring chase over money. Why is that so horrible? And if he pulls a Carmelo and chose money over winning, the same fans screaming to the high heavens about Cousins, criticizing him for the opposite reason and how awful it is to want money over winning. I get that you might not want Cousins to go Golden State, adding pieces to their dynasty, but he’s not obligated to keep us all happy. You think he cares what NBA Twitter thinks about him? The vitriol directed at Golden State is even more absurd. If you’re their GM, what are you supposed to do, not stack your team with as many superstars as possible giving your team the best chance to win? That’s literally his job! That’s like getting mad at Amazon and Facebook for becoming too popular as brands.

How can everybody get so mad at Adam Silver for this? Adam Silver is the commissioner, not the King of the NBA. Player mobility and the creation of dynasties that many fans view as “unfair,” which frankly, is a ridiculous notion, have nothing to do with Adam Silver. For the record, everything that happens that you don’t like isn’t unfair. If it’s legal, it’s not unfair. Save the term “unfair” for athletes who actually cheat.

I’m a Mets, Jets, and Knicks fan. I’ve gone five years without the Knicks making the playoffs, and seven years in a row without the Jets making the playoffs. I’ve been through four years of high school and three years of college without the Jets making the playoffs! I was still going through puberty the last time my football team was in the playoffs. I’ve never once complained about that being unfair, and what I go through is way worse than what some loser on Twitter with 70 followers thinks about NBA players being snakes. As a sports fan, the pain really just doesn’t compare when it doesn’t involved your own team. As a fan, I just put my head down and keep grinding, telling myself it’s just the luck of the draw. This is what most sports fans do. Sports don’t teach us the value of fairness, sports teach us the value of competition. The entire point of competing as a sports team isn’t to make competition fair, it’s to win as much as possible, just like anybody in any other profession. Nobody wants to be just average at what they do, everybody wants to (or at least should want to) be the very best at whatever it is that they do. Why should the concept be different for sports? Because it’s unfair? Life’s not fair, get over it, NBA Twitter. You shouldn’t be a sports fan if you’re so obsessed with fairness. Anyway, back to the whole blaming Adam Silver debacle, what would you have like him to do? No, this is nothing like when David Stern vetoed Chris Paul being traded to the Lakers in 2011. At the time, the NBA owned the Hornets and it was a trade; this was a free agency signing. The situations aren’t the same.

As somebody who regularly monitors sports media and where fans tend to gravitate, I would love to see polling data about favorable opinions of the NBA now vs the early 2000s. As a general rule I think that people tend to look at the past, especially in sports, through rose colored glass as a rolling highlight reel. I’m not saying I know what the results will be, but the NBA is significantly of higher quality now than it was in the early 2000s.

Anyway, I’ll conclude this article with one of my favorite quotes: “Love your family, like sports” – Colin Cowherd.