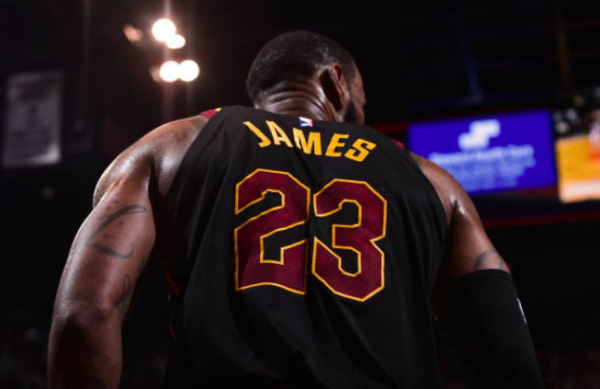 Last night, another NBA finals series came to an end in the most predictable fashion, because of course it did. As a result sports fans on Twitter have been rushing to their keyboards to make this loss about Michael Jordan or Kobe, or make this loss about anybody else in NBA history. It’s actually quite fascinating.

First of all, let me address what everybody else is blabbering on about, LeBron’s legacy. No, LeBron getting swept doesn’t affect his legacy at all. First of all, I don’t understand what difference it makes if you get swept. A win’s a win and a loss is a loss. Really, what’s the difference between losing in 5 games or getting swept? The outcome is the same. To say “well, Michael Jordan never got swept” is a classic example of sports fans reaching for the stars to prove their point. The truth is, no great in NBA history has ever had to face a team this talented with this lousy of a supporting cast. The last time an NBA player played in the finals with a supporting cast worse than this was LeBron, which was the worst supporting cast any NBA player has had in the finals… since LeBron 8 years prior. LeBron just keeps breaking his own records for crappy supporting casts. Expecting LeBron to win this series is like expecting a Fish to climb a tree.

Because I’m a big history guy (sports history or otherwise), since the 1980’s, everybody who has won a championship has had a strong supporting cast. They had number 2 guys on their teams. Jordan had Pippen, Shaq had Kobe, Magic had Kareem, Bird had McHale, Kobe had Pau Gasol. Not only did LeBron have the supporting cast of Bambi, but he also played the most dominant team in NBA history. And no, not Michael Jordan, Kobe, Duncan, Bird, Magic, or fill in your favorite all time great NBA player in history, has had to face a team nearly as dominant as this Warrior’s team. Even though he didn’t win, for the seventh year in a row, LeBron was the best player on the floor in the NBA finals. And no, it doesn’t matter that LeBron checked out of the game with 4 minutes left, the game was over at that point. It was a twenty point game with 4 minutes left, there’s no point in staying on the floor.

As sports fans, we have the tendency to make debate topics out of thin air. We can go on and on debating about the most useless topics, and this is exactly what happened last night. I can’t count the number of tweets and Facebook posts I read last night saying either Kobe or Jordan “never would’ve done this, this and that.” Well, let’s pick up an NBA history book. Michael Jordan lost in the second round in 1995 to the Orlando Magic, with an unquestionably stronger supporting cast than LeBron currently has. Would it have been better for LeBron to lose in the second round, than make the finals and lose?

For all you Kobe diehards out there, in 2005, after Shaq left, Kobe, in his prime, led the Lakers to a measly 34 wins and missed the playoffs. Why is that not detrimental to Kobe’s legacy? After all, I’d rather get to the finals and get swept than not even make the playoffs. It’s amazing to me how many basketball fans look back at some player’s careers through rose-colored glass, but focus in on lesser blemishes on LeBron’s career.

Something fascinating has happened.

You know what fascinates me? How opposite sports culture can be compared to other areas of life. Sometimes it’s strikingly similar, and other times it’s the total opposite.

Less than a week ago, Miss America, which is a beauty pageant by the way, took away the “Beauty” part of the competition, which would be like the NFL taking away the scoreboards during games. What’s amazing to me is that while the Miss America competition takes away the beauty part of the competition, which is what it was designed for, NBA fans are doing the complete opposite. NBA fans are bending over backwards to create arguments out of thin air and making everything that happened in this game about every other NBA all-time great, that doesn’t even have anything to do with the game we’re watching! One group of people wants to eliminate competition, and the other creates its own form of competition almost completely out of thin air using some of the most absurd talking points.

Elephant in the room

You know what nobody is talking about? Two very important details of the game, more important than LeBron, MJ, Durant or anything else.

Regardless of how I feel about Andre Iguodala’s game, he has the best arms in NBA history.

Name me one NBA player in history with better arms than Iggy, you can’t.

The other interesting fact is that one of the refs is named Jason Phillips, the same name as one

of the crappiest catchers in Mets history. Just because of his name, I became a little wary of the calls he was making.

Is Lebron wearing the cast the most LeBron move ever?

There’s no worse look than this. I haven’t seen anybody announce to the world that they have an injury since I was 13 years old. It’s a bad look, especially when you consider the fact that it was self-inflicted. What I’d also like to know is, who’s idea was this? If you ask me, LeBron probably thought of it himself, simply because he loves to embrace his own victimhood, and no athlete that I’ve watched would pull off this move. But couldn’t one of his “people” have given him the hint of saying that wearing a cast in a press conference makes you look soft? Just like LeBron’s legal team, I guess they didn’t stop Lebron from embarrassing himself.

Where is LeBron’s Next Destination?

First of all, I don’t want to write about this too much write now because it’ll become more of a timely topic in about a month from now, and I don’t have any information. However, I have to lay down a few key points. First, unlike 99% of professional athletes LeBron is probably not looking for a max contract. It’s safe to say he’s more concerned about winning. By this logic, he’ll probably go to Houston. Even if Chris Paul isn’t in the picture. They lost in 7 games to Golden State, and easily could’ve won had Chris Paul played game seven. Even if Chris Paul isn’t in the picture, LeBron on the Rockets could easily beat Golden State.