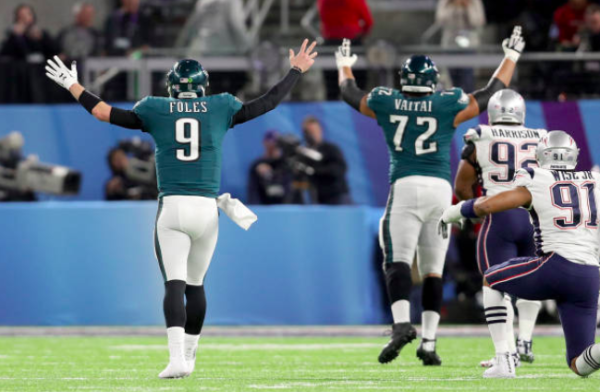 This was as perfect of a game as we (especially Pats haters) could’ve asked for.

The number one downfall for NFL fans around the nation going into the Super Bowl was the fact that one of the teams is using a back-up quarterback. Foles threw for 373 yards, 3 touchdowns, and 1 pick (which wasn’t really his fault). This was a better QB performance than we saw last season, and sure as hell better than the lousy QB performances we all were unfortunate enough to watch in the Super Bowl two years ago. Yes, Tom Brady lost the Super Bowl, and I couldn’t be happier about that. I hate New England and it feels amazing to see all those Massholes’ souls melting like the wicked witch of the West. I also love watching all these disenchanted Pats fans rioting at UMass. Pray for Massholes.

In addition, you know how many punts were in this game? 1! A single punt the entire game! I’m pretty sure everybody reading this would agree that the worst part of football games are punts. Any football game (regular season playoff game or Bowl game) that only involves one punt is worth watching in the eyes of any sports fan. We need to appreciate games like this, there have been numerous times in the past in which Super Bowl winning QBs play lousy games, just ask Big Ben in 2006, or Peyton Manning in 2015. They were abysmal. In fact, I think that all four Super Bowl teams in the four years since would have beaten either the Broncos or Panthers based purely off of superior QB play.

*As a Jet fan, I get pretty sick of chronic punting, so it’s nice to see a change.

This game doesn’t hurt Tom Brady’s legacy at all:

Pats haters, especially Jet fans were probably cracking open champagne due to this crushing defeat for the Patriots, this actually does nothing to hurt Brady’s legacy. Brady put on an historical Super Bowl performance for the ages. 28-48 for three TDs is nothing to sneeze at. In addition, he’s doing this at 40! Lets put this in perspective, John Elway won his two Super Bowls at the ages of 37 and 38 respectively, and his performances in both of these Super Bowls couldn’t even sniff Brady’s performance last night. When it comes to judging QBs in terms of Super Bowls, there’s more gray area than just a W or L. I care about your performance, and I was more impressed by this loss from Brady than I was by many Super Bowl wins from other hall of fame quarterbacks, including Aaron Rodgers against the Steelers. In fact, this performance from Brady was the most impressive I’ve seen in my entire life of watching football and the best Super Bowl quarterback performance in the last twenty years. Throwing for over 500 yards and three TDS without your number one receiving target is out of this world.

New England’s defense is really who blew that game. Nick Foles could’ve played in an Armani suit out there. Not only was he never sacked, he was never even under any pressure throughout any part of the game. There have been eight quarterbacks who have never been sacked in a Super Bowl, and seven of them of won. There has to be culpability on the defense, not Tom Brady.

This further extends my belief about football compared to other sports.

What I’ve written in the past is that football is an odd mix of a science experiment and a game of craps, primarily because of its vague complexities and heavy emphasis on probability. Super Bowl 52 proves this point.

Furthermore, this one Super Bowl performance completely took the offseason quarterback search and turned it on its head. Now that Nick Foles has stuck it to all the doubters and put on a Super Bowl performance to the likes of other Hall of Fame quarterbacks. This could’ve been Big Ben, Aaron Rodgers, Drew Brees, or Tom Brady. The only difference is that they have bigger names while Nick Foles has been convicted in the court of public opinion of being a “game manager,” whatever that means.

Moreover, this type of story line couldn’t have happened in any other sport. There is not one NBA finals game or MLB World Series game that actually shakes up an entire offseason like this. It hasn’t happened. Foles turned himself into a sought-after starter for teams lacking QB talent such as the Jets, Broncos, Cardinals, Jags, or Giants. This Super Bowl performance both changed the entire outlook on Doug Pederson and Nick Foles for the rest of their careers.

Unlike Dan Quinn last year (sorry bald guys) Doug Pederson coached like an assassin. He was aggressive all game, never froze up, and was never afraid to take risks; case in point, the Trey Burton trick play on 4th down. This is exactly how everybody should coach. Talk about outsmarting the smartest coach in football.

Another theme to the coaching match-up is keeping up with the times. The reason why the Eagles were able to be so successful is because they were able to keep up with the times. Sort of like how everybody needs to keep up with modern technology.  Everybody has a cell phone and a computer because it’s a necessity. Doug Pederson knows what kind of offensive system to run in the NFL nowadays. Sure, you can bloviate about how back in your day you read books and wrote your homework down with a feather, but the rest of the world is moving on and we’re leaving you behind. (I’m talking to you Jeff Fisher and Todd Bowles.) Just adjust! This is what Doug Pederson did and this is why he won. More head coaches should take note of this type of up-tempo, ballsy, play-action heavy style of offense, because it works! Take note Todd Bowles, don’t shove that nonsense smash-mouth football down our throats. This offensive system is the future of the league (especially with the Belichick era coming to an end in a few years) so take note head coaches.

I was dead wrong about Nick Foles and the Super Bowl.

I picked against the Eagles when they played Atlanta and when they played Minnesota because I had absolutely 0 faith in Nick Foles. I’ve complained in the past about the Saints losing to the Vikings because I wanted to see a potential Brees vs. Brady Super Bowl, but now, I just don’t care anymore. What we saw from Nick Foles could’ve been a performance by any top ten QB in the NFL (and that’s being nice to the likes of Matt Ryan and Cam Newton) and any hall of fame QB. Nick Foles winning the Super Bowl this year is reminiscent of Kurt Warner winning 18 years ago, nothing like Trent Dilfer. It would be an insult to throw Nick Foles into this category from the performance he put on.

Cris Collinsworth and the catch vs. non-catch controversy.

I’m not sure anybody else noticed this, but when Zack Ertz scored a TD in the 4th quarter, Cris Collinsworth actually said that he thought that the call was going to be overturned. What!? Zack Ertz took three steps with the ball, how can you possibly think that was going to be overturned? I often find Cris Collinsworth to sound like an irritating teacher at times, but this was the most clueless prediction I’ve ever heard from a color analyst. How can it not be a catch if you take three steps with the ball? And no, this is not like the Jesse James non-catch. Jesse James didn’t take any steps, so this is just a false equivalency.