The staff at As The Donald Turns needed a few days to gather themselves after the horrific events in Florida last week. What happened during the self-imposed sabbatical was a newfound clarity. We have friends who claim to be in the center of American politics. The center is where things get accomplished they say. It is where America really is. NO! No longer That may have been the case in years past with Tip O’Neil and Ronald Reagan dining together. But for there to be a center, two sides must move to the middle. Right now, one side refuses to move. The center is no longer a third political option. It is only a hopeful destination that requires starting on one end of the spectrum or the other and then both sides capitulating to reason. With that in mind, it is time for our latest installment, “Pick A Side.”

As The Donald Turns; Pick A Side

So of course we are now clear that there was Russian interference in the campaigns and they “picked a side.” It was time for Donald to step up. A foreign entity was messing with US democracy even though they were helping him, the leader of the free world was going to pick a side and get after those nasty Russians, right? Wrong!

“Russia started their anti-US campaign in 2014, long before I announced that I would run for President. The results of the election were not impacted. The Trump campaign did nothing wrong – no collusion!”

We will start with the fact that Donald filed for the copyright on the campaign slogan MAGA in 2013, so he knew for a long time that he was running and so did those close to him, and close to Russia. “Trump Family Consigliere” Michael Cohen also acknowledged long ago that Donald started his campaign finance planning in 2014.  Secondly, notice anything else in the tweet? Right….not one bit of anger towards Russia.

Like everything else Donald does, it was all about him. He felt absolved even though nothing in the announcement vindicated him. We again quote Deputy AG Rosenstein, “There is no allegation in this indictment that any American was a knowing participant in this illegal activity.” There is nothing in THIS indictment. It would be naive to think this is the end of it all and Donald and his people have been cleared. In fact, later, we will discuss how just the opposite is true.

Donald tweeted about Russia, the investigation, the campaign and the hacking 13 times from Friday afternoon through Sunday night. Not once did he express anger at Russian. Not once did he suggest he would impose the sanctions that Congress passed in the Fall with a near unanimous vote. No, he picked a side, and that side was him taking a personal victory lap despite having the details wrong over the well being of the democracy.

From there it was on to Florida. He was going to Mar-A-Lago for the weekend anyway so why not go to Parkland and visit the hospital where some of the gunshot victims were. Past presidents have met with victims of tragedies. They nurtured, consoled, and listened. Donald, however, is not big with the empathy gene. He listened to the stories of the surgeons and the police officer who apprehended the shooter. He even advised the cop that he did not brag enough about it. “That was modest. I would have told it differently. I would have said ‘without me they never would have found him.'” That’s because that is who Donald is. It’s always, eventually, about him.

And of course he did the thumbs up photos. No one has ever told him how awkward it is when posing in a hospital with victims of a horrific shooting; that the big thumbs up photo looks absurd. Actually, it usually looks absurd, but it is his go-to pose at photo op time. 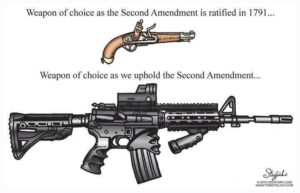 No one thinks gun regulations will get rid of all the problems. It is clear at this point that America is generally a more violent society than many others and there is no putting that Glock back in the gun holster And Donald has no interest in crossing swords with the far-right wing of his party…hey swords…we’d let you all keep swords. That would be ok. He is in danger of the House flipping to the Democrats in November as it is.

Add to that, this week, former Trump aide Richard Gates is expected to turn cooperator in the Mueller investigation. He is expected to flip on Paul Manafort, who will likely, at some point flip on Trump insiders like Don Jr. and Jared Kushner.

So with all that ahead of them, no one has the stomach to buck the NRA. They will just offer their thoughts and prayers to victims of future bloodshed. And Donald will tweet pictures of a big thumbs up because he has picked his side and it is himself.