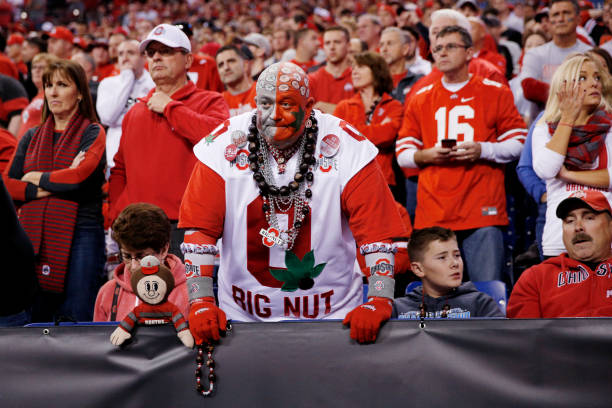 Since the committee announced that Alabama was going to be the number 4 team in the playoff (over Ohio State,) I’ve heard a lot of nonsensical, absurd arguments from Ohio State fans and Alabama/SEC haters alike.

“We got punished for scheduling a tough non-conference team” –every Ohio State fan on social media for the past 4 days.

First of all, understand why you didn’t get in. When it comes to college football, all losses aren’t created equally. The committee has set this precedent repeatedly. If Alabama went on the road and lost to Texas A&M by 31 points, the committee wouldn’t have been forgiving. Best part is, all the Alabama haters Ohio State fans and of course characters like Joel Klatt and Danny Kannell (who have set out on crusades against the SEC) wouldn’t bat an eye. Don’t twist reality, Ohio State was left out of the top 4 because they were curb-stomped by a 7-5 Iowa team. This is a detrimental loss and enough to keep any team out of the playoff. There are only three guarantees in life: death, taxes and top 4 college football teams not getting curb stomped by mediocre teams.

Anyway, since I’ve beaten a dead horse with Ohio State’s loss to Iowa… there’s not one shred of evidence at all that the committee punishes teams for scheduling tough non-conference games. This is a perfect example of college football fake news. Alabama scheduled Florida State in the non-conference, which is every bit as favorable as scheduling Oklahoma. Sure, Florida State went 6-6 this year, but if Deondre Francois didn’t go down in the fourth quarter against Alabama ending his season, they’re a top team. Furthermore, these games are scheduled five years in advance, it’s not like they hopped into the DeLorean time machine with Doc Brown and Marty McFly and saw that Florida State was going to be 6-6 and that Oklahoma will become a top 4 team. They don’t know anything five years in advance! Bottom line is this, Oklahoma and Florida State are consistently major college football programs.

“The committee is inconsistent by putting in Alabama over Ohio State”

Let me defend the Enlightened 13. I’ve taken them to task for the decisions they’ve made, and they’re inconsistent at times throughout the season, but they haven’t been inconsistent in regards to who they’ve actually placed in the final four at all throughout all four years of the playoff. First of all, Ohio State fans making this argument are forgetting that Ohio State has TWO losses, not one but two. Newsflash, no two loss team has ever made the playoff, even if that team did win their conference. This doesn’t mean it won’t happen in the future, it absolutely can happen, but it never has happened, so how is that inconsistency from the committee? It’s just the opposite. I love how Ohio State fans have completely flipped their own criteria of what constitutes a playoff team in the span of a year, and they’re calling the committee inconsistent! Apparently they don’t teach about irony at Ohio State.

“Alabama got in because of reputation.”

Again, FAKE NEWS. From all the reasons I previously laid out, this makes no sense. Matt Leinart actually sent out this erroneous tweet claiming that Alabama would have gotten in if they had lost twice. If this is the case, why was Alabama ranked outside of the top 4 before Championship Saturday? They were potentially going to be left out with one loss, let alone two. Furthermore, Ohio State has one of the highest reputations in college football with one of the best college football coaches of all time. Ohio State has always been a traditional favorite, Ohio State fans are making it sound like they were the underdogs.

“We need to expand the playoff to 8 teams.”

NO, please God NO! We don’t need to expand ANYTHING. If anything, this year was proof that we shouldn’t expand the playoff because we have a bunch of teams with largely mediocre resumes. Why should any team that didn’t get in the playoff this year get in? What’s great about college football is that the regular season is like a playoff, this is why college football is my favorite sport, and I don’t even have a favorite team. I’m not saying Ohio State can’t compete with any of the top four teams, but should college football change the entire playoff structure because they got left out? Of course not, that’s ridiculous. I’ve even seen some suggestions that there should be an invitation for a non-power five team to get in an 8 team playoff. NO, another awful idea, a non-power five team has no business competing with any of the top 4 teams. Why is UCF even playing Auburn? This is an insult to Auburn, Gus Malzahn, and the entire state of Alabama. UCF will get flattened like a pancake.

But but but… Conference Championships…

Three: Why use such absolute qualifiers regardless of any context? When you go buy a car, do you only look for a car in one color, or do you just look for the best car at the best price? Obviously you just look for the best car for the best price. Why does this standard change when it comes to college football? What if the two best teams are in the same division? Should only one of them get in a team less worthy of the playoff spot in a different conference get in? In addition, one of those teams is playing at home and by these qualifiers, the road team wouldn’t be getting a chance at a neutral site. One size-fits-all rules across conferences can’t work in college football.

“The committee placed Alabama over Ohio State because of TV ratings.”

Really, the only place I saw this was on twitter when Danny Kanell sent a tweet claiming that the committee put Alabama over Ohio State for TV ratings. This take is so ridiculous I just have to address it. If anything, this would be the opposite. It would be better for T.V. ratings if there were geographical diversity, but three of the four teams in the playoff are in one corner of the country (Southeast) and all four of them are in the South. I haven’t looked at a map in a while, but last I checked, Ohio is in the Midwest. Furthermore, the committee would be more inclined to put a Big Ten team in the playoff because including the Big Ten would increase T.V. ratings! What amazes me about this tweet

“But, but, but our resume”… Ohio State fans are the used car salesman of fan-bases.

Every Ohio State fan has been talking up their team’s resume like a used car salesman talks up a 1993 Dodge Ram that nobody wants to buy. “But our resume this and that, look who we beat.” Seriously, what about your resume, it’s mediocre. You beat Michigan State, Penn State, and Michigan, big deal. Penn State was a good win, but Michigan State and Michigan weren’t all that impressive to anybody. A 1993 Dodge ram isn’t a brand new BMW. Sorry Ohio State fans, the committee walked out of your car dealership Sunday afternoon and bought the car Alabama sold them.

“We can look past the loss”