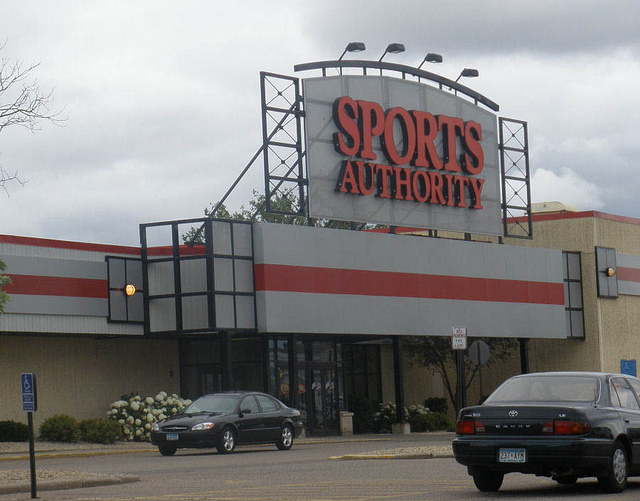 Rumors of Sports Authority Inc, the nations largest sports retailer facing bankruptcy are growing as the company missed a $20 million interest payment in January. Apparently the retailer had until February 14th, to pay off the loan that kept them from bankruptcy.

Earlier this past week, the S&P downgraded the company to level “D”, better known as the cemetery for company that will not repay their debts.

The battle to save themselves is just beginning especially since questions are swirling about if Sports Authority Inc. will keep the $6 million naming rights to Sports Authority Field at Mile High.

Sources at CBSLocal have suggested that Sports Authority is in the process of preparing to file for the inevitable chapter 11 bankruptcy.

“They have missed a debt payment. That’s a big deal You don’t do that unless you’re running out of money.”

Duber-Smith seems to think Sports Authority financial problems can be linked to its $60 million dollar gamble on the naming rights to Mile High. And now that gamble hasn’t paid off.

Duber-Smith echoed his theory by saying:

“You have to have additional money to spend in order to leverage that sponsorship, in order to get the maximum value out of that. And there was every indication that they had pretty much blown a lot of their marketing budget.”

Now as many as 450 of its stores may be closing its doors, but that doesn’t necasrily mean it’s the end for Sports Authority Inc.

Duber-Smith was optimistic that this bankruptcy is a merely a structuring:

“In essence, they’re going to shrink, hopefully in order to get bigger later on. It’s like retreating, and then living to fight another day.”

Others however think that Sports Authority Inc. $60 million gamble isn’t solely responsible for the companies downfall.

Matt Yonin, of Tigris Sponsorship and Marketing, said there definitely is a direct correlation between the stadium naming rights and how you sell your product.

Yonin didn’t think that the companies’ naming rights to Mile High stadium was a direct reason why they had to file for bankruptcy.

“There’s just that loyalty that comes with it that you can’t pay for in a commercial,”

Price and Yonin believe that Sports Authority Inc. has lost its loyalty. A reality that many large big box retailers have faced in the past few years with the emergence of e-commerce and sites like Amazon.

More news should be breaking in the upcoming weeks as we learn more about the exact details of the missed debts payments by Sports Authority Inc.