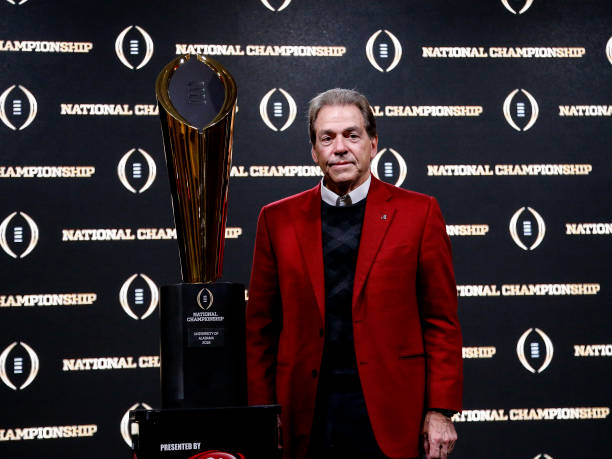 Where does Nick Saban rank as an all-time great?

Since Nick Saban dug himself out of a 13-0 hole to win Monday’s national title game, there isn’t much debate about where Nick Saban ranks as an all-time college football head coach. Clearly, he’s number one by any objective measure. Now, the debate is where he ranks as an all-time football coach or an all-time coach in sports. First, I would take Nick Saban as a football coach over anybody living or dead, and yes, that includes Bill Belichick. What Nick has done in Alabama has been more impressive than what Belichick has done in Foxborough. Moreover, what Saban has done as an SEC head coach has been more impressive than Belichick’s record.

Nick Saban won seven titles as the head coach of LSU and Alabama in a combined total of 16 years. This means that 3 out of every 8 years as an SEC head coach, he’s won a national championship. In addition, I don’t care what anybody says, it’s significantly more difficult to win at this level in college football than in the NFL, particularly if you have a franchise QB. Not to take anything away from Bill, but he never won anything before Tom Brady, who is in my estimation, the best QB to ever live. On the other hand, Nick Saban has to rebuild his team every couple of years. He was never given a college equivalent of Tom Brady that can remain a star on his team for seventeen years!

Saban as an NFL head coach?

The idea that Nick Saban can’t coach in the NFL is absolutely asinine. He had a 15-17 record as the Dolphins head coach for two seasons. How is that a failure? He never was given the chance to succeed. Now, he did leave the Dolphins because Alabama gave him a better offer, but that’s just because Saban always left teams for better offers. Nick Saban treated every football team before Alabama like Tinder dates, he just swiped right and moved on to hotter options. He did that to every team he’s ever coached, except Alabama of course, but don’t act like it can’t happen again. If an NFL team throws money at him, he’ll certainly take the offer and leave Alabama out to dry, because why wouldn’t he?

A lot of NFL fans don’t understand how coaching works and how football works. What’s amazing is that Bill Belichick went 32-34 with one playoff win when he coached Cleveland, virtually the same record in a span of 4 seasons as Saban’s in a span of 2 seasons. No NFL head becomes a legend right away, it always takes time. In the NFL, coaches need rosters and functional teams around them and the fact that Bill Belichick couldn’t win in Cleveland doesn’t speak to his ability as a head coach, same with Saban’s inability to win in Miami, it’s just asinine to use this against Nick. Even better, Nick is 2-2 against Bill Belichick as a head coach during his two-year tenure in Miami!

Think about this, if Drew Brees passes his physical in 2006, the Dolphins would’ve signed him, and there’s a solid chance Nick Saban would’ve won multiple Super Bowls and succeeded as an NFL head coach. Instead, he was stuck with Daunte Culpepper and went 6-10 in 2006, and Nick Saban was through with the nonsense and left for Alabama. All coaches need a franchise quarterback to win in the NFL, so holding this against Saban is just short-sighted and ignorant.

For Nick to Complete his Legacy, he Needs to go Back to the NFL:

Don’t get me wrong, I’m NOT one to say that coaching in the NFL is more impressive than college, I just wrote it three paragraphs back that it was asinine to say that coaching in the NFL with a franchise QB is the equivalent to winning at the college level. However, Nick has nothing more to prove at the college level. His winning speaks for itself, nobody else even comes close. The only head coach that may become close to Saban is Urban Meyer, but even that’s a long shot and if it did happen, won’t be a discussion for at least another ten years. If Nick can win in the NFL, he’s establishing his legacy as a football coach who can succeed in both college and the NFL, which would make him unarguably the most dominant coach in the history of sports.

Why would he leave for the NFL?

One common sentiment I hear from many sports fans is that Saban is comfortable in Alabama, so why would he leave? Easy, it’s because he’s a winner, and if he finds something better than he’ll drop Alabama and go to an NFL team. This is how winners think, they take risks and always look to make more money and get even better than they already are. The idea that Saban is just content with what he’s done is insane. All-time greats like Nick are never content. In the post-game interview, he said this is the greatest moment of my life, and barely even cracked a smile! After celebrating in the locker room for maybe fifteen minutes (and that’s being nice) he definitely went back to recruiting. He’s already focused on next year’s team. My theory is that all-time greats in any particular field are so obsessed with their craft and they just don’t think like the rest of us, whether you’re talking Howard Stern, Picasso, Steve Jobs, LeBron James, Michael Jordan, Nick Saban and whoever else you can throw onto that list.

What about the SEC?

The other debate that this game sparked as obviously the strength of the SEC. As your next great college football philosopher, I can promise you one thing, I have no rooting interest in any particular team or conference in college football, it’s just based purely from an unbiased perspective from what I see on the field. I’m like a political commentator who isn’t left, right, up or down. For the record, I’m from New Jersey, it’s not like I’m from the South with an intense passion for SEC football.

Despite what Big Ten fans would lead you to believe, SEC is still the strongest conference in college football. The reason I say this is because Georgia and Alabama both beat out Ohio State, which is the best team in the conference. Anything other than what I just mentioned, both conferences are actually pretty even, (to be nice to the Big Ten, Vegas says otherwise). What happens at the top of the conference actually matters the most. And no, the fact that Northwestern beat Kentucky on a failed two-point conversion is not evidence of the Big Ten being stronger than the SEC. In fact, it’s the opposite. Kentucky ranks lower in the SEC (probably 7 or 8 depending on where you want to rank Texas A&M and Northwestern ranks around 5 or 6, depending on where you want to rank them against Michigan. The fact that a team that ranks significantly lower in the SEC than Northwestern did in the Big Ten only lost on a failed two-point conversion actually helps the case of the SEC better than the case over the Big Ten!

“And the ratings would plummet because there are two SEC teams”

All these anti-SEC fear mongers on social media were bloviating about how awful it is that there are two SEC teams in the national championship. First of all, this goes to show that the double standard is real, if this were any other conference, characters like Joel Klatt, Danny Kanell, and any other anti-SEC fear monger wouldn’t bat an eye, but because it’s the SEC, they have to get to their battle stations to fight back against this horrifying injustice. The truth is, the only reason why two SEC teams made the title game was that those were the two teams that earned it by every measure possible. Each one a playoff game, and each made the playoffs based on the criteria that the committee has set in place since 2014. This is just two teams that happen to be in the SEC earning their way into the title game, protesting the game because there are two SEC teams playing is stupid.

What’s amazing is the prediction that ratings would plummet because it’s two SEC teams. Yet, the ratings were higher in this year’s national championship game since Oregon-Ohio State three years ago. More people watched Alabama-Georgia than Alabama Clemson for two years in a row. I guess that theory falls flat on its face.