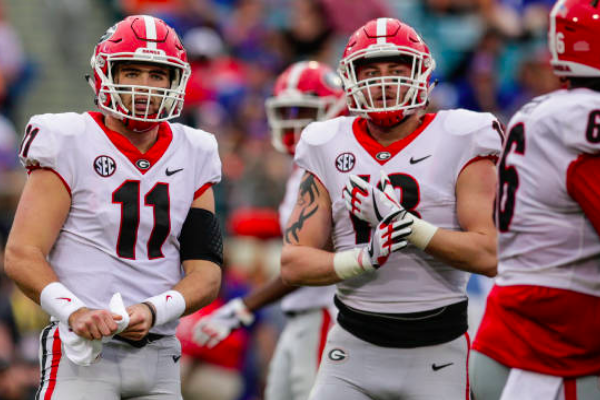 It’s that time of year again. The time of year when spasms of apoplexy dominate the college football landscape because of the ruling of a group of the enlightened 13. Right off the bat, here would be my top four, Georgia, Alabama, Notre Dame, Ohio State, in that order. Here are some takeaways I have from the committee’s decisions.

I was surprised that the committee ended up favoring Georgia over Alabama, but it was the right move. Over the past couple of years, Alabama has established themselves as the default number one team. Despite this, Georgia has better credentials than Alabama. They have the best non-conference schedule in all of college football and the best win of any undefeated team in college football, beating Notre Dame on the road. Just because of their remarkably strong non-conference schedule and the fact that one of their wins is better than anybody Alabama has beaten has proven that Georgia should be ranked ahead of Alabama, just from the perspective of who is most deserving. Even if Alabama is a better team, they’re going to play each other in the SEC title game at a neutral site so it won’t matter for Alabama anyway.

Notre Dame got the credit they deserve. As I wrote last week, Notre Dame is the mind**** team of college football ten feet deep into the overrated-underrated rabbit hole. But this year, they’re underrated and they got the credit they deserved. Their last two wins have been blowouts against ranked teams, better wins than most teams have enjoyed. It may not have been a better win than Ohio State over Penn State, but Ohio State has a worse loss than Notre Dame, and Notre Dame has two quality wins, while Ohio State has one quality win. In other words, I like Ohio State, just because they beat Penn State, but I’m not sold on them yet because the past two seasons they’ve turned out to be the Meryl Streep’s of college football, a bunch of “phony balonies.” That being said, I like Ohio State this year; they have two quality match-ups against Michigan and Michigan State in the next three weeks. I can see them surprisingly struggling against Michigan just because you don’t know what to expect from Harbaugh. Last year, Michigan went into Ohio State and outplayed them for three quarters, and if it weren’t for a few bad play calls and turnovers Michigan goes to the Playoff. In other words, if Ohio State can just establish themselves, they’re good.

Oklahoma, Penn State, and Clemson will be my first three teams out, in that order. I’m not high on any team playing west of the Mississippi River this year to end up making the Playoff. That being said, Oklahoma is deserving of being ranked #5. In fact, I would even accept the argument that they should be ranked four ahead of Ohio State, but I would put them at five because they don’t have the quality wins that Ohio State has. Just like Ohio State, they’ll be given the chance to establish themselves, but they probably won’t. The Big 12 is like that troublemaker kid we all went to high school with. He’s constantly in trouble, then he starts behaving, but he’s bound to do something stupid in the next five minutes, so keep a lookout. This is exactly how I feel about the no-defense conference Big 12. In fairness, they’ve actually had a decent season so far with Oklahoma, Oklahoma State, and TCU. That being said, Big 12 games are always decided the way NBA playoff games are decided, one or two key points or one or two turnovers, that’s it. This happens too often in the Big 12 so it’s clear to me that Oklahoma State, Oklahoma, and TCU will all end up with two losses and Big 12 fans will be screaming to the moon about how much they hate the committee.

As far as Penn State, I have to tip my cap to them. Their loss to Ohio State in the house that Urban built is the most forgivable loss of the season, even more so than Notre Dame’s loss to Georgia. Like Ohio State and Clemson, Penn State just haven’t established themselves yet. They have one quality win against Michigan, and that win alone isn’t good enough for them to beat out Notre Dame, and certainly not Georgia or Alabama, and not even Oklahoma. Their non-conference isn’t the best either. Pitt was the best team that they beat. Don’t get me wrong, that’s better than Wisconsin scheduling the University of Phoenix as their best team, but it’s not a great look when you compare it to Georgia’s, Ohio State’s or Oklahoma’s ballsy scheduling tactics.

Clemson deserves to be number seven. I feel that Clemson is ranked way too high and is only ranked this high because they won the national championship last season. It’s not that Clemson can’t compete with any team in the top seven, they definitely can, but they’re not deserving of being in the top four yet. Like Penn State, they just haven’t established themselves yet as a top four team, and they lost to Syracuse. I get that Kelly Bryant went down, but they lost to freaking Syracuse! I count that as a less forgivable loss than Penn State’s loss to Ohio State. Penn State also blew Michigan’s doors off, which is more impressive than any of Clemson’s wins so far.

Michigan got screwed. This season, the two teams of whom I’ve been most critical have been Michigan and USC. In fact, If you listen to my radio show (1-3 ET Fridays) I stated that Michigan and USC should play in the annual Overhyped Bowl. Michigan has been getting their butts kicked head to head by their rivals and their offense is so weak that I would advise gamblers two things, one never bet on Michigan to cover and two, never bet the over on Michigan games, unless they’re playing a top six team, in which they would get blown out. But it’s absurd for the committee to overlook how good Michigan actually is, as weird as that sounds. At least USC is ranked at #17, and I would put Michigan ahead of USC. Michigan is overhyped, but at least they’re losing to their rivals in the best division in college football, USC hasn’t done anything. Jim Harbaugh is arguably the third or fourth best coach in his division, but he’d be the best coach in just about any other division in college football. Who cares if they went into Happy Valley and got their underwear blown off? The same can be said about any other team not in the top seven. How can the committee put an overrated Mississippi State team or a pedestrian LSU team ahead of Michigan? USC, I understand, but LSU and Mississippi State? Give me a break with this SEC worship. The truth is, even Michigan would run through twelve of the fourteen SEC teams. Get over yourselves SEC fans, the Big Ten East is just BETTER. Apparently, the committee needs to read that too.

I hope you all have a great weekend and enjoy the games this week.