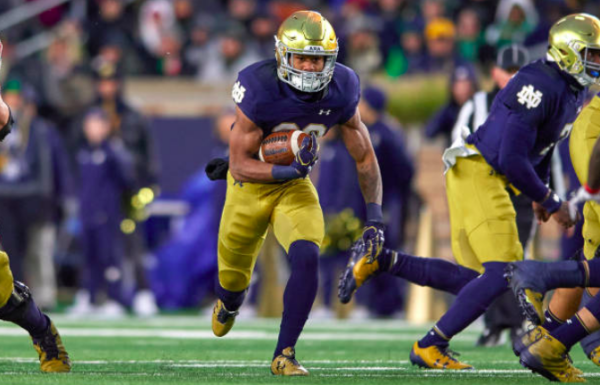 Right now, college football will be finding themselves in a frenzy, a frenzy that we haven’t seen in a while. Every year, some fan-base gets pissed off for getting a raw deal from the Playoff selection committee, just ask Penn State fans last year. At this point this season, there are a solid seven teams that are contenders for the playoffs: Alabama, Clemson, Okahoma, Ohio State, Penn State, Georgia, and Notre Dame. Since there are only four teams that are capable, it should be interesting to see which teams are the ones to get the ax. Unfortunately, I find the committee and college football fans alike to be largely consistent in what they qualify as a playoff worthy team, but also largely inept at the whole selection process.

I’ve said many times that Notre Dame is the mind**** team of college football. Many seasons prior, the good old Catholics have been held to an undeserving pedestal purely because of the shield Notre Dame. If I were writing online at the time, I would’ve rightly called out the sports media for not doing their homework on Notre Dame football. This season, it’s precisely the opposite, and I’m calling out the media and college football fans alike for precisely the opposite reason, Notre Dame is underrated, not overrated. I never thought I’d get this far down the overrated/underrated mumbo jumbo rabbit hole, but I guess anything is possible. Now, It’s imperative that Notre Dame joins the ACC. Notre Dame has one loss to Georgia, they lost by ONE POINT. On top of this, they just blew USC’ and NC State’s doors off. Most of the time, losses like this early in the season are beyond forgivable. Just ask Ohio state, Alabama, and Clemson over the past few years, and all of these aforementioned teams had worse losses than Notre Dame did. Despite the one-loss forgiveness most of these teams have enjoyed, Notre Dame’s playoff chances are still completely out of their own hands, quite simply, because they haven’t joined a conference.

Think about this, there is a good chance that no matter what happens, there will be four teams ranked ahead of Notre Dame at the end of the season. Obviously Alabama, then Georgia, Ohio State, and Clemson. If Oklahoma wins out, then Oklahoma is probably also on the list, even though there’s a small chance this happens. If Notre Dame were to just come to their senses and join the ACC, this wouldn’t be an issue at all, really. If Penn State loses a close game to Ohio State in the house that Urban built, Penn State is still ranked ahead of Notre Dame, because at this point in the season, no team in College Football is going into Columbus, Ohio and telling Urban and big boy JTB what to do. Not Harbaugh, not Mark Dantonio, and not James Franklin, though he came really close.

Moreover, Georgia is going to run the table until they head to Tuscaloosa. Even then, Georgia is competitive. It would be difficult for the committee to hold a loss to Alabama in the SEC championship against Georgia, especially when they beat Notre Dame. So where does Notre Dame go? They go to the New Year’s Six, but forget about the college football playoff.

If Notre Dame just joined the ACC, they would be able to go head to head with Clemson, and they would at least have a shot at making the playoff. If Notre Dame were in the ACC this season, they would clearly be one of the top two teams in the ACC hierarchy, just like Georgia/Alabama and Penn State/Ohio State. If they lose to Clemson, that’s another conversation for another day and opens up a whole different debate. In fact, it would spark a whole different debate about the value of conference championships and strength of conferences.

All Notre Dame can hope for is that Clemson somehow loses against another easy team, Georgia takes a turn for the worse and gets blown out by Alabama and barely wins out, and Ohio State loses at home. At least two of these three event will have to happen and all of them are unlikely.