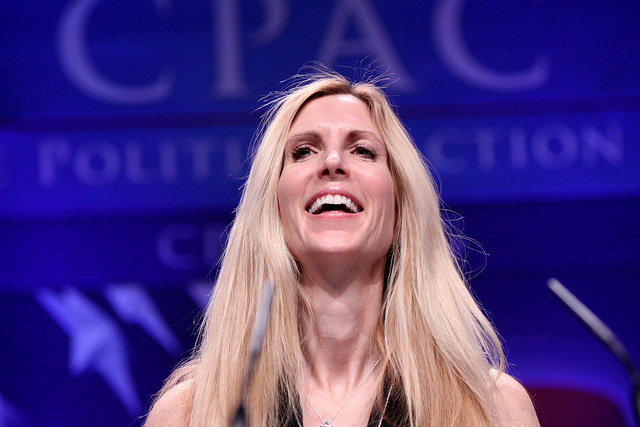 I know you said “no more Muslim immigration” after the Paris attacks and you insinuated that conservative idol Donald Trump had essentially won the 2016 presidency because of the attacks, but you’re wrong.

You said the answer to stop terrorism here in the United States is to “stop importing Muslims.” But here’s the thing Miss Coulter, Islam doesn’t equal terrorism and claiming Trump won the election because of the attack is ignorant.

It just shows how vain you truly are. After viewing your tweets it is even more evident that you are a part of the problem. Deporting everyone or building a mega wall won’t do anything. It will only alienate everyone as you attempt to create your own Utopian society.

What’s the upside of letting millions of Muslims migrate to western countries?

Can we all agree now? No more Muslim immigration. How is this making life better for us? But the mass immigration machine churns on …

It is really sad that you want to place this blanket on everybody that looks different. The benefit of allowing individuals of different faiths and ethnicity to move into western countries is to increase diversity, which ultimately strengthens the nation as a whole. You have to understand that just because Islamic faith is different than your Christianity doesn’t mean it leads to terrorism, as you suggested.

Here’s the thing though, this isn’t the first time you’ve made an absolute fool of yourself, back in 2012 you called President Obama a retard and praised Romney for taking it easy on him. It’s disgusting that you thought it was funny to use an outdated and insensitive term to refer to a person.

How about last May when you said that allowing immigration will let uncles rape their nieces? I just can’t fathom that a Cornell graduate could be so stupid. I get that you claim yourself as a success story because you’ve made millions but your money comes from ignorance.

You might say I’m overreacting and reading too much into the fact that you called the president a retard or that immigration promotes rape, but I’m not. Because I haven’t even gotten to the worst of it yet, you once said:

“If we took away women’s right to vote, we’d never have to worry about another Democrat president.”

The moral of the story is that your words hold no value, because you repeatedly say ignorant things.

Your claims encourage America to go back before the civil rights movement, before the thirteenth and nineteenth amendments. And now you are equating all Islamic faith and acts to terrorism and that is what I don’t understand.

This is just your ignorance coming out. If we actually want to ensure that what happened in Paris doesn’t happen again or to help America progress, the answer isn’t just to deport everyone or bomb away as you said in one of your tweets. Nor is it to not allow women to vote or stop immigration.

The logical solution here is not to act in the moment in either situation. In Paris we need to wait until the investigation finishes to get an entirely clear picture of what actually happened, then retaliate, if necessary. Saying that we should deport everyone that looks “Islamic” or “Third World” only adds to the problem. It does not solve the issue at hand. It only gets us farther away from our goal, which is Progress.

So, Miss Coulter, if you are reading this, I want you understand two things: Think before you act and what you say reflects the type of individual that you are.