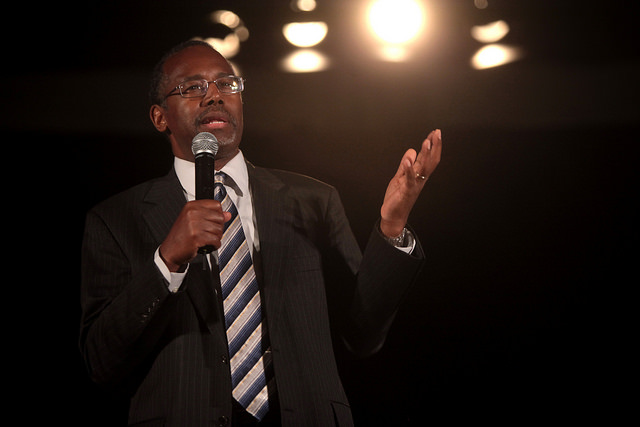 This upcoming election may be one of the most important elections in recent history for the advancement of foreign policy.

With the presidential spotlight shifting to foreign policy, Republican candidate Ben Carson’s poll number have taken a drastic hit after voters found out just how limited Carson’s knowledge of foreign policy is.

In an effort to distract from his embarrassing mix-up of the Palestine group Hamas and the food Hummus, Carson has shifted his focus and rolled out a new healthcare policy.

The recent move shows that Carson is flailing to find something to talk about as the presidential candidates are focusing on terrorism and national security, subjects Carson has no knowledge of.

As a candidate, Ben Carson has fumbled and mumbled his way to accuse China of being militarily involved in Syria, and misspoke about the nations in NATO.

In addition, after the Paris attacks, Carson struggled to find the answer of “I don’t know” when asked about when NATO’s article 5 should be invoked.

Then, when asked to name an ally or world leader he would enlist to help fight the Islamic State, Carson drew a blank.

He couldn’t think of a single one.

It’s embarrassing how little the man knows about anything outside of the United States.

If Americans want to strike down and end terror, Carson is clearly the wrong man for the job.

His poll numbers reflected just how much foreign policy means to voters.

He’s hit rock bottom in New Hampshire by ranking at 5%.

In the State of Iowa, where his religious ties and social conservationism secured support, his percentage has fallen to only 13%.

Iowa should be Ben Carson’s highest priority as it’s the state that currently aligns closest with his value.

If he loses Iowa, it could be a pre-cursor of what he can expect next year.

In fact, his loss in Iowa has just done that.

In late October, Carson was the pretty much the man to beat at 29%, and now his support has dipped 10%.

It shows that Carson cannot contend without being a whole candidate…which he couldn’t be for many many more years.

In response to his dropping numbers and lack of foreign policy experience, Carson said:

“Well, basically, people feel that I don’t have foreign policy experience and I understand why that would be the case because they listen to the narrative that only politicians can fix this.”

It’s clear Carson thinks that his work as a surgeon will improve his foreign policy, but that’s quite conceited.

Since then, he’s launched a trip to Jordan to visit a Syrian refugee camp, but faltered days later when he delivered a speech on Jewish history where he repeatedly mispronounced “Hamas” as “hummus.”

Carson still draws crowds to his events but the lines are getting shorter and the energy is diminished after he continues taking false steps that jeopardize his legitimacy as a presidential hopeful, especially when the nation’s focus is on a topic Carson knows nothing of.

I would not foresee anything changing with Ben Carson’s campaign unless he can convince the America people they’ll get rich on his watch.