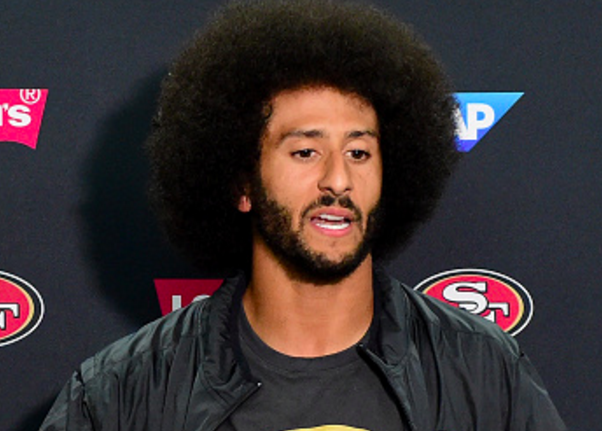 In the midst of being one of America’s most popular athletes (at the moment), Colin Kaepernick is making news almost every day. Most notably, Kaepernick decided that he would sit during the national anthem of 49er football games because of his lack of pride in a country that oppresses black people. Here is his initial quote on why he sits:

“I am not going to stand up to show pride in a flag for a country that oppresses black people and people of color. To me, this is bigger than football and it would be selfish on my part to look the the other way. There are bodies in the street and people getting paid leave and getting away with murder.”

I would like to start out and say that I am a heavy enthusiast of our country’s First Amendment, but with that being said, once you enter your ideas and opinions into the marketplace of society, they should be judged fairly. And for the most part, I do not believe Kaepernick’s opinions are being judged fairly.

Here are my problems with what Kaepernick has said and/or done.

First, I realize his intent is not to disrespect our country’s troops, but by refusing to stand during our national anthem, he is. I don’t want to make this a major issue because I realize this is not the main purpose of Kaepernick’s message, but the relevance to my problem with this is that it supports the fact that Kaepernick has not approached this situation in an intelligent, nor mature manner. It is without doubt that he has acted unprepared and foolish throughout his black oppression movement.

Next, can we all realize how big of a generality he is making. I mean basically what he is saying is that black people are oppressed in our country. Yes, that is true, obviously. But the generality of the statement doesn’t solve anything. It’s an undeniable statement. Every socially aware person in America knows that minorities are treated with disrespect, which can later lead to oppression and discrimination. I need various specifics about why you think blacks are being oppressed and how we can fix this. That would be an infinitely better way to approach this issue, rather than just stating the obvious that blacks and people of color are oppressed.

Unfortunately for Kaepernick, he is very wrong about the two specifics he gave us.

“There’s a lot of things that need to change. One specifically? Police Brutality. There’s people being murdered unjustly and not being held accountable. People are being given paid leave for killing people. That’s not right. That’s not right by anyone’s standards.”

First, he stated that police officers are getting paid leave while killing people on the streets. Ok, when you look at the number of police officers in our country, a small percentage of them unjustifiably kill people on the streets. Also, they don’t get a paid leave for killing someone. Kaepernick does not understand that when a police officer shoots someone, justified or not, he is to be taken off the streets for his own safety purposes while a thorough investigation on his or her case is being acted upon. Again, this way the officer is protected while being paid, because he is not found guilty yet. And remember, in this country, you are innocent until found guilty, meaning they have to pay the officer if police protocol demands for the cop to remain off the streets.

Along with his misconception of paid leave, he butchered his view on police brutality. In fact, Kaepernick is completely wrong. 73% of people shot by an officer are either white or Hispanic, meaning only 27% of people shot by cops are black. It seems that Kaepernick believes it is the other way around. Also, according to a study from downtrend.com, more African-Americans kill whites than vice versa. Kaepernick is completely blinded from the statistics and again, his flawed stance is exposed again.

This makes me curious; why do people in our society think that our federal government is fundamentally racist? I understand that specific state and city laws may arguably treat people of color in a negative way, but not our federal government. I mean seriously, if anyone can give me a specific government action that oppresses people of color, I would love to hear it. If whatever law I’m missing allows me to be oppressed while making 19 million dollars a year then sign me up!

It’s simple, our  federal government is not racist. When I look at oppression from the perspective of our federal law, it does not exist. There is no specific oppression toward people of color from our nation’s government. In fact, what I see is a federal government that is working towards treating ALL of its citizens equally. Not to mention, have we forgotten that our country is being run by a black president with a black women as our head of the Department of Justice?

After Kaepernick made his initial statement giving reason to his unprecedented actions, he then came out and took shots at both of our presidential candidates. Kaepernick made time to mention how Donald Trump is “openly racist” and how Hillary Clinton should be in jail.

It astonishes me how this does not get more attention.

Our media today is so liberal that we would rather promote Kaepernick’s stance on black oppression that tell the real story of how ridiculous this all is. I mean, he took shots at our presidential candidates publicly and nobody is talking about it.

Kaepernick’s political views have just been blatant generalities that certain far-left citizens love to hear, despite his obvious misconceptions when he attempts to break the issues down. It doesn’t help when he also struggles to understand basic political terms such as “blanket indictment.” When asked about a blanket indictment of our law by USA Today, Kaepernick responded with, “what’s that?” and “I don’t really understand what you’re getting at.”

-Q: Are you concerned that this is seen as a blanket indictment of law enforcement?

-Q: It can be seen as a blanket indictment of law enforcement.

-KAEPERNICK: As far as what? I don’t really understand what you’re trying to get at.

-Q: You say people are getting murdered by police. You seem to indict all of police.

-KAEPERNICK: There is police brutality. People of color have been targeted by police. So that’s a large part of it. And their government officials. They’re put in place by the government so that’s something that this country has to change…

Finally, Kaepernick added, “Yes. I’ll continue to sit. I’m going to stand with the people that are being oppressed. To me, this is something that has to change and when there’s significant change and I feel like that flag represents what it’s suppose to represent in this country is representing the way that it’s suppose to, I’ll stand.”

Basically, Kaepernick is taking a “stand” when he will get no reasonable outcome to his satisfaction, all while he completely misses on almost all of his specific problems with our government and society. The only thing he has gotten right is his basic generality of oppression towards people of color in America, but again, every socially aware person in our country knows that oppression towards minority groups is a problem.

My final dilemma with Kaepernick is that he said he feels personally oppressed. Give me a break! When Kaepernick was very young, a white couple took him in while his birthparents couldn’t take care of him. Now doesn’t this contradict his idea of racism in our country, just by his own life experiences? If our country was truly as racist like he thinks it is, then why would a young white couple take in an abandoned black kid and raise him lovingly while he goes on to play in the NFL? His opinions don’t even support his own childhood. I mean, how can he feel oppressed when he is making 19 million dollars a year?! If there is some sort of club or way to join his personal oppression, count me in!

Now, I realize I have been harsh on Kaepernick, but once you enter your ideas and opinions to our society then you become fair game for ridicule. As a First Amendment enthusiast, I respect Colin Kaepernick’s intent to make a change in how we treat our minorities. But Colin, take a note from Russell Wilson or even the group of NBA players who spoke at the ESPYs (Carmelo Anthony, Chris Paul, Dwayne Wade, and LeBron James). In my opinion, Russell Wilson approached this issue to near perfection.

Even “The Brotherhood” handled it very professionally at the ESPYs. Kaepernick, not so much. Wearing socks with police officers depicted as pigs is not professional.

Colin, take notes on how to send an intelligent and professional message, BEFORE going in front of your country with your opinions. Don’t give me blatant generalities and then prove your unintelligence with your flawed specifics. And please don’t tell me that you honestly feel oppressed; we all know that’s very unlikely. Just do us all a favor Colin, next time you try to make a “stand” for a social issue in America, make sure you educate yourself on the facts and can actually deliver a legitimate message. Next time, don’t make a fool out of yourself, and please realize what you’re doing before you put put your career at risk.

Writer’s Note: All opinions and views are my own. Please tag me on Twitter (@CarterDonahue_) or Facebook (Carter Donahue) with any comments, questions, or concerns. I would love to hear your opinions and thoughts towards Kaepernick, so don’t hesitate to tag me on Twitter to share your take. Also, make sure to follow Sports and Politics (@SandPNews) and Last Word on Sports Inc. (@lastwordonsport) on Twitter for all your sports news and talk!