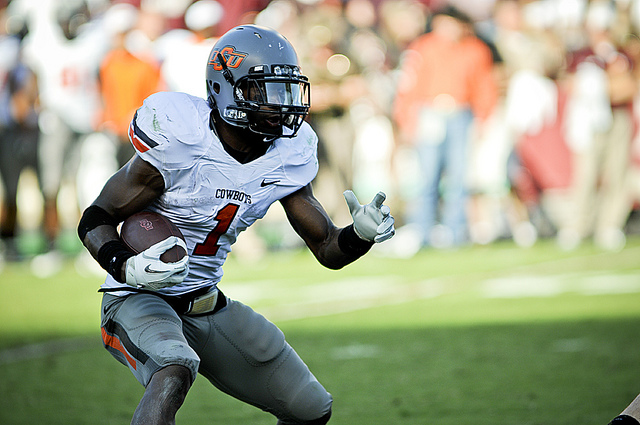 For the fifth time in 17 months, ex-Cowboys running back Joseph Randle has been arrested, this time for aggravated battery.

The 24 year-old Randle was booked in the Sedgwick County, Kansas jail early Sunday morning. Randle is being charged with aggravated battery, possessions of hallucinogens/marijuana and criminal damage to property. The bond for Randle has been set at $100,000.

Earlier this past month, Julius Randle was arrested for an outstanding warrant in Irving, Texas. According to police, Randle had stopped in at his ex-girlfriends house at 3am, but the police were immediately called and Randle was stopped and a warrant was discovered.

Previously, Joseph Randle had been suspended for four games under the leagues personal conduct policy, a week after he was released by the Dallas Cowboys.

Joseph Randle was already away from the Cowboys at this time to deal with personal issues. Randle was in his third year and had started six games for the Cowboys before being released.

In Novemeber of 2015, Randle was arrested and booked on the suspicion of criminal threats, assault of a law enforcement officer, battery, disorderly conduct, criminal trespassing, and interference with an officer after an altercation at a Kansas casino.

Randle was later arrested in February 2015 in in his hometown of Wichita, Kansas. However, in this case the police declined to pursue charges after a domestic disturbance complaint was filed against the running back.

Randle was also detained on charges of shoplifting in October of 2014 at a Dallas mall when police reported that Randle attempted to steal a bottle of cologne and underwear from a department store.

Randle’s dismissal from the Dallas Cowboys was reportedly because of his involvement in sports gambling. Though these claims were heavily denied by Randle.

The Cowboys have multiple chances to Randle and told him to seek counciling to deal with his off-the-field issues and he refused. The fore the choice was given no choice but to release a player that they couldn’t trust.