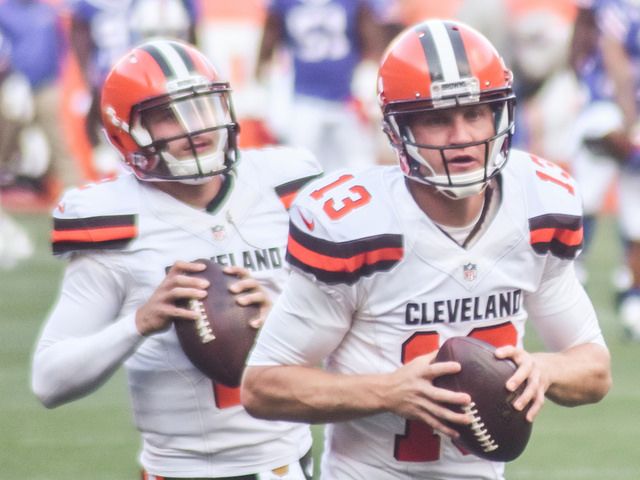 Cleveland Browns head coach Mike Pettine and starting Quarterback Johnny Manziel are about to have it out after yet another drunken Johnny Manziel video surfaced on social media.

The video comes a month after party boy Johnny Manziel was caught red handed on social media for a drunken video during a Browns bye week. That video cost him his starting role and he even lied to the coaching staff about the video.

While coach Mike Pettine is waiting to see the video before having a discussion, it’s absolutely clear that Johnny Manziel is irresponsible and a poor decision maker.

He has already spent 10 weeks in rehab to treat his alcoholism disease but Manziel continues to defy the logical and healthy choice.

“It falls back into not micromanaging personal lives. It’s very public, unfortunately. The thing that’s disappointing is how public it becomes. And it’s something that, with all of our players, we’re going to sit down with them before they get out of here and talk about where they are personally, where they are professionally. And certainly Johnny will be no exception.”

It’s most surprising that Mike Pettine isn’t trying to micro manage Manziel as he cannot obviously be trusted or relied upon because his word has come to mean nothing. The Browns drafted Manziel with such high hopes and so far all he’s done is gotten himself into trouble.

His “I’m invincible” demeanor is very similar to that of Ryan Leaf, second pick of the 1998 draft, who once punched one of his coaches and continually got himself into trouble with the law. It’s clear here that if Johnny doesn’t clean up his act he’ll end up like Leaf, just another draft bust.

This really has to start with the league and the Browns management. They need to strike a massive hand down on Johnny and show him what he is losing. Much like what was done with Josh Gordon another promising Browns athlete that couldn’t keep his hands off a bottle or a marijuana cigarette.

Either way it’s bad news for Johnny and even worse news for a franchise that has made the playoffs once since their inaugural season in 1999.

Image Courtesy of Erik Drost via a Creative Commons License