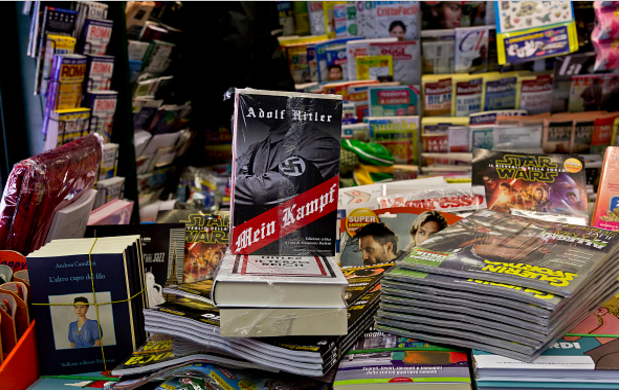 One of the most controversial books in the contemporary history of the world has been annotated and ultimately re-published. Many historians agreed that they wanted to redefine the book, reveal the half-truths, and offer a new look and version of the most hated book in history since the end of World War II. The books was unable to be republished for 70 years as the copyright holders–the Bavarian regional government–refused to republish the book. However, that copyright expired on December, 31st, 2015.

For many, the details in Mein Kampf come as no surprise, for the Jewish population and communities that suffered and died under the Nazism regime of hate, racial profiling, the belief in a superior Aryan race, and mass extermination of the Jews during WWII. Adolf Hitler rose to power during the 1930s as Germany endured one of the worst economic crises in recent history. The war reparation of the onslaught of World War I inflicted massive inflation in the Deutsche Mark Banks that sparked a sharp rise in prices and commodities. Adolf Hitler, from 1924 to 1926, during his incarceration in German prison expressed his opinions, sentiments, and political ideology for the future of Germany and how the world would become under its wild and grandiose visions of the global domination.

CNN reports, “One year on, the German publisher says the book has sold some 85,000 copies and spent 35 weeks on Der Spiegel non-fiction best-seller list.Dr. Magnus Brechtken, deputy director of the Institute of Contemporary History, told CNN the institute was ‘quite surprised’ that public interest in the book was so strong in Germany.” (3 January 2017) The most active buyers are evidently the German people who feel that it is a reminder of the darker history that the country of Germany can never be forgotten. Even though it has been more that 75 five years since the fall of Berlin and major cities captured by the Russian Red Army, the Fuhrerbunker is a gloomy reminder that the shadow of Adolf Hitler continues to haunt the survivors of the Holocaust today.

From the same source, “The Central Council of Jews in Germany is convinced that Hitler’s scorning propaganda ‘Mein Kampf’ must remain prohibited,” but that the group would ‘not object to a critical edition, contrasting Hitler’s racial theories with scientific findings, to be at the disposal of research and teaching.'” The most affected religious communities are the Jewish population, which was practically annihilated throughout Europe in the hands of Nazism. The anti-semitic sentiments pushed for incarcerating and later on sending most Jews to labor camps, death camps, or extermination camps. Almost six million Jewish people died in death camps by the end of World War II.

CNN reports, “When the book’s copyright ran out on December 31, 2015, the Institute for Contemporary History decided to issue the annotated version to expose the ‘lies, half-truths and vicious tirades’ of the Nazi regime, which ended in the deaths of millions of people during World War II.” The Washington Post writes, “Despite the controversy, ‘Mein Kampf’ became an instant success and is still at the top of the country’s bestseller list. Sandner’s tome naturally has a much smaller circulation – only a few hundred copies have been sold so far. But its author said he understands the fascination Hitler still holds for many people.”

There is a mild desire for many individuals in this new world of globalization and fast high tech pace of life to take a step back and remember the great evil of the past. From the same source, “…regards this aspect of the book as typical for the way in which Germans remember their past today: “There’s a strong desire for the authentic in our historical culture… We want to shed light onto the evils of the past while keeping our distance at the same time.” In the world we live in today, there are concerning conflicts that affect our daily lives, and it is important to remind ourselves that they are some evil dictators who are trying to reshape the world to their images and visions of a dictatorial state of supremacy. Hitler was an evil dictator with fanatic ideas of race superiority, world domination, and strong anti-semitic feelings towards the Jews as he blamed them for Germany’s economic crisis and its general downfall.

Sun UK Newspaper reports, “’On the contrary, the discussion about Hitler’s world view and how to deal with his propaganda offered the opportunity to look at the disastrous roots and consequences at a time when authoritarian political ideas and right-wing slogans are again gaining followers,’ Andreas Wirsching, the institute’s director, said.” Of course, there are the far-right movement and party in Germany who disagree and are angered by the new re-edition and “Kritische Edition” are not accurate and does not reflect Hitler’s real political ideology and apparatus manifesto along with the propaganda tool and powerful persuasion speeches to the minds of millions of Germans. Many viewers will be reading this new version of the book on Adolf Hitler and learn that any extremism, dangerous nationalism, and hatred can unleash lethal conflicts around the world.