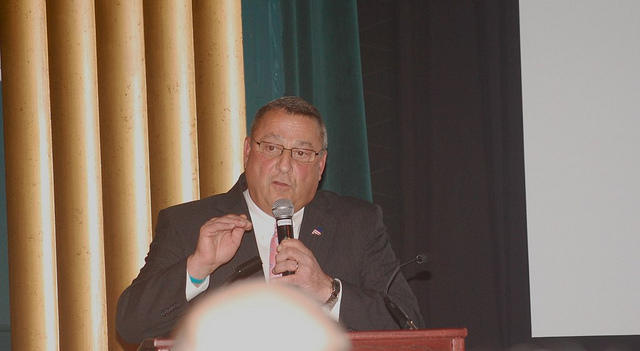 According to Maine’s Governor Paul LePage (R), drug dealers with stereotypically black names have been importing heroin to Maine and leaving pregnant white women behind when they skip town.

The governors response came after a question asked by a woman named Cathy about what the governor had been doing to combat drug use in the state. LePage bolstered a new a bill that would allow stiffer penalties for out-of-state drug traffickers.

Then Governor delivered a signature bigoted line by saying:

“Now the traffickers, these aren’t people that take drugs. These are guys by the name D-Money, Smoothie, Shifty. These type of guys that come from CT and NY, they come up here, they sell their heroin, then they go back home. Incidentally, half the time they impregnate a young white girl before they leave. Which is a real sad thing because then we have another issue that we’ve gotta deal with down the road. We’re gonna make ‘em very severe penalties.”

It got worse when Paul LePage’s spokesperson Peter Steele tried to clean up the mess when he said:

“[LePage] is not making comments about race. Race is irrelevant. What is relevant is the cost to state taxpayers for welfare and the emotional costs for these kids who are born as a result of involvement with drug traffickers.”

LePage also said that he plans to hire 10 new drug agents for the state to combat drug usage and turn his focus to educating young children. My question is how does he expect to educate young kids about drug usage if he can’t discuss the issue without going on a stereotypical rant.

While I do agree on his changing view of prevention vs punishment it should be noted that LePage has went a full 360 from when he came into office, even though he continues to stereotype the poor.

The Republican reversal on policy issues of drug use has been abrupt but has “follow[ed] patterns we’ve seen over decades of drug scares,” says the Sentencing Project executive director Marc Mauer. Mauer also said the shift is because oxycontin and other highly addictive opiates are primarily used by white people, while the rawer form of heroin is perceived to be a predominantly black drug.

While LePage’s comments may have been disgusting Mauer said it best:

“When the perception of the user population is primarly people of color, then the response is to demonize and punish. When it’s white, then we search for answers,”