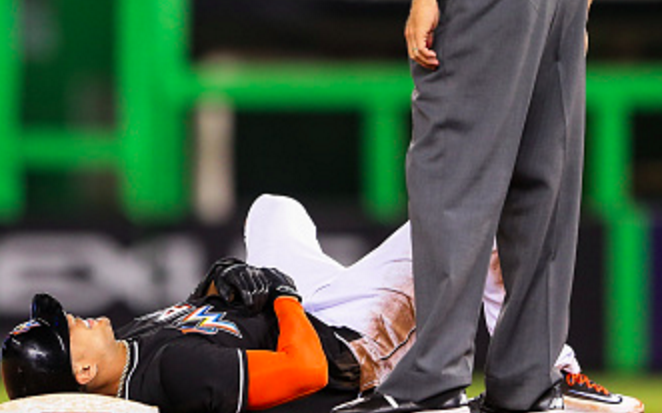 Miami Marlins manager Don Mattingly announced Sunday that right fielder Giancarlo Stanton will miss the rest of the 2016 season with a groin injury. On the field, this development forces the team to find a lot of its run production elsewhere for the remaining 45 games on its regular-season schedule.

There could be more serious repercussions in terms of the business side for the franchise, however. It is walking a tight rope with no net in terms of financial solvency for the future.

Things seemed to be going according to plan until this point. Bringing Mattingly in to manage coincided with some modest spending, as this year’s Opening Day payroll was an increase of 64.4 percent from 2014’s Opening Day figure and the highest since the 2012 season.

That combination has produced a solid shot of finishing the current season with a rare winning record. Anything better than 20-25 over the final 45 games would give the Marlins just their second winning record since the 2003 World Series championship.

More importantly, however, the team is in the thick of the race for the National League’s second Wild Card spot. At just five games over .500 through 117 games, Miami is just a game out of that spot going into play on Sunday, Aug. 14. If the Marlins remain in such contention through the remainder of the season, then Stanton’s injury might just be a blip on the radar screen.

The turnstiles haven’t shown much benefit from the team’s improved production in the win column. Miami’s average attendance of just under 22,000 per game has them dead-last in the NL and 27th in all of Major League Baseball. It’s also nearly identical to what the team has averaged for the past two seasons.

An area which has shown significant improvement, however, may be more important than how many seats in Marlins Park are sold. The television ratings for Marlins games have surged. According to Craig Davis of the South Florida Sun-Sentinel, July was the best ratings month for Miami baseball in four years. While it would be difficult to find out exactly what reasons are motivating people to change their viewing habits, it’s hard to imagine that the Marlins’ winning ways aren’t a significant part of that development.

The bad thing about one positive trend being based on another is that if the cause changes, so does the effect. If the Marlins fall out of postseason contention due to Stanton’s injury or any other reason, the surge in TV ratings could fade along with it back to the norm. That norm is almost as abysmal as the team’s ticket gate numbers.

That could prove disastrous for Miami in the future. The Marlins need to show sustained improvements in TV ratings, and are running out of time to do so. Their current TV broadcast contract with Fox expires in 2020 according to Davis, and upping the value of that deal is crucial for Miami to stay fiscally healthy for the future.

If the year 2020 and Stanton sound familiar, it’s because that’s when Stanton can opt out of his current contract with the Marlins. While it’s no secret that Miami is counting on Stanton to exercise his opt-out clause, the choice is Stanton’s alone. There is nothing that the team can legally do to make him opt out or stand pat.

Stanton’s back-loaded annual contract value jumps significantly in three years, sitting at $26 million for both the 2019 and 2020 seasons. It increases even more after Stanton’s opt-out point. The total guaranteed value of his contract from 2021-2027 is $222 million, with 2028 representing another $25 million if the Marlins don’t exercise their $10 million buyout option for that final season of the deal.

With a new collective bargaining agreement soon to be negotiated, it’s hard to project right now what Miami might get from revenue sharing in the coming years. The current revenue sharing system is expected to be a subject of debate between owners, as owners of MLB’s most lucrative teams are understandably opposed to being beat with their own money.

If the Marlins’ TV revenue sees only a marginal increase, to a hypothesis of about $22 million, that’s going to leave the Marlins hurting financially in light of their salary commitments. Assuming Stanton doesn’t opt out, Miami currently has $44 million committed for 2021. That doesn’t include whatever the salary figure for Conley and Nicolino end up being through arbitration and/or extensions (assuming they are still with the team). That $44 million also assumes that the Marlins buy Gordon out of his final year of his deal.

Using the current payroll as a guide and assuming that both Conley and Nicolino receive $1 million for 2020, that would leave Miami about $28 million to fill their other 21 active roster spots. The Marlins have a few options in this situation, but they all begin and end with Stanton.

The simplest thing would be to put Stanton on the trading block as soon as he informs them that he isn’t opting out. If he continues to produce like he has been on the field and keeps his star power, Miami should be able to move him, although his health will be a huge factor in getting a trade partner to take on the entire remaining value of his contract.

With Sunday’s announcement, four seasons out of Stanton’s past five campaigns have been shortened by injuries. If that trend continues over the coming three seasons, trading Stanton will be much more difficult.

Another option, should Miami either opt to stick with Stanton or fail to trade him, is to fill out the rest of the roster as best they can with the remaining resources. That isn’t going to be the best course of action for the on-field product, however.

Of course, all this changes if Stanton opts out as the Marlins hope. That would give the franchise much more financial flexibility, and they wouldn’t have to face the daunting task of trying to trade a player on the wrong side of 30 years old with a $222 million price tag who also has an injury history.