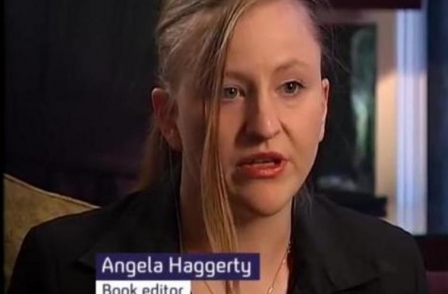 Angela Haggerty is one of very few women in the sports profession as a woman. A profession that is dominated by men and one vicious tweet set the entire sports world for women into revolution.

Haggerty, a sports reporter and considered a pioneer in her field is breaking boundaries and climbing walls but not without online trolls.

Historically females have been assigned human interest stories and minor teams but Haggerty has set out to change that by reporting on Scottish football. A sport dominated by men.

In the many times that she has been on tv, Haggerty received immediate ridicule, religious and sexual slurs.

At one point in 2012 podcast she was even called the  “Taig of the day” after she reported on the collapse of the Rangers football club.

Haggerty said in a powerful interview:

“They responded bizarrely and continued to call me names … then called anyone who replied to them ‘Fenians’, so it was as if the verdict and the sentencing hadn’t deterred some of them. There was even a ‘Free Limmy’ hashtag going around at one point as if people think there’s been some great injustice done to him and I’ve played the victim card. There’s a lot of misogny in the abuse, a lot of stuff directed at me that men wouldn’t get.

Haggerty’s experience showed a brutal reality for the women in the sport profession outside of the United States, not that it is any better here.

One writer commented that it’s Haggerty ability and her confidence along with:

Its nothing more than a fear that has caused the discourse. This fear led one man to tweet about Haggerty saying:

Haggerty continued by defending herself by saying:

“My crime? Being a mouthy woman who insists on doing her job. That job included editing a book about Rangers’ financial collapse in 2012, which has led to a nearly four-year long sustained campaign of abuse. The most serious episode of it led to a six-month prison sentence for one man who went on an online podcast to deliver a tirade of threatening comments and encourage listeners to do the same, to which they duly obliged, much to my terror one evening when I found myself alone in my home with a stream of men online asking me if I’d ever been sexually assaulted.”

I ask what kind of online world is this that a woman who wants to do her job is at the behind of thousands and thousands of hate messages. A court case didn’t even stop the hate. It has seemed that this has became a bitter bitter sad reality for some influential women who try to change the perspective of society and defy the norm. It’s time for an immediate change because this can go no longer.

We need to be applauding Angela Haggerty because despite litigation and a slew of hate she wakes up every morning and reports. Because she knows that she has to be that change for the women of tomorrow and become a role model girls can be proud of.