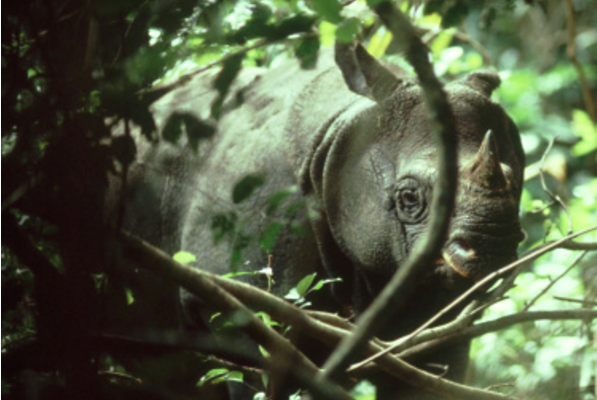 The rhinoceros has been a staple of the African and Asian landscape for nearly a million years. Yet today they are on the brink of extinction. All five species of rhinoceros are endangered, with only around 30,000 left in total. Even more disconcerting, the Javan rhino of Indonesia is the world’s rarest land mammal, with only 50 remaining in the wild.

What is destroying the population this giant mammal? Well, as is the case with most of the animals on this list, the unfortunate answer is related directly to humans. Human poaching has decimated the rhinoceros’ population in recent years. The Javan Rhinoceros is the species struggling the most in the wild. The Javan rhino was one a staple of Southeast Asia, with a natural habitat stretching from Thailand, Vietnam, and Malaysia all the way across to Indonesia. Today, the Javan rhino is only alive in one area of the world, the Ujung Kulon National park on the island of Java in Indonesia. As little as six years ago there were reports of the Javan rhinoceros on the continent in parts of Vietnam but they have now all been poached for their horn.

World Wildlife Organization estimates there are only 50-60 individuals living in this protected park. The Javan rhino is special because it has a smaller than normal horn, usually shorter than 25cm. This small horn can be directly linked as the source of the animals’ demise. Rhinoceros horn is made of keratin, the same thing as human fingernails, is increasingly rare and becoming one of the most valuable natural resources in the world. Rhinoceros horn is used in many southeast Asian societies, specifically Vietnam, for their medicinal properties in traditional Chinese medicine.

The outbreak of rhino poaching started around 2007 when a rumor began to spread in Vietnam that rhino horn could be used to cure cancer. This demand has turned the illegal trafficking of rhino horn into a $20 Billion dollars a year industry. A 2014 study shows that the price of rhino horn has sky-rocketed to between $60,000 and $100,00 USD for each pound. That is worth more than gold, cocaine, and diamonds. The probable reason for such staggeringly low numbers with the Javan rhinoceros can be attributed to its close proximity to the southeast Asian markets. It makes it much easier for poachers to transport the rhinoceros parts.

Protection programs have been put into place to try and keep this critically engendered animal safe. The International Rhinoceros Foundation has set up a patrol of the Ujung Kulon national park for the past 19 years. Sadly, the Ujung Kulon park is considered by the organization to almost be at capacity for the Javan Rhino as only around 40% of it is an adequate habitat for them. This is largely because of a plant called the arenga palm, an invasive species that is pushing out the natural food sources of the Javan rhino. The same protection units that are patrolling the conservation area are cutting down this invasive plant so that the livable area for the Javan rhino can expand. Ultimately, the goal will be for the Ujung Kulon park to not only be a protection zone for the rhino, but also a staging area where the rhinos can safely give birth and raise their young before being introduced to other habitats.

The Javan rhinoceros is the world’s rarest rhino, the attraction of a big-time payday is too much for some people who can’t resist the temptation of poaching. But if humankind wants to keep rare breed of rhinoceros from the jaws of extinction, we will have to act now.