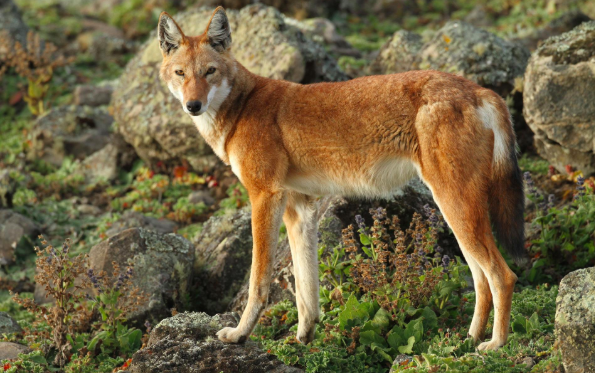 This is a series that will be dedicated to raising awareness about the rapid decline of the Earth’s flora and fauna. Each issue will take a close look at a specific species of plant or animal. Dissecting the issues affecting the species; conservation efforts; obstacles conservationists are trying to overcome; and how successful these efforts have been. The world is a beautiful and diverse place. However, humans are going to destroy that diversity. The International Union for Conservation of Nature (IUCN) estimates 46% of the world’s species are threatened, endangered, or already extinct. The human race must act quickly and decisively if they are to reverse the terrible destruction that has occurred to the planet.

Meet the continent of Africa’s most endangered carnivore, the Ethiopian wolf. The Ethiopian wolf, which lives in the mountains and highlands of northern Ethiopia, is thought to have a population of around 400 individuals. The species was not studied in-depth until the mid 20th century and are still a very elusive group. Weighing in at only around 25 pounds, the Ethiopian wolf is a not the largest predator; picture a small coyote. Because of their size, the Ethiopian wolf’s diet consists of rodents, waterfowl and mountain antelope calves. Although they are social animals, living in packs of around ten, they are one of the few canines who hunt alone.

As is common with most canine species, rabies has become an epidemic among the Ethiopian wolf community. In 2003 a rabies outbreak killed at least 30 individuals that lived in the Bale Mountains. Since then, the pandemic has not slowed down. The African Wildlife Foundation estimates that the overall population has declined 30% since 2008 because of rabies and distemper. As the population has decreased, genetic diversity has also become a major issue for this endangered canine. Inbreeding has created a number of birth defects, the most troubling of which has been infertility as it is estimated that only 60% of female wolves are capable of reproduction.

While disease has been a major factor in the rapid decline of this elusive animal, as is the case with nearly every endangered species, humans have played an integral part in their demise. Overgrazing of livestock and the encroachment of humans has diminished the hunting range of the Ethiopian wolf. These elusive animals have been forced to move to higher altitudes where there is much less prey. Many of the grasslands used by the rodents have been converted to barley fields in the northern highlands and the increase of roads and human migration have fragmented populations making inbreeding even more common. Since 1993 five different wolf communities have gone extinct, with the most recent being on Mt. Guna in 2011.

There have been a number of attempts by the Ethiopian governments to keep the Ethiopian wolf from going extinct. The killing of a wolf carries a jail-sentence of at least two years and the sale of wolf parts is strictly prohibited. The Ethiopian wolf is the first species where cloning has begun in an attempt to save the population. Dr. Hwang at Seoul National University.

In January of 2016, Hwang created a partnership with Arsi University to begin collecting DNA of individual wolves. The DNA specimens are then sent to South Korea. This DNA can then be used to clone that individual when that wolf dies. By doing this genetic diversity is maintained and prolong the breeding time of each specific wolf. Since the wolves are very similar to domesticated dogs they can be used as surrogate mothers. While this is an exciting new conservation technique, many think that it is a fruitless venture since the problems of rabies and human encroachment are still present.

To help stop the spread of rabies and canine distemper, the Ethiopian Wolf Conservation Program was founded by Oxford University. This program focuses on vaccinating wolves by injecting the vaccine into bait traps. Preliminary studies have shown that 90% of wolves who have eaten the bait have developed an immunity to the diseases. The overall goal is to create an immunity to rabies and distemper in 40% of the Ethiopian wolf population. The program has also begun vaccinating the local dog population as they are the main spreaders of rabies and canine distemper. This strategy has worked with other species, most notably the European red fox. The combination of vaccinated baits and vaccinating local dogs completely eliminated rabies amongst the fox’s population.