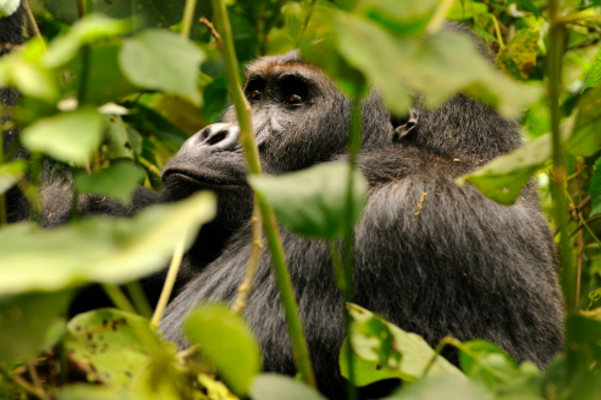 The Eastern Lowland Gorilla are formidable creatures standing almost five feet tall and weighing a staggering 440 pounds. Unfortunately for this human relative, their population has been ravaged by disease, loss of habitat, and as usual, poaching. A native of the of the mountainous rain forests of the Democratic Republic of Congo in eastern Africa, they have become the innocent victims of the war and unrest in that area of the world. There is a certain amount of stigma against these giant primates, despite their peaceful, even friendly behaviour, they are often killed by locals due to their size.

Because of the violence in the Democratic Republic of Congo, it is impossible to know the exact amount of Eastern Lowland Gorillas that exist today. However, World Wildlife Organization estimates that they only inhabit 13% of their historical range, and that in the mid-1990s there were around 17,000 gorillas living in the Kahuzi-Biega Natonal park. It is estimated that this number has shrunk by at least 50% in the last 20 years to possibly as low as 3,800.

The most obvious reason for the diminishing number of Eastern Lowland Gorillas can be attributed to the poaching that swept across the Democratic Republic of Congo after the start of their civil war. When the Second Congo War began in 1996 began due to the refugee crisis that arose after the Rwandan genocide in the mid-1990s. Hundreds of thousands of Hutu refugees fled their native Rwanda to neighboring Congo. They did not flee far enough as Tutsi soldiers crossed over the border to attack these refugee camps. This prompted the Hutu to organize themselves into militias.

The ensuing war would end up involving over nine African nations, and even though a peace agreement was signed in 2003, the bloody fight rages on. These same militia groups were not satisfied with the terms of the aforementioned agreement and continued the war. As they were considered rebels by international governments, they had to go into hiding, the mountains of the DRC were a perfect spot.

These armies needed a food source, and the massive gorillas were the preferred prey due to their abundance of meat and peaceful, unaggressive nature. While the poaching for food has become one issue, another major problem has been their loss of habitat. As previously mentioned, it is estimated that the Eastern Lowland Gorilla has lost 87% of its habitat. Much of this is because of illegal mining, for diamonds (also known as conflict or blood diamonds), coal and gold by these militias, as well as illegal logging. Both products are used to finance the ongoing civil war in the area. In recent years, rebel groups have begun mining for a new product. Coltan is the new must-have resource of the militia as it is used in the manufacturing of mobile phones, tablets and laptops. These two activities have decimated the forests that keep the large gorillas protected from things such as poachers, while also destroying large amounts of their food source as gorillas survive on an herbivore diet.

The area that these gorillas live in has been fought over profusely by the Congolese government. The main area is known as the Virunga National Park, which was Africa’s first national park after being established in 1925 and is a World Heritage Site. A 7,800-square-kilometre stretch of land that encompasses the Virunga mountains, it contains nearly all of the worlds remaining Eastern Lowland Gorilla. It also happens to be the most volatile national park in the world, with over 150 park rangers being killed by rebel factions and local mai-mai militia in the last ten years. A survey done by the World Wildlife Fund found that 82 percent of the 570 rangers have faced a life-threatening situation. The lack of funds are staggering as most rangers do not even have adequate footwear or even socks. Until an international or local government is able to get ahold of this park, the long term future of this species is bleak. Some scientists predict that the Eastern Lowland Gorilla will be extinct by 2050 if the fighting does not end.

As The Donald Turns; Say Anything

Marijuana Legalization and How It Affects Societies Around The World