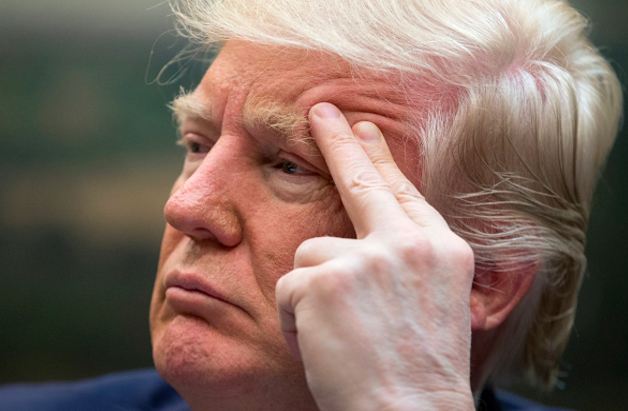 The staff at As The Donald Turns is getting dizzy with this episode as we look at all the new “Flips and Flops,” from POTUS 45.

• To start with, on Thursday, the US dropped the largest man-made, non-nuclear bomb, on a network of tunnels and caves in Afghanistan. The network was alleged to be a way for Isis fighters to get around. We are not making assessments on whether or not it was the right thing to do. We are not making assessments on whether or not he should have gotten congressional approval. Congress long ago abdicated its military authority to this particular president in a way they were not willing to with his predecessor. We note this because Donald is on his way to Mar a Lago. It was just a few years ago when President Obama was considering an air strike on Syria prior to going on vacation, that he was vilified by Donald. “Glad the President can take another tax payer funded vacation after announcing there might be military action on Syria,” said Donald in a tv interview at the time. Uh, Donald, you have authorized military action three times in the last week, (and this week’s in Syria may have been an awful blunder), and you are headed to your actual home in Florida….on a plane….funded by taxpayers. Just some flipping and flopping to think about while you golf for the 14 times in 12 weeks.

• Speaking of Mar a Lago, we assume they have flipped and/or flopped to, you know, sanitary conditions….maybe a bottle of Pine Sol. Last month, prior to the visit by Donald and Japanese Prime Minster Abe, the county department of health nailed Mar a Lago with 13 health code violations. According to a report by the Miami Herald, the inspectors found 13 violations in the resort’s kitchen, including undercooled meat and dangerous fish. The inspectors deemed three of the violations to be “high priority,” which means that they could cause the presence of bacteria on dining room plates. We knew Donald had some buildings that were once in slumlord conditions. Is there such a thing as “Slum Club?

• Donald has flipped and flopped on China….well in Donald speak, it is “Chyyynnna.” Throughout the campaign, he accused China of current manipulation, this giving their goods an advantage in the global market. “On day one of a Trump administration, the US Treasury Department will designate China a currency manipulator,” he told the Wall Street Journal. Like most of his Day 1 promises, it never happened. This week, after last week’s meetings with President Xi, Donald said China is not a currency manipulator. So, what changed from last year to this year? Absolutely nothing. Well maybe, that Donald realized that the tough guy on the campaign routine does not fly when you are president, except with the more gullible of his supporters. He says China listened to what he said and changed its policy. Real life says China’s currency policy is exactly what it was on this day a year ago. It is only Donald with the flip flops.

• No flip flops with Maria Bartiromo. Her former employer, CNBC often had to defend her credibility as she had cozy relationships with business people that she covered on a daily basis. The same reputation has followed her at the Fox Business Network. Thus when she did an interview with the president that bordered on high school giddiness, it was appropriate to her credibility level. She asked about how understaffed the administration is. The correct answers are that Trump put a hiring freeze on federal jobs so as to save money; and that he was totally unprepared for the job of staffing; and that many of his choices still have not passed background checks. Bartiromo let him verbally wander around though.
“For example, was it a mistake not to ask Jim Comey to step down from the FBI at the outset of your presidency? Is it too late now to ask him to step down?”
TRUMP: “No, it’s not too late, but, you know, I have confidence in him. We’ll see what happens. You know, it’s going to be interesting. Don’t forget, when Jim Comey came out, he saved Hillary Clinton. People don’t realize that. He saved her life, because — I call it Comey won. And I joke about it a little bit. When he was reading those charges, she was guilty on every charge. And then he said, she was essentially OK. But he — she wasn’t OK, because she was guilty on every charge.” So called Judge Trump decides without knowing facts, that Hillary was guilty, and he blames Comey for letting her off, but he has faith in Comey, but Comey protected Hillary. All a straight line right there. Oh, and Bartiromo’s journalistic follow up to that rambling? “Yes.” Those journalism classes served her so well. Nice follow up.

• Maria’s interview with Donald also brings us back to Mar a Lago and Chinese President Xi, (we don’t flip flop here. We just go in big circles). She asked how Donald informed Xi about the attack on Syria as the two of them ate dinner during the missile launch. Donald talked about how they were eating dessert. “I was sitting at the table. We had finished dinner. We’re now having dessert. And we had the most beautiful piece of chocolate cake that you’ve ever seen and President Xi was enjoying it.” Seriously? He can’t just say it was chocolate cake? It has to be the best ever? Did the health inspectors eat any? Anyway, he explains that he told Xi what was happening. “We’ve just fired 59 missiles, all of which hit, by the way, unbelievable, from, you know, hundreds of miles away, all of which hit, amazing.” Will it kill you to tell the truth? Not all of them hit. Your Pentagon says one overshot and went into the Mediterranean. Just own up to it. It doesn’t make you less of a president that a missile missed. Only that you can’t tell the truth about the most simple of things.

• Donald has flip flopped on Shadow President Steve Bannon. Donald told the New York Post this week , “I like Steve, but you have to remember he was not involved in my campaign until very late.” He also claimed not to have known him well when he hired him. The truth is Donald hired him in August, four months before election day. At the time Donald claimed to have known Steve, (and Kellyanne Conway whom he brought on at the same time), for many years.

• Donald flip flopped on NATO this week. Throughout the campaign he declared that NATO was obsolete and he said other countries needed to pay their fair share. You can imagine the loud cheers from the internationally uniformed cheering wildly. They had no idea that all countries were already under a financial agreement up to 2024. This week, after meeting with NATO Secretary General Jens Stoltenberg, Donald said NATO listened to him and is no longer obsolete. So what did NATO change? Not a thing. The financial agreements are the same. The mission statements are the same. The objectives are the same. The only thing different is Donald’s flip flops.

• One other flip flop has us very concerned….it’s not Donald…it’s a survivalist food company. The Wise Food Storage company has long been a favorite among doomsday preppers. For just under $2,000 you can buy food in the “Extreme Bugout Package that can be stored for at least 12 months. They used to advertise on Fox on a daily basis. Why? Well clearly the right wingers feared soft talking, congenial, professorial President Obama was going to take us to Armageddon. The company has since shifted much of its TV advertising to MSNBC. Ummmm….are they trying to tell us something about Donald and the flips and flops?